Extend research from labs to the land: Modi at 105th Indian Science Congress 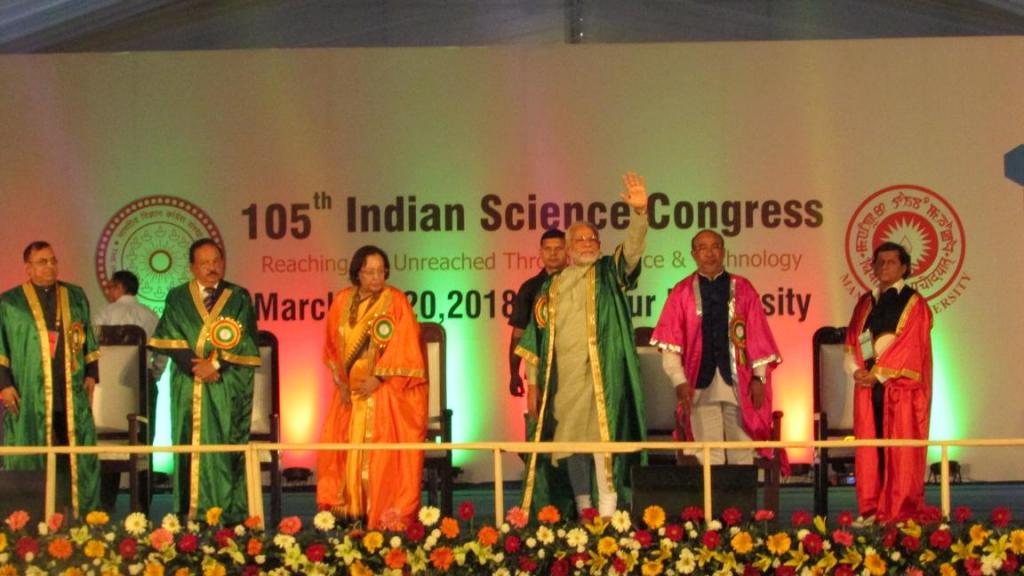 “The time is ripe to redefine 'R&D' as 'research' for the 'development' of the nation,” says Prime Minister Narendra Modi today while inaugurating the 105th Indian Science Congress at Manipur University. 'Reaching the Unreached through Science and Technology' is the focal theme this year.

Speaking on the occasion, Prime Minister Modi said that hosting Indian Science Congress in North East second time over a century is a testimony to the resurgent spirit of the North East. Imphal becomes the second city in the North East to host such a prestigious event after Shillong in 2009.

Science, according to him, is a means to a far greater end; of making a difference in the lives of others, of furthering human progress and welfare.

He informed the audience that 'Ethno-Medicinal Research Centre' has been set up in Manipur to undertake research on the wild herbs found in the North-East region, which have unique medicinal and aromatic properties. He also referred to the State Climate Change Centres set up in seven northeastern states. “Our scientific achievements need to be communicated to society. This will help inculcate scientific temper among youth. We have to throw open our institutions and laboratories to our children,” he says.

Urging the scientists to develop a mechanism for interaction with school children, he appealed to all the scientists participating in the congress to spend 100 hours every year with 100 students of class X, XI and XII to nurture young scientists.

“We are committed to increasing the share of non-fossil fuel-based capacity in the electricity mix above 40 per cent by 2030,” says the Prime Minister. “India is a leader in the multi-country Solar Alliance and Mission Innovation. These groupings are providing a thrust to R&D for clean energy,” adds Modi.

To help address brain drain from the country, a 'Prime Minister’s Research Fellows' scheme has been approved, under which, bright minds from the best institutions in the country like IISc, IIT, NIT, IISER & IIIT will be offered direct admission in Ph.D in IIT & IISc, he adds.

Stating that India has a rich tradition and a long history of both discovery and use of science and technology, he says, “It is time to reclaim our rightful place among the frontline nations in this field. I call upon the scientific community to extend its research from the labs to the land.”

In his 30-minute speech, Prime Minister also informed the gathering that Manipur will benefit from the newly amended National Bamboo Mission. In his speech, Manipur Chief Minister N Biren Singh said that hosting such a scientific extravaganza in the small state will give "enriching knowledge and experience to the students, scholars and particularly, the people of Manipur”.

Expressing that this event will be a game changer for all of us, he also urged the students and scientists of the region to acquire the spirit of scientific enquiry and scientific temper and to think critically out of the box for a better society.

The inauguration function was also attended by Manipur Governor Dr Najma Heptulla and Union Minister of Science & Technology Harsh Vardhan, among others.