The rate of climate change accelerated in the period 2001-2010—the warmest decade ever recorded worldwide, the World Meteorological Organization (WMO) said in its preliminary findings for its report titled Decadal Global Climate Summary. Dramatic and continuing sea ice decline in the Arctic was one of the most prominent features of the changing state of the climate during the decade (see 'Decade of extreme weather events', and map). 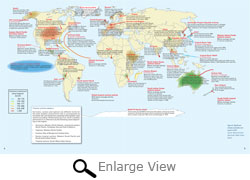 Also, the year gone by, 2011, was the 11th warmest year since 1850, WMO said in its recently-released Status on the Global Climate report. Globally-averaged temperatures in 2011 were estimated to be 0.4°C above the 1961-1990 annual average of 14°C. This was despite La Nina, a weather event where the sea surface temperature is lower than usual in the tropical Pacific Ocean and has a cooling influence. It was not just temperatures though; significant flooding occurred in many places throughout the world, while major droughts affected parts of east Africa and North America.

But are these changes a result of climate change or are these a result of natural variabilities? It is believed that science is not advanced enough to distinguish between the two in quantitative terms. The 2011 annual assessment confirms that climate change is happening now and is not some distant future threat, said Michel Jarraurd, secretary general, WMO.

Kevin E Trenberth of the National Center for Atmospheric Research, in his recent paper—Framing the way to relate extremes to climate change—says it is a wrong question to ask in the first place. No events are “caused by climate change” or global warming; all events make a contribution. Moreover, a small shift in the mean temperature can still lead to very large percentage changes in extremes. Thus, all weather events are affected by climate change because the environment in which they occur is warmer and moister than it used to be. While Trenberth admits that extremes are expected to happen as the climate record gets longer, he also adds that certain extremes related to heating are becoming more evident.

He explains in his paper: “Climate extremes are typically treated individually, but many are not unrelated. As climate varies or changes, several direct influences alter precipitation amount, intensity, frequency and type. Warming accelerates land-surface drying as heat goes into evaporation of moisture, and this increases the potential incidence and severity of droughts, which has been observed in many places worldwide.”

Climate model simulations and empirical evidence confirm that warmer climates, because of increased water vapour, lead to more intense precipitation events even when the total annual precipitation is reduced slightly. A warmer climate therefore increases risks of both drought—where it is not raining—and floods—where it is—but at different times and/or places.