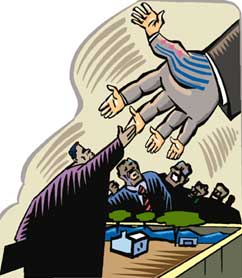 A 4,500 year-old skeleton of a man recently discovered in Mexico could be the earliest example of dental work in the Americas, claim scientists. The skeleton, dating back to around 2,500 BC, was found buried in volcanic ash in a remote mountain of western Mexico. The man's upper and front teeth had been cut off, possibly to insert ceremonial denture made from wolf or jaguar fangs, say researchers. They say it was possible the man's teeth had been cut off for cosmetic reasons or to indicate special status, perhaps as a priest or shaman. The man could possibly be between 28 to 32 years old and may have died from an infection related to his dental work. "They cut his teeth off right down to the gum and exposed the pulp cavity, and he had two abscesses in his mouth at the time he died. Blood poisoning is a possibility here," said archaeologist and palaeontologist James Chatters.