A question of sales: Natural farming faces challenges in Himachal; here is how 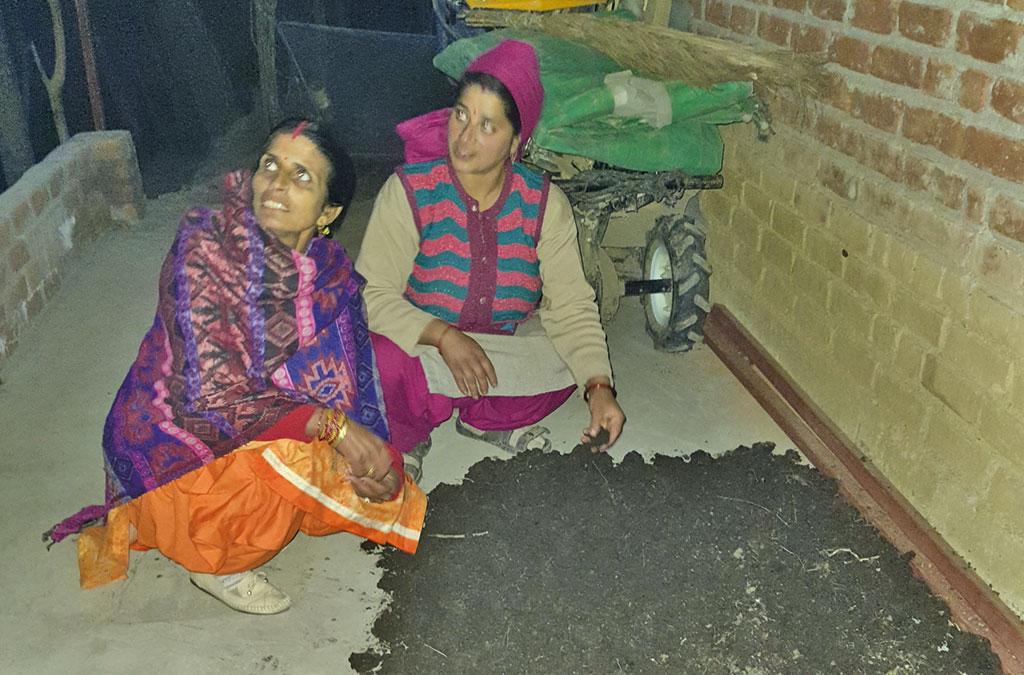 A question of sales

In 2018, when the Government of Himachal Pradesh decided to bring the entire state under natural farming and launched the Prakritik Kheti Khushhal Kisan Yojana (PK3Y), the scheme was hailed as a timely intervention.

Agriculture in this Himalayan state has been facing challenges in recent years due to changing temperatures and rainfall and snowfall patterns. Officials with the state’s agriculture department admit that there has been a 161 per cent increase in the use of chemical fertilisers between 1985-86 and 2019-20.

The use of pesticides has also increased among farmers. This affects their health and pushes them into the debt trap while harming the sensitive ecology of the region. PK3Y aims to increase farmers’ income by maintaining harmony with nature and adopting low-cost climate-resilient farming practices.

So far, more than 174,000 or 18 per cent of farmers in the state, have opted for the scheme, bringing about 1.7 per cent of the total cultivable area under natural farming, according to data with the agriculture department.

Early this year, researchers with the Centre for Science and Environment (CSE), an advocacy group based in New Delhi, visited Solan, Shimla, Bilaspur and Mandi districts of the state to assess how the scheme has fared so far.

Farmers say the practice has helped improve crop productivity and land fertility, while drastically reducing farm input costs. However, they struggle to realise the real benefits of their efforts due to a lack of access to markets and assured prices for their produce. Besides, the farming system promoted by the government does not always work.

The PK3Y scheme promotes the Subhash Palekar Natural Farming (SPNF), named after a Maharashtra-based agriculturalist who has been promoting the system for the past few decades.

SPNF emphasises on preparing and using on-farm inputs to stimulate plant growth and to manage pests and diseases. Under the system, beejamrit and jeewamrit biostimulants, a source of microbes that convert nutrients present in the soil into forms that can be used by plants, are prepared mixing cow dung and urine with jaggery and pulse flour.

Crop residues are used for mulching or achhadan. Formulations like neemastra (cow dung, urine and neem leaves), brahmastra (leaves of fruit plants such as mango and guava and cow urine) and sour buttermilk are recommended for pest and disease management. 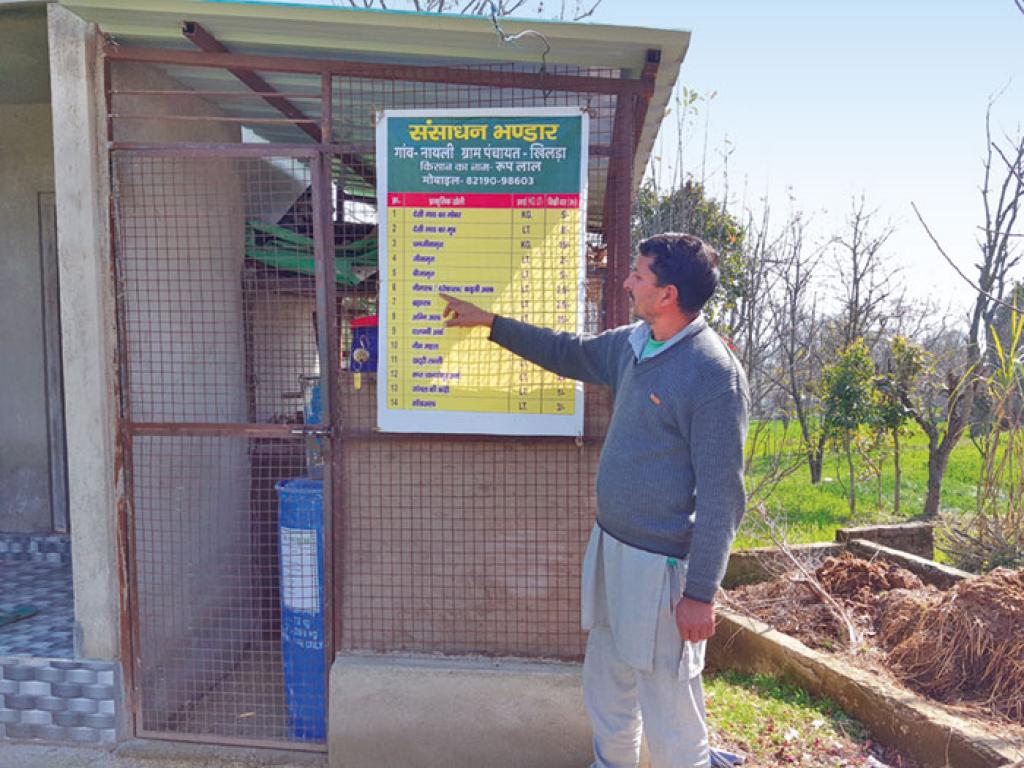 “Preparation of SPNF inputs saves the cost of buying chemical fertilisers and pesticides. Our expenditure on inputs has decreased drastically from Rs 15,000-20,000 per bigha (1 bigha equals 0.08 ha) to Rs 500-700,” Radha Devi, a farmer from Koti village in Solan, who shifted to natural farming to grow tomatoes and capsicum, said.

“Earlier, tomato crops would last from March to June. Now they bear produce till August. As a result, I now harvest 50-60 crates of tomatoes from my 0.5 bigha farm from the earlier 30-35 crates. I also get 35 packets of capsicum compared to 20-22 earlier,” Devi said.

Under PK3Y, farmers like Devi have received training on making and applying the natural inputs and subsidies to buy native cows (their dung and urine is recommended for use) and drums for storing the inputs. “We will continue this farming, even if the government does not provide further support,” she added.

Farmers are harvesting more as PK3Y encourages multi- and mixed-cropping. In Bilaspur district, Nanak Ram from Manvan village used to grow only wheat on his 3 bigha farm. Now, he has taken up peas, coriander and radish.

“We need less amount of seeds as sowing under natural farming is done in lines. Crops also require less irrigation because of the particular mulch we use,” said Gagan Pal from Sayar village in Bilaspur. “Even if there is excessive rainfall, crop damage is relatively low,” he added. 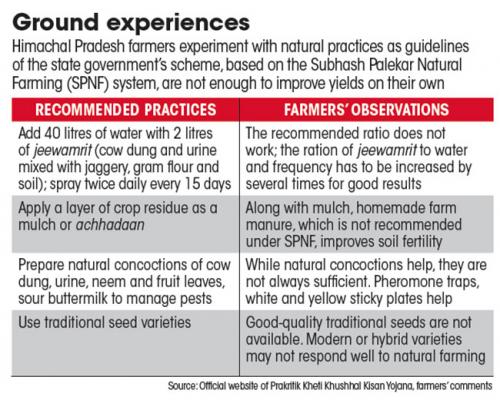 Several farmers, however, acknowledge that they had to improvise on the SPNF practices prescribed by PK3Y to improve crop yields.

Several farmers use farmyard manure to improve soil fertility and pheromone traps and  sticky plates to manage pests, which are not part of SPNF practices.

While PK3Y has increased farmers’ income by way of reduced input costs, the scheme does not facilitate marketing support or guarantee fair and remunerative prices.

“When we try to sell crops, traders and intermediaries cheat us and we struggle for fair prices,” Devi said.

Sushma Chauhan, a farmer from Shimla, added, “My apple plants under natural farming are healthier and yields are equal or more than those with chemical-based farming. But often, the size and colour of the fruit do not match the market’s demands.”

Rajeshwar Chandel, executive director of PK3Y, said, “The state government is working on measures to improve marketing support for farmers, including with dedicated spaces for naturally farmed produce and retail outlets in cities like Shimla and Delhi. It also plans to mobilise farmer-producer organisations and to introduce self-assessed certification for farmers to authenticate natural produce, which would aid in sales.” Most of these steps are either in the initial stage of implementation or still being planned.

Ensuring market access and fair and remunerative prices could be a real game-changer for natural farming. This support can be provided by building a robust supply chain, opening mandis in local areas and providing better infrastructure.

Some lessons can also be taken from other states. To promote millet cultivation, Odisha procures the crop at minimum support price and has included it in mid-day meals. To promote organic farming, Karnataka supports organic farmers in making their own regional cooperatives that procure, process and market products. Some 11 states have developed their own brands.

Other farmers say that because external labour and farm equipment are not always available, their entire families work in the field. Hence, adoption of natural farming is not easy; it requires dedicated efforts from the farmers and their families.

To ensure that their hard work pays off, state and Union governments must invest in research and innovation to ease the transition. The first step can be to include all kinds of chemical-free practices so cultivators understand what is best-suited to them.

This was first published in the 1-15 September, 2022, edition of Down To Earth