Neighbour’s envy: India’s jute economy is faltering while Bangladesh’s is flourishing; here’s why

Lack of market, government procurement and diversification, poor infrastructure as well as the sorry state of Indian jute mills is responsible, say experts 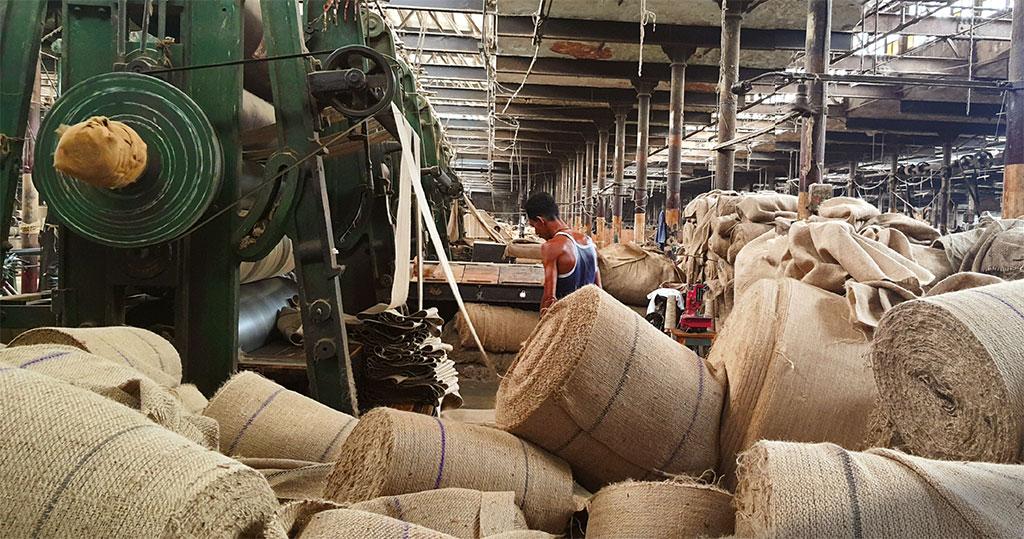 The director of Hukumchand Jute Mill in North 24 Parganas says it has become difficult to find workers willing to work in a jute mill due to low wages (Photo : Shagun)

“Just 10 years ago, this whole area was under jute, as far as the eye could see. Not anymore,” Narayan Ghosh said while pointing at a vast stretch of farmland in Saguna village of West Bengal’s Nadia district.

“The vegetation was so dense and the plants so tall, over three metres, that the traders who came to buy jute did not dare to enter the fields alone for fear of being lost,” Ghosh, a farmer who owns 0.5 hectares (ha) in the village, said.

Ghosh’s words best capture the decline of India’s jute economy. Production of the cash crop has fallen by over 13 per cent in the past decade —  1.77 million tonnes in 2021-22, from 2.03 million tonnes in 2011-12 — according the third advanced estimates released by the Union Ministry of Agriculture and Farmers Welfare in May 2022.

Jute can be highly profitable. Its leaves are sold in markets as a vegetable even before the crop is harvested. The inner stem can be used to manufacture paper while the outer layer produces the fibre. What, then, ails the jute economy?

“There is no market for it,” Ghosh said. Ten years ago, he used to grow jute across his 0.5 ha, but gradually reduced and stopped cultivating the crop by 2011, shifting to horticulture crops.

When the prices fell, the Jute Corporation of India (JCI) Ltd, a Government of India enterprise for procurement of raw jute from the growers at the minimum support price, barely intervened.

This reflected in official procurement figures as well. Between 2007-08 and 2021-22, the quantity procured by JCI decreased to 0.014 million tonnes, from 0.14 million tonnes.

The poor procurement figures came despite the government being the largest buyer of jute bags, which form the highest share of the total jute products manufactured in the country.

There is a special law — the Jute Packaging Materials (Compulsory Use in Packing Commodities) Act 1987 (JPMA) — that provides for use of jute packaging material for foodgrains. Under this Act, the government issues orders from time to time for mandatory use of jute packaging.

Since 2017, the norms provide that 100 per cent of foodgrains and 20 per cent of sugar should only be packed in jute bags. Due to this, jute sacks account for 75 per cent of the total production of the jute industry.

Ninety per cent of the jute sacks are supplied to the Food Corporation of India and state procurement agencies, according to a Union government press release dated November 10, 2021, while the remaining are exported or sold directly. It also says the government purchases jute sacks worth Rs 8,000 crore every year from mills. 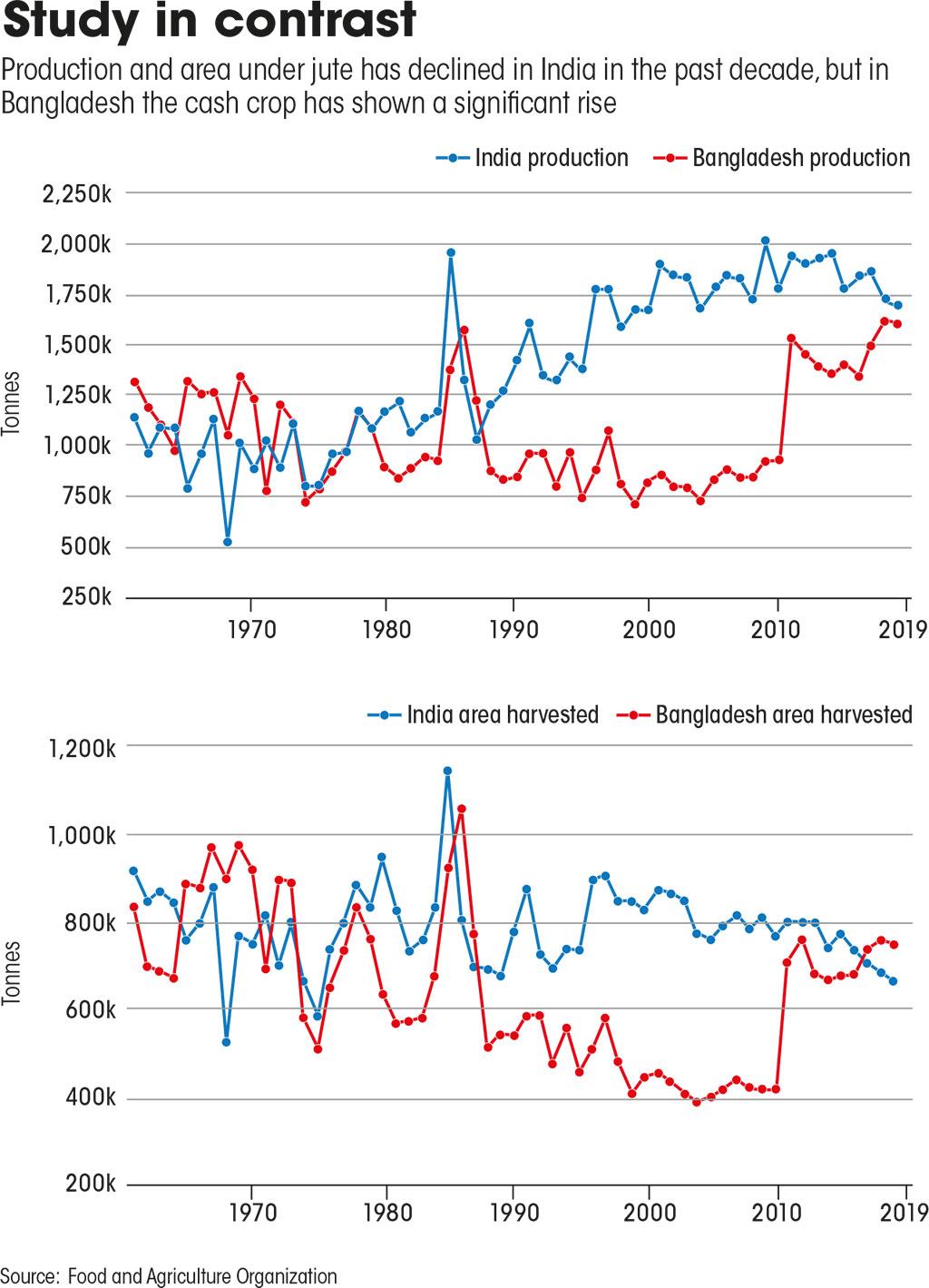 The CACP report said imports from Bangladesh had adversely affected the domestic industry, given that the landed price of jute and its products from the neighbouring country was less than the domestic rate.

Bangladesh has traditionally enjoyed a comparative advantage in export of jute products because of its low cost of production driven by lower wages, favourable power tariffs, cash subsidy for export and better fibre quality.

Quality, in particular, has been a sore point in India’s jute cultivation. Jute in India is marred by poor infrastructural facilities for retting, a process done after harvesting of the crop.

Under retting, jute bundles are kept under water at a depth of about 30 cm. This process gives the fibre its shine, colour, and strength. It should ideally be done in slow moving, clean waterbodies like rivers. But Indian farmers do not have access to such resources.

Sajjan Mallick, who has 1 ha under jute in Saguna, said there was no free flowing water body in his village. He pointed to a small pond, where hundreds of farmers submerge their jute bundles in muddy water for days.

“When we take them out, there is a discolouration,” he said. There is another bigger pond at a distance, but with jute being a bulky crop, moving bundles raises labour costs.

To overcome such concerns, the Central Research Institute for Jute and Allied Fibres (CRIJAF) under the Indian Council of Agricultural Research has developed a model retting tank with slow moving water. “We have the technology, but it needs promotion and adaptation,” Gouranga Kar, director, CRIJAF, said.

Bangladesh also does well in exports because it has three to four different kinds of subsidies. For instance, it gives 9-10 per cent export subsidy for food-grade packing bags, which is much higher than India’s 1.5-3 per cent subsidy.

Another reason for the country’s success is its capturing of the diversified jute products market, for which there is a huge international demand. India’s major jute exports, in contrast, are sacking and hessian bags.

Moloy Chakraborty, the Jute Commissioner of India, pointed out that diversifying into other products can open new avenues for the sector and reduce its dependence on the government. “Being environmental friendly, jute has a huge potential in the diversified goods market, especially in regions and nations that have banned plastic,” he said.

High-end fashion brands are also coming out with more jute products such as sandals. With India’s high production, it should be in a position to capture this market. “Some 85 per cent of our jute is consumed domestically, while 15 per cent is exported. The situation is reverse for Bangladesh,” Kar said.

“Diversification is key if India wants to make the jute market successful. Demand for diversified products has to be created even domestically. This can be a big boost for a plastic-free India as well,” he added.

Currently, 92 per cent of the total domestic jute produced is used for packaging purposes and just eight per cent is for other products, according to the Office of the Jute Commissioner.

Why, then, are jute mills not focusing on product diversification? JPMA ensures that the government purchases 70 per cent of the mills’ total production, Rishav Kajaria, deputy chairman, Indian Jute Mills Association (IJMA), said.

This should put the mills on a strong footing to capture diversified markets for the rest 30 per cent. However, only a handful of mills have the capacity to diversify.

Jute mills are marred by issues of machinery modernisation, mismanagement, labour shortage and unrest and dependence on the government. Industry experts Down To Earth spoke to said of the 70 mills in West Bengal, only around 60 are currently operating.

At least 10 mills closed down between October 2021 and May 2022, after a state government decision to cap pricing of raw jute on September 30, 2021. The decision was opposed by the industry and revoked on May 19 this year.

Experts also said the decision led to massive losses. The Union government capped the price at which the jute mills can purchase raw jute at Rs 6,500 per quintal (1 quintal equals 0.1 tonne) and it based its purchases of jute bags on this cap. But the actual price borne by mills to buy raw jute was Rs 7,000-7,200 per quintal.

Of the 10 mills that closed down, three have not managed to open again, rendering around 60,000 workers unemployed.

Kajaria also said one of the reasons the business had not been profitable was inadequate and arbitrary pricing of jute bags by the government. This pricing is fixed on a formula derived by the tariff commission, under the Union Ministry of Commerce and Industry.

Currently, the bags are priced on the basis of the provisional rates of 2016, which were meant to last for just six months, till the commission came out with a new report. The report was finally submitted to the Union Ministry of Textiles in April 2021 and is pending implementation.

In the meantime, IJMA has been in a tussle with the Union textile ministry, demanding revision of prices. At the current prices, according to the association, the industry is making a minimum loss of Rs 3,000 per tonne by supplying jute bags to the government.

“Raw jute prices are increasing but the costs have not been updated,” Kajaria said. “The industry is in survival mode right now. Some 70 per cent of my market is not paying me fairly. We do not have a strong balance sheet to think about innovation,” he added.

“There are very few mills that can take themselves out of a bad economic situation,” Amlesh Mishra, president of Loomtex Engineering Private Limited in North 24 Parganas, West Bengal, said. He has been working in the jute industry for the last 37 years.

Experts said of the functioning mills, only 8-10 are in good financial health and can survive seasonal losses. The business of another 20 mills is just average. The rest of the mills are financially unsound.

At the Baranagar Jute Mill in Kolkata, for instance, workers complain that the operations have significantly reduced in the past few years and so have the wages of the employees.

“I get work for hardly 12 days a month now,” Ashok Kumar Das, who has been working at the mill for the last 20 years, said. Sushil Jaiswal, leader of the jute workers’ trade union, who has also worked at the Baranagar mill in the past, alleged that it is being converted into a warehouse.

“The machines are being dismantled,” he said. DP Bhatter, an official at the mill, agreed that they were running at only 50 per cent capacity, but blamed the pricing cap for the situation.

But even the mills that are doing well are marred by problems. Samir Kumar Chanda, director of Hukumchand Jute Mill, said to be Asia’s largest jute mill, in North 24 Parganas, said they were at least 2,000 labourers short.

“It has become difficult to find workers ready to work in a jute mill.” The company has recently adopted a new policy, under which its human resources manager goes to nearby villages to look for people interested in working in a jute mill and make them aware of the incentives and wages the mill is giving.

All is not lost, Chanda said. “Jute has a bright future. We need to create a demand for diversified products and modernise,” he said.

For modernisation of the jute mills, the Union government is implementing the Incentive Scheme for Acquisition of Plant & Machinery, under which capital subsidy is being provided to replace the old machines.

However, mill officials said the subsidy had been stopped since last two years. Chakroborty confirmed that the scheme had been stopped, but only temporarily, since a new version of the scheme for the whole of textile industry was in the works.