Organic takeover: How 10,000 farmers of Telangana, Andhra are steering a silent movement

Catering directly to the consumers’ needs assures better marketability and incomes. This is what nearly 10,000 farmers of Telangana and Andhra Pradesh have realised over the past decade and are now steering a silent organic movement.

It all began in 2009, when a group of consumers in Hyderabad, then part of unified Andhra Pradesh, established a cooperative society to source chemical-free produce directly from farmers.

Operating under the guidance of the Centre for Sustainable Agriculture (CSA), a Hyderabad-based research non-profit, the cooperative society over a period of time roped in a few farmers and began to sell the produce through a farmer-run retail store in Secunderabad and mobile retail vans that travelled to urban areas.

Soon, more and more organic farmers joined the cooperative society and what had started off as a consumers’ initiative became a farmers’ group. In 2013, when the government floated the concept of farmer producer organisation (FPO) to aggregate collection of produce and create market links for better prices under the Companies Act of 2013, CSA and the cooperative society saw this as an opportunity.

Establishing an FPO also helps gain financial support from the government. Thus, in 2014, all the farmers’ groups under the cooperative society registered themselves as organic FPOs, and the society at the helm as Sahaja Aharam Producer Company Limited, a unique “federation” of organic FPOs.

That was the year when Telangana was carved out of Andhra Pradesh. But Sahaja Aharam continued its operation as a federation with FPOs from both the states. Today, as many as 23 organic FPOS with over 9,000 farmers across 180 villages are part the federation.

The groups are spread over the southern plateau and hills of Andhra Pradesh, as well as the north, central and southern parts of Telangana. The farmers grow paddy, cereals, oilseeds, pulses, fruits, vegetables and spices.

To obtain membership, FPOs buy equity in the federation. A board of five directors coordinates operations at the federation level along with the heads of the FPOs and support from CSA.

Since inception, Sahaja Aharam has realised that there is a growing market for organic produce that can help farmers earn more. So it provides marketing and retail support for certified organic produce. Some of its member-FPOs, though, market both conventional and organic produce.

The federation also encourages and helps farmers to obtain organic certification and trains them on cultivation of specific crops; weed, pest and disease management; and preparation of organic and biological inputs. Some farmers are also trained in poultry and livestock farming.

Venkat Reddy from Kallem village in Jangaon district, Telangana, who has converted 1.2 hectares (ha) of his 6.07 ha farm to organic, said, “There was an initial loss in paddy yield after the shift, but the cost has reduced from Rs 25,000 per 0.4 ha to Rs 15,000. Currently, I grow organic paddy for my own consumption. But after seeing other farmers get 10-15 per cent more income from this variety, I plan to bring in more area under it.”

Regenerative or chemical-free cultivation has helped improve the local environmental conditions as well. Enabavi village in Telangana’s Hanamkoda district, which declared itself as the first organic village in the region in 2006 is now entirely free of pesticides, fertilisers and genetically modified crops.

All 52 farmer families of the village have shifted 110 ha to regenerative agriculture by composting organic waste, using cow dung manure and pest-trapping crops and harvesting water. “This has led to a rise in soil fertility,” said GV Ramanjaneyulu, executive director of CSA.

With more farmers trying to benefit from regenerative agriculture, the federation is focused on helping its members gain a better market share. For this, it plans production strategies with its FPOs. It apprises them of trends in organic produce, sales figures and rates from the previous years.

“Sahaja Aharam buys my produce at 10-15 per cent higher price than the market,” said Vekanna Reddy, a farmer from Mulang village, Siddipet district, Telangana. The federation buys cereals, millets, pulses, vegetables and oilseeds at 10 per cent higher prices, which can increase based on quality. For paddy, rates can go higher. 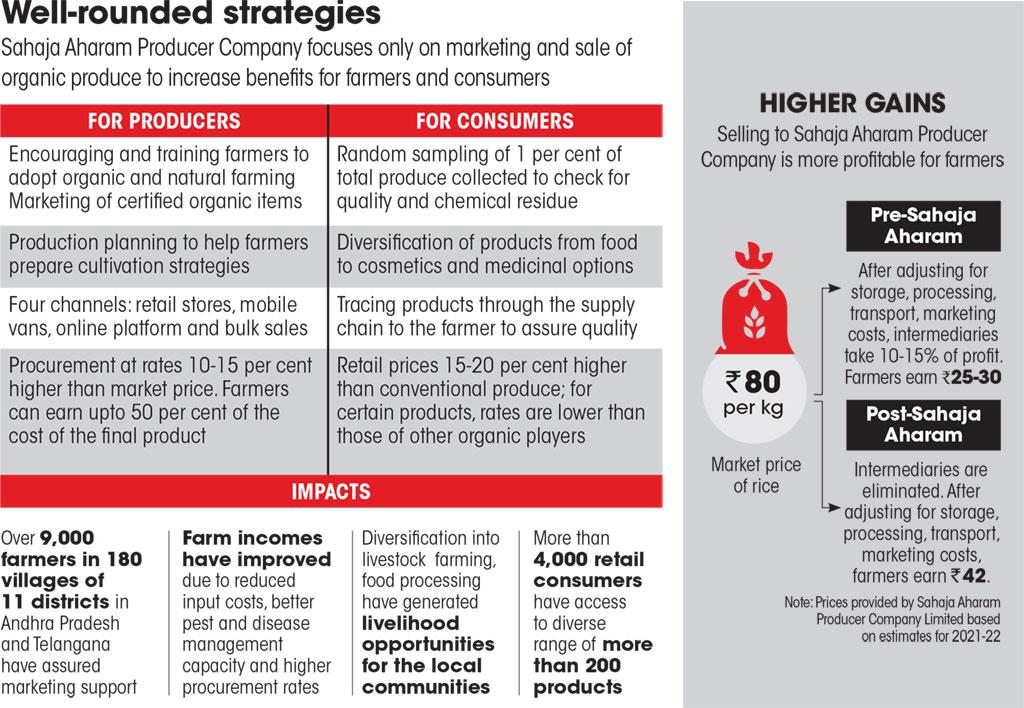 The federation sells raw and processed products, which include food items, cosmetics and other non-food products. Some 45 per cent of the product range consists of organic fruits and vegetables. To set market prices, Sahaja Aharam follows two criteria.

First, the farmers’ share in the price must either be 50 per cent over the cost of cultivation, 12-15 per cent above the local market or 50 per cent of the average price in the previous year, whichever is highest.

For instance, it procures paddy crop from farmers at Rs 42 per kg and sells it for Rs 80 — cultivators earn more than half the retail price. Farmers are paid in two tranches, once during procurement and then after sale of products.

Second, to remain competitive, prices fixed by the federation are merely 15-20 per cent higher than those for conventional produce, but lower in comparison to those of some other organic players, particularly for pulses, groundnut oil and spices. Some 15 per cent of the price funds the federation’s operations.

Sahaja Aharam also sells unlabelled produce in bulk to 110 aggregators. Currently, 55 per cent of sales are to bulk aggregators, 43 per cent through retail stores and 2 per cent online. Turnover has increased multifold over the last few years, from Rs 90.3 lakh 2018-19 to some Rs 2.61 crore in 2021-22.

“It has helped me re-learn sustainable farming techniques to increase yield. Earlier I used to earn Rs 29,600 per kg from paddy, now I earn Rs 33,000,” Krishan, a farmer from Jeedikal village in Jangaon district, who practices organic farming in his entire 2.8 ha, said. “I can save 50 per cent of cultivation costs, around Rs 10,000, by using organic inputs that I make,” he added.

Further, it has introduced a mobile application called Pestoscope and set up surveillance centres in villages, and shares weather predictions from the India Meteorological Department and states. Sahaja Aharam also introduced an enterprise resource planning tool in 2018, developed by CSA, to manage production, finances, warehousing, sales and data analysis.

To diversify incomes and provide more livelihood opportunities, the federation has set up “food hubs” at six districts in Andhra Pradesh and Telangana for storage and processing. It is also diversifying its product range to include ready-to-eat and non-food products.

The federation provides several lessons on hand-holding support, storage, processing and marketing, however, like other FPOs in the country, it faces challenges such as poor financial support and lack of skilled humanpower. Addressing these hurdles will help it grow better.