Next stop net zero: Indian Railways plans to become a net zero emitter by 2030; here’s how

Instead of going the usual offset route, the Indian Railways plans to source the bulk of its energy needs from renewable sources to become a net zero emitter 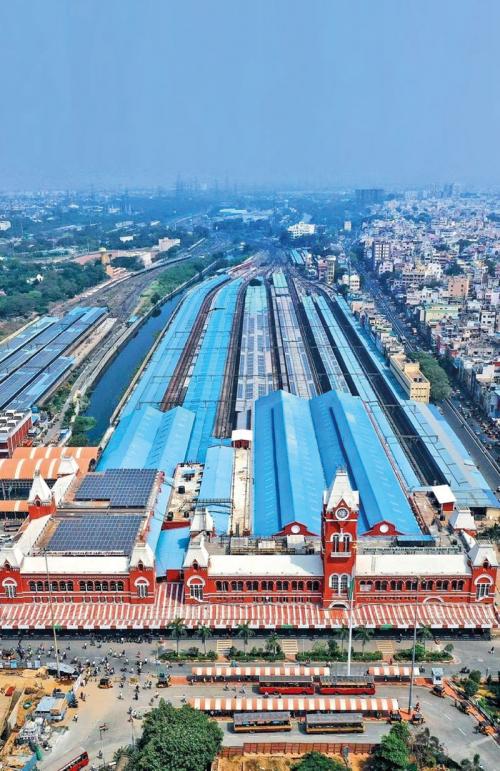 The Indian Railways — the world’s fourth-largest railway network — aims to become a net zero carbon emitter in the next seven years.

The Railways plans to achieve this ambitious target in two steps: A complete transition to electric trains by December 2023 and powering the trains and stations primarily through non-renewable sources by 2030.

If successful, the move will help India meet its nationally determined contribution of reducing its carbon emissions by 33 per cent by 2030, as transport is a key sector with substantial mitigation potential.

Most corporations trying to achieve this are focusing on carbon offsets, where they compensate for their emissions by carrying out green activities such as reforestation or land restoration drives.

The Indian Railways, in contrast, is primarily relying on reducing its emissions.

The Union Ministry of Railways announced its plan to go green way back in July 2020 and has since reiterated the goal several times.

The most recent announcement came on October 7, 2022, where it says the target will be achieved through “an integrated approach.”

It will, on the one hand, increase the share of railways in the movement of freight to 45 per cent by 2030, from the current 35 per cent. On the other hand, it will help the Railways build its renewable energy generation capacity.

The agency is also carrying out innovative solutions, such as investing in battery projects to ensure round-the-clock renewable supply, and installing solar panels along the railtracks for sustained generation.

Starting in 2014, the Railways picked up the pace to phase out diesel coaches and carry out the electrification of broad gauge railway tracks.

It plans to completely transition to an electrified rail network by December 2023.

Besides being clean, the phaseout of diesel coaches makes economic sense, as the country imports most of its fuel.

“Apart from this, the average speed of trains increases along the routes of electrification due to increased throughput, and there is development of industries, agro-based businesses, and progress of villagers and farmers along the electrified routes,” says the Mission 100% Electrification: Moving towards Net Zero Carbon Emission report released by the Union Ministry of Railways in February 2021.

As of July 2022, the share of diesel coaches for freight movement stood at 18.74 per cent and 21.7 per cent for passenger trains.

At the same time, a little less than 20 per cent of the railways’ broad gauge tracks remain non-electrified.

“We are confident about completing our goal in the next 14 months,” says a senior official with the Union Ministry of Railways, requesting anonymity. Once achieved, the transition will substantially increase the Railways' electricity consumption.

In 2019-20, it consumed 21 billion units of electricity. It is projected to see a threefold increase to 72 billion units by 2029-30. If the agency manages to shift to renewables by 2030, it will offset 60 million tonnes of carbon dioxide as compared to a business-as-usual scenario, says the July 2022 release.

By 2030, the total energy requirement of the Railways is expected to increase to 8,200 MW, or 8.2 GW. A small portion of the projected energy requirement — 700 MW or 8.5 per cent of the total energy demand — will still be sourced from non-renewable sources because of the current power purchase agreements with coal plants, says the official. The lion’s share — 91.5 per cent — will be met through renewable sources, he adds. 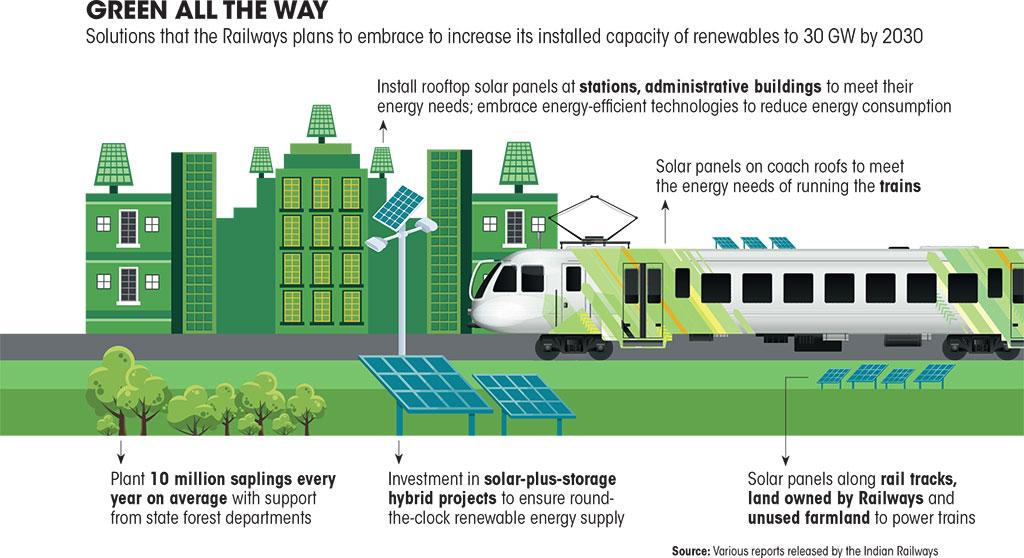 While the gap looks like a lot, it is achievable, says Vaibhav Chaturvedi, who leads the low-carbon pathways at Delhi-based non-profit Council on Energy, Environment, and Water.

“The Railways do not necessarily have to produce it themselves, they can draw from the grid or source it from third-party vendors,” he adds.

For now, the Railways plans to bridge the gap on its own. For this, it is undertaking several initiatives. It plans to install solar panels along the railway tracks, on top of the trains, stations and administrative buildings.

Till January 2021, over 1,000 stations and buildings had installed solar panels with a total capacity of 111 MW. The Railways is also setting up a solar-plus-storage hybrid pilot project at Dahod, Gujarat, that will ensure round-the-clock supply to the traction network.

It has entered into an agreement with the Solar Energy Corporation of India for a similar round-the-clock supply project at Rajnandgaon, Chhattisgarh. The Railways plans to replicate the model across the country.

It is also working on improving the energy efficiency of its stations and buildings. It has already made 700 stations compliant with ISO 14001, which deals with effective environmental management systems, and achieved green certifications for 31 railway buildings and 32 stations.

Starting from 2016-17, the Railways has started manufacturing only three-phase locomotives that generate electricity during braking (known as regenerative braking).

It has also carried out afforestation on vacant railway land and in between sections. Since 2017, the Railways has on average planted 10 million saplings a year, along with state forest departments, says the July release.

While the Railways is benefitting through the efficiency initiatives, it has to prioritise the transition from coal-based power to renewables.

A recent paper by Delhi-based consultancy firm Climate Trends warns that the phasing out of diesel engines will increase carbon dioxide emissions by 32 per cent due to the country’s reliance on coal to produce electricity.

“The transition is a major opportunity to solar developers and will attract investments to the tune of US $4-5 billion, but achieving the goal is going to be a tall order,” says Aarti Khosla, director of Climate Trends.

This was first published in the 16-30 November, 2022 edition of Down To Earth