A sour companion: The hog plum has much to offer, if people get past its strong taste

Hog plum is a great souring agent and can help in cancer, diabetes treatments 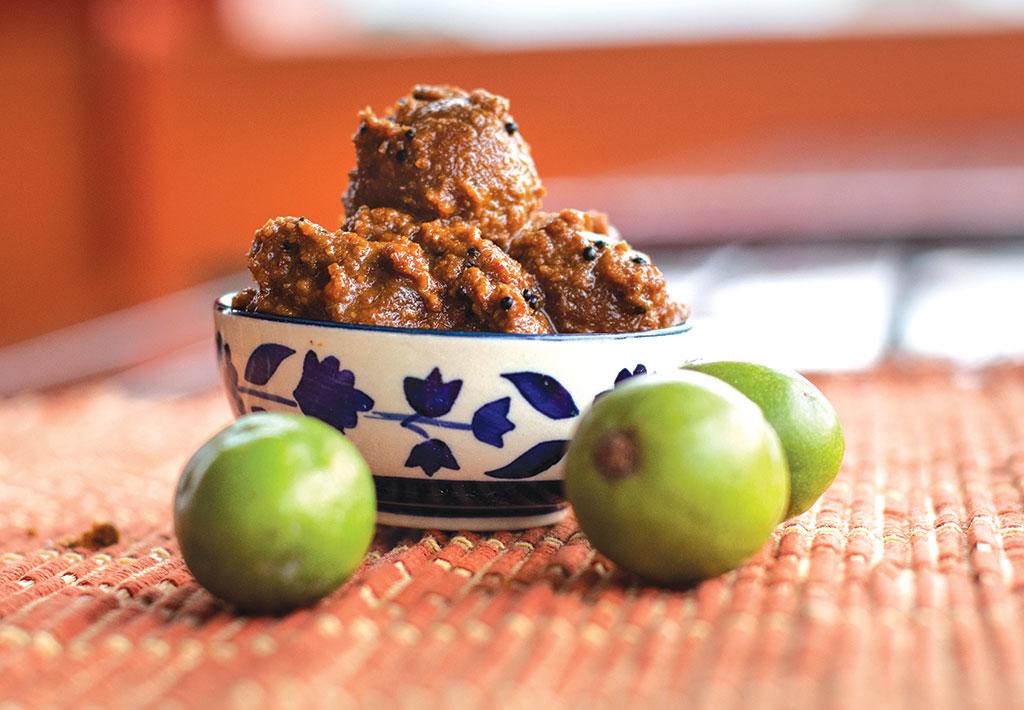 The hog plum or amra is used to prepare chutneys, pickles or as part of vegetarian and non-vegetarian dishes in different parts of India (Photograph: Vikas Choudhary)

At first glance, the hog plum looks like a green unripe mango. However, a closer look reveals that in fact, the small fruit has very little pulp and is more sour in taste than an unripe mango.

The hog plum, called ambara or amra in Hindi, is used as an important souring agent in several cuisines all across the country. For instance, in the Western Ghats, especially the Konkan area and Goa, the hog plum (called ambade or ambado in Konkani) iprovides a tangy taste to noth vegetarian and non-vegetarian dishes like khatkhate, a mixed vegetable stew. It is also used to make a sweet and sour chutney in Goa and in West Bengal. In Kerala, the fruit is used to make a pickle.

The science of why people consume sour food is not clear. According to one theory by US researchers in a review paper published in February 2022 in Proceedings of the Royal Society B: Biological Sciences, the receptors for sour taste developed in fish which then evolved into terrestrial organisms. These ancient fish would most likely have had the receptors all over their bodies to judge the pH of the water (sourness would indicate acidity) in which they were venturing.

Nowadays, however, people often have a mixed reaction to sour food and avoid consuming them. But just like sweets provide calories, salty foods help maintain fluid balance and umami foods provide savoury, meaty flavours that come with the consumption of proteins, sour food such as hog plum also has benefits.

The fruit is an important source of nutrients and even has medicinal properties. It is rich in phenolic compounds, natural antioxidants and minerals and has ascorbic acid, malic acid, calcium and phosphorus, according to a study by researchers from Delhi, published in the journal Food Research International in August 2011. The fruit not only aids digestion, but is also said to possess antidiabetic properties.

Recent studies have even flagged that the fruit could help in cancer treatment. Researchers from India and Vietnam used the fruit extract to prepare hematite (iron ore) nanoparticles which were found to be quite successful in controlling mammalian cancer cells in laboratory experiments.

Nanaoparticles per se are used to deliver medication to cancerous sites and lower the amount of drugs needed. Production of nanoparticles can be expensive, and the widely available hog plum could help lower the costs, the researchers say in a study published in Environmental Research in November last year.

Further, mucositis (inflammation of the mucous membranes in the digestive tract) is common in people receiving chemotherapy. Hog plum extract can be used to decrease the burden of this condition in people undergoing the treatment, researchers from Karnataka report in a July 2021 study in the journal Veterinary World.

This contradicts a common opinion that sour food causes inflammation. It is not just the fruit that has benefits. The bark extract of the hog plum tree can also protect against oxidative and inflammatory changes that occur in the body during mucositis.

Moreover, hog plum seeds contain compounds which help suppress parasites such as Plasmodium berghei, which causes malaria in certain rodents. But additional studies would be needed to isolate and identify these compounds as well as to understand the mechanism of inhibition, say researchers from Thailand in the journal BMC Complementary Medicine and Therapies in March 2022.

What is in the name?

Even as some benefits of the hog plum are known, the fruit has not been studied extensively. The hog plum is scientifically classified as a member of the Anacardiaceae family, sharing space with the cashewnut and mango. Its genus, Spondias, has a history of use going back at least as far as 6500 BC in the Tehuacán Valley of Mexico, but is not very well studied.

Some researchers consider the hog plum to be a separate species, Spondias pinnata, while others subsume it as a variety of Spondias dulcis, a similar fruit commonly called June plum, which is sweeter, bigger and fleshier.

The Spondias pinnata tree is deciduous and can reach a height of around 25 m. It is usually found in home gardens in tropical regions — it is not restricted to India and is common in countries like Malaysia, Indonesia and Bali, where it is part of traditional food and medicine.

In Bali, the leaves are used to prevent and treat diabetes hypoglycemic activity. When the leaf extract was evaluated on rats, it was found to be as effective in treatment as metformin, a commonly used diabetes medicine, as per a study by researchers from Nepal and Australia, published in the Scientific World Journal in June 2021.

Clearly, the sour hog plum has much to offer, if people get past the extremely sour taste.

This was first published in the 16-31 January, 2023 print edition of Down To Earth