Met officials claim accurate predictions of monsoon dates for eight years. Will they be able to do so this time?

The year 2012 was the eighth consecutive year when the forecast of monsoon dates for Kerala proved correct. Most of the long-range forecasts were also accurate, except for northeast India, claims the 2012 South West Monsoon End of Season Report by India Meteorological Department (IMD), New Delhi. 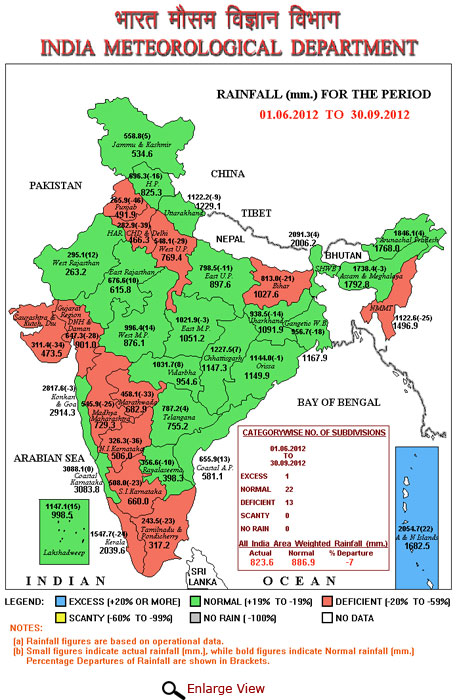 The Southwest monsoon current reached the Andaman Sea, the entry point of India, on May 23, three days after its normal date, and set in over Kerala on June 5—a delay by four days because of non-conductive conditions for the development of convection over the region. Monsoon covered the entire country by June 11, four days earlier than its normal date of July 15. But the monsoon stayed till late. It withdrew from western Rajasthan, the last point of the monsoon, on September 24 when the normal date of withdrawal is September 1.

The shifting of the east-west trough at sea level close to the foot hills of the Himalaya from June 25 till July 3 caused prolonged stagnation of the 'Northern Limit of Monsoon' and there was a hiatus for about 11 days from June 22 to July 2. During the period of hiatus, systems in westerlies caused rainfall over  northeast India and the feeble off-shore trough prevailing off the west coast brought rains along the west coast. Due to the sluggish advance, the southwest monsoon got delayed by nearly two weeks to reach the west-central India and parts of east Uttar Pradesh. Heat wave and severe heat wave conditions prevailed over the northern plains during this period. 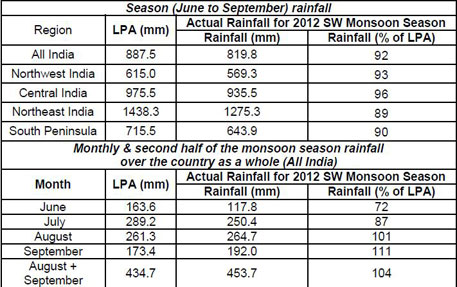 However, the forecast for July rainfall over the country as a whole was an overestimate and that for rainfall during the second half of the monsoon season was underestimated. Forecast for the three broad homogenous regions—Northwest India, Central India and the south peninsula—was also correct. However, it was slightly overestimated for northeast India. 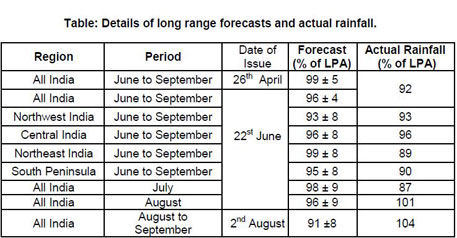 The report says the main reason for the error in estimation of the forecast for the second half of the monsoon season was delay in the establishment of El Nino conditions in the Pacific. It was also because of sudden emergence of positive phase of India Ocean Dipole (IOD) during the later part of the monsoon season. Both of these large-scale features may have contributed to increased rainfall activity particularly during the second half of the monsoon season. IOD, also known as the Indian Nino, is an irregular oscillation of sea-surface temperatures in which the western Indian Ocean becomes alternately warmer and then colder than the eastern part of the ocean.

Unlike 2002 and 2010, none of the 10 low pressure systems formed during the monsoon last year intensified into depressions. The normal frequency of monsoon depression per season is four to six. The first low pressure area of the season which formed over northeast Madhya Pradesh and adjoining southern Uttar Pradesh from July 7 to 11 facilitated the advance of the monsoon to cover the entire country. The second low pressure area formed over the Bay of Bengal from July 20-22 was short-lived. Moving in a northwesterly direction, it merged with the monsoon trough on July 23. Under the influence of five low pressure areas that formed during successive weeks of August, rainfall activity over the monsoon trough zone got enhanced. Towards the end of August, the systems and their remnants caused active to vigorous monsoon conditions over major parts of the country.
Incessant rainfall associated with the monsoon low pressure systems and active monsoon conditions caused flood situations in various states during different parts of the season, says the report.