A whiff of death 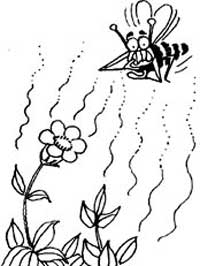 odours produced by plants can repel crop pests and invite insects' enemies. Researcher John Pickett of uk 's leading arable crop research centre at Rothamsted in Hertfordshire is developing perfumes that work as insecticides. Picketts' scents are produced by plants themselves to keep off unwanted pests ( New Scientist , Vol 151, No 2046).

Odours play a remarkable role in plant defence. Many plants respond to pest attacks by emitting scented ' sos signals' that ward off pests or attract those insects which prey on pests. Scientists are now trying to study the mechanism of the cocktail of odours used by plants, pests and their predators in nature. Such designer odours can be used against more than one species of pests and therefore, tend to be cheaper than the pheromones (sex hormones), which are species-specific odours.

The success of this research depends entirely on the decoding of the sense of smell in the insects and it has been found that the insects' olfactory mechanisms are based on the responses of highly specific cells. Among the pests that Picketts' group is working on are aphids, which pose a major threat to crops. These are known to have very specific and few olfactory nerve cells. But at the same time, aphids do not share the obsession for scents and since they even reproduce asexually, pheromones are of no use in controlling their population explosion.

Pickett and his colleagues are trying to make an attempt to create an odour shield by preparing a list of the aphids' olfactory cells. Microscopic electrodes are used to decode the aphids' olfaction and to record the activity of individual nerves in the insects' antennae in response to odours. Aphids, it turns out, respond to odours from other aphids, food plants and from plants they do not eat. This has made protection of vulnerable crops from aphids possible by means of alteration in the crops' odour.

Picketts' group is also testing how well these scents can mask the smell of crops growing in the field. They found that methyl salicylate, which is produced by beans, repel bean aphids. The odour also repels aphids from cereal crops. Scents can also attract predators that eat pests.

Dicke and his team investigated the response of several plant species to attacks from pests. Plants respond to this by releasing a blend of volatile chemicals which can repel pests and, in many cases, attract their predators. Dicke and his colleagues dubbed this as ' sos signal'. This is the best weapon a plant can have when attacked. But now with the advancements in biotechnology, crops are losing their ability to call for help. For instance, the modern varieties of rose have large showy flowers but very little scent. Genetic engineering and hybridisation techniques can come to rescue by producing varieties with strong sos signals.