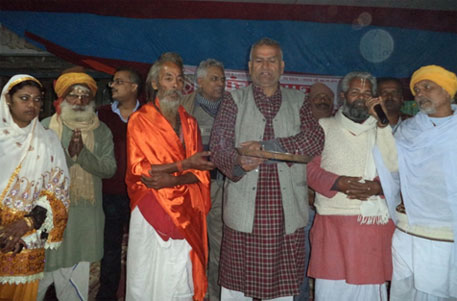 Activist Shashi Shekhar from Bihar has decided to go on a two-day jal satyagraha, starting Tuesday, in a bid to revive the near-dead Lakhandei river in Sitamarhi district. Shekhar will stand in the waters of the river near Lakshmana Ghat all day and night during the two days of the satyagraha.

He had gone on an indefinite hunger strike in December 2013 to highlight the change in the course of the Lakhandei river and the construction of embankments. He broke his fast after the state government assured him of action.

Shekhar tells Down To Earth that the state government has not done enough to revive the river. “The government ended my fast last year by giving false assurance,” he says.

According to Shekhar, the Lakhandei has shifted westward in the past decade. “The river has now completely merged with Jamura river. This has led to the problem of flooding in the villages on the banks of the Jamura,” he says. On the other hand, farmers who received water from the Lakhandei before it shifted course have now been left high and dry.

He demands that the old course of the Lakhandei river must be restored by digging a trench of 900 metres. “It will also solve the problem of drought in Sitamarhi district and flood in Darbhanga district,” he adds.