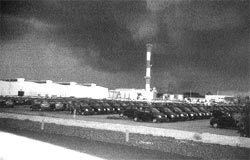 The board has pointed out that the level of lead, phosphate and nickel discharged from the plant exceeds the prescribed limit. The company has also been asked to use lead-free paints. Apart from this, hmil has been directed to install a pollution control device for volatile organic compounds (vocs) in its additional paint pool. tnpcb has rapped hmil for incinerating the spent lubricating oil and paint sludge because burning oil and paint emit toxic hydrocarbons like dioxin. "Pollution levels have increased further after the introduction of the new car, Sonata, by hmil," alleges Sheela Rani Chunkath, chairperson of tnpcb.

Responding to the allegations, a senior official of the company claimed that no norms had been violated. On the charge of the increased level of lead discharged from the plant, the official replied, "We do not use lead in our paint. It is only used in the electro deposition process."

Significantly, almost a year ago the Centre for Science and Environment's (cse) Green Rating Project (grp), which assesses corporate environmental performance within a specific sector, had advised the automaker to review its air pollution control systems. "We found that the company had not planned its air pollution control strategy properly," says Chandra Bhushan, coordinator, grp. He reveals that the project had criticised the company's policy of incinerating the paint sludge and lubricating oil. hmil had also been strongly urged to install control equipments for its incinerator and to commence monitoring emissions.

"It is indeed discouraging to note that our advice was not taken seriously by Hyundai. Today, it is being questioned on those very issues by the pollution control board, for which we had given them the recommendations 18 months ago," says Bhushan adding: "We had also suggested that the company replace heavy metals from its surface coating operations."

When queried about hmil not following the grp recommendations, the official skirted the issue saying that the company was working on them.