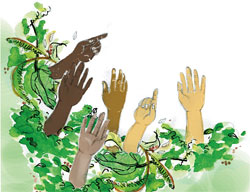 THE NEXT time labourers in Chhattisgarh working for projects under the Compensatory Afforestation Management and Planning Authority, or CAMPA, get paid, their wages will not be deposited in a bank account. They will be paid in cash. This July 26 order of the state forest department violates a Supreme Court order. The court order says all funds under CAMPA should be utilised as per the National Rural Employment Guarantee Act (NREGA) guidelines. Under NREGA, payments can be made only through bank accounts. This is to avoid misuse of funds.

Not satisfied with the way CAMPA projects were being carried out in the state, Chief Minister Raman Singh called a review meeting in June. During the meeting, foresters cited delay caused in labour payments through banks as the reason for the unsatisfactory work. The minister then directed the forest department to make the payments in cash. In the past two years, Chhattisgarh has received more than Rs 257 crore for CAMPA projects.

The authority, under the Union ministry of environment and forests, carries out afforestation and forest conservation works in lieu of the loss of forests in developmental projects.

Every year 10 per cent of the amount accumulated under CAMPA is released to state CAMPAs, formed after a 2009 order by the Supreme Court. At present, more than Rs 15,000 crore is accumulated at the Centre.

Activists feel such a change will encourage corruption.

Labourers in rural areas are illiterate. If their wages are paid through banks the entire amount must reach the accounts, says Gautam Bandopadhyay of non-profit Nadi Ghati Morcha. “In cash payments, there is a lot of scope for the money to reach the forest staff’s pocket,” he adds. 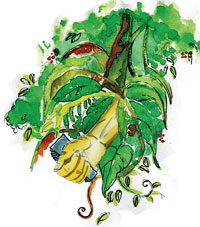 An artificial pressure was created to review the mechanism of payment through bank accounts, alleges Bandopadhyay. “The government could not spend the money because there were no realistic plans for projects under CAMPA. It was not because the payments were made through bank accounts,” he says. The amount is so huge that everybody can expect a windfall from cash payments, he adds.

According to an estimate, around Rs 50 lakh to one crore is sanctioned annually for labour payments under CAMPA for each forest division in Chhattisgarh. Dheerendra Sharma, principal chief conservator of forests, however, says the main reason for allowing cash payments is to ensure labour availability. “The bank and post-office network is very poor in the interior forested areas of the state. Account payment becomes so difficult that labourers get disinterested in work,” says Sharma.

The Supreme Court’s order on following NREGA guidelines while spending CAMPA funds in July 2009 was reiterated in the third meeting of the National CAMPA Advisory Council in June last year.