Next round of meeting on December 9, a day after proposed all-India shutdown 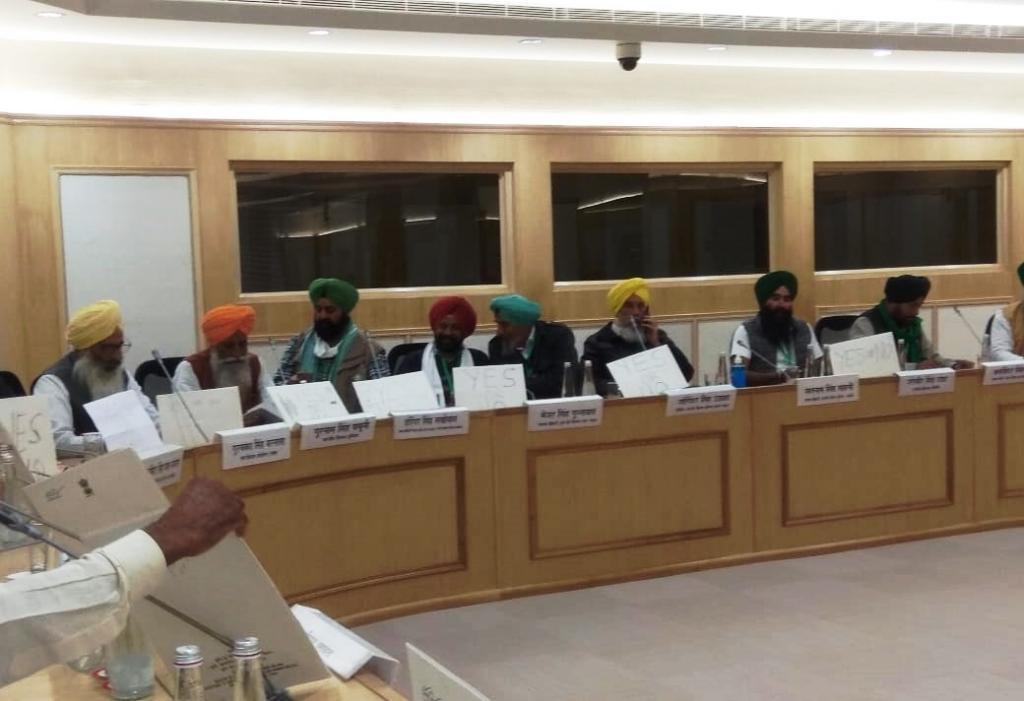 Farmer leaders, during the fifth round of talks with the Centre, went on a short silent break; they wanted the the Union government to respond in ‘yes’ or ‘no’ to their demands of complete repeal of the three farm laws.

The fifth round of talks December 5, 2020 between the Union government and farmer unions on the three contentious farm laws at Vigyan Bhawan, Delhi, failed to make any breakthrough once again as both sides stuck to their positions.

The next meeting has been proposed for December 9, a day after the call for a ‘Bharat Bandh’ (all-India shutdown).

Union agriculture minister Narendra Singh Tomar, in the five-hour long meeting, reiterated that the government was in favour of making amendments in the laws. The farmer unions, however, stuck on their stand that they would want nothing short of the repeal of the three laws. They said they weren’t consulted in the first place when the laws were passed in September.

Following this, the government side said it needed more time. December 9, then, was decided as the date for the next meeting.

“The government will prepare a draft and give it to us. They said they will consult the states too. Discussions were held on minimum support price as well, but we said that we should also take up laws and talk about their rollback. Bharat Bandh (on December 8) will go on as announced,” said Rakesh Tikait from Bharatiya Kisan Union (BKU).

Farmer leaders during the meeting also went on a short silent break; they wanted the the Union government to respond in ‘yes’ or ‘no’ to their demands.

The government had identified seven-eight points in the last round of meeting December 3. Discussions were held on the same but the meeting remained inconclusive.

The farmer unions also told the government that they were prepared for the long haul and have the material to last a year. They said they had “no problem staying on the roads”.

“We won’t take the path of non-violence. The Intelligence Bureau will tell you what we’re doing at the protest site. We do not want corporate farming. The government will benefit from this law, not the farmer,” ANI quoted the farmer unions as saying during the meeting.

Tomar told reporters after the meeting, said the government once again mentioned that MSP would continue. But if the farmers were not convinced, “we would find solutions for it”.

“The discussion happened in a cordial atmosphere. The Union government is also ready to strengthen the agricultural produce market committees. We said we will think on all aspects and look for a solution. But it would be helpful if we get some suggestions from the farmers on how to do that,” he said.

Like the previous round of talks, farmers made arrangements for their own food this time as well.

Tomar urged elderly people and children to return home in view of their health as temperatures were dipping in the national capital.

At Singhu border, where tens of thousands of farmers have been camping, singer and actor Diljit Singh Dosanjh addressed the protesting farmers. “We have only one request to the Centre. Please fulfil the demands of our farmers. Everyone is sitting here peacefully and the entire country is with them,” he said.