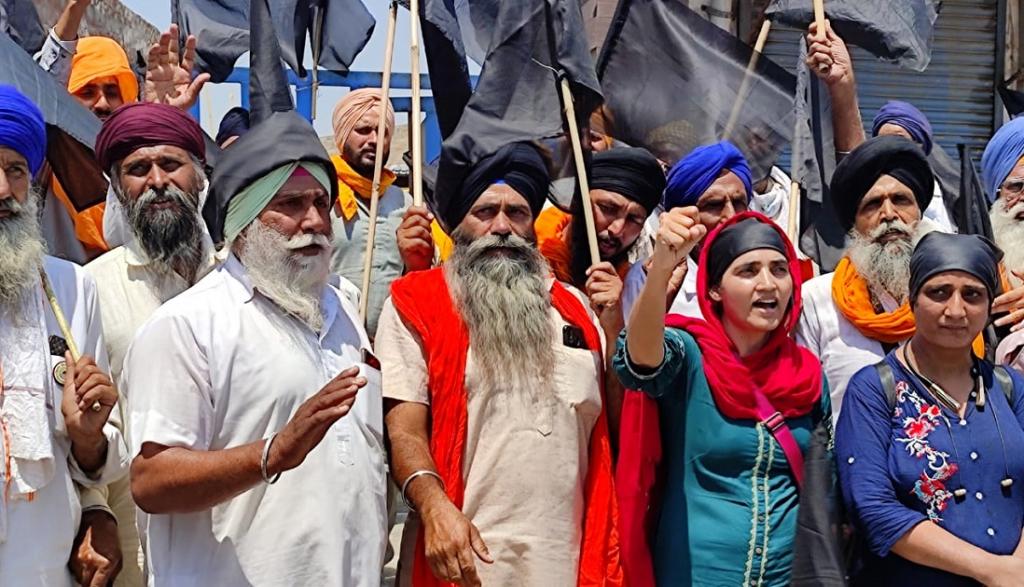 Farmers at Singhu observed a Black Day May 26 as their protests completed half a year. Photo: Samyukt Kisan Morcha

The protest by farmers on the borders of Delhi against the three agricultural laws — Farmers Produce Trade and Commerce (Promotion and Facilitation) Act, 2020; Farmers (Empowerment and Protection Agreement on Price Assurance and Farm Services Act, 2020 and the Essential Commodities (Amendment) Act, 2020 — completed six months May 26, 2021.

Farmers across the protest sites hoisted black flags atop their houses, shops, offices, tractors, cars, jeeps, scooters, motorcycles, buses and trucks to mark it as a ‘Black Day’ for India. This was in accordance with a call given by the Samyukt Kisan Morcha (SKM), a joint front of farmer unions spearheading the protest.

The agitation began in November last year. It saw thousands of farmers marching towards Delhi and camping at its Singhu and Tikri border posts November 26, 2020. This happened after meetings with the Union agriculture ministry regarding the farmers’ concerns on the laws did not result in anything concrete.

The movement has faced several hardships and challenges in the last six months: Farmers braving winter cold and summer heat and meticulously planning the Rabi harvest and post-harvest operations despite the ongoing protest, criticism for the Republic Day tractor rally turning violent and for gathering in large numbers amid the novel coronavirus disease (COVID-19) pandemic and even the deaths of 470 farmers, either by suicide or other reasons.

The SKM said May 26 the repeated attempts of the Bharatiya Janata Party (BJP) government(s) to portray the movement as violent had failed repeatedly. Farmers had only strengthened themselves with peace and non-violence throughout the struggle, it added.

Last week, leaders of 12 opposition parties, including the Congress, the Trinamool Congress, the Dravida Munnetra Kazhagam, the Nationalist Congress Party and the Samajwadi Party had extended their support to the farmers’ call for a country-wide protest May 26.

The SKM also called the seven-year rule of the BJP at the Centre since 2014 the most “anti-farmer”:

It has also been the most anti-farmer rule in the country so far, from May 26, 2014, when the BJP formed a government at the Centre. From the time Narendra Modi became the Prime Minister, multiple anti-farmer measures have been adopted over seven long years.

Whether it was the dilution of the Land Acquisition Act 2013 or the failure to provide minimum support price (MSP) or even decent hikes in MSP announcements, the Modi government had amply proven itself to be anti-farmer.

This was also reflected in its policies like demonetisation or failure to protect farmers from natural disasters in the age of climate change or the current egotistic attitude towards the ongoing farmers’ struggle, the SKM said.

The farmers vowed to continue the protest “for however” long it took.

“The Government of India can choose to remain unwise in stretching this longer without resolving the demands of the farmers. But this would be at its own loss and at the expense of BJP’s supporter base,” the SKM said.