Andhra farmers turn masons, milkmen despite state getting ‘decent’ rain; here is why 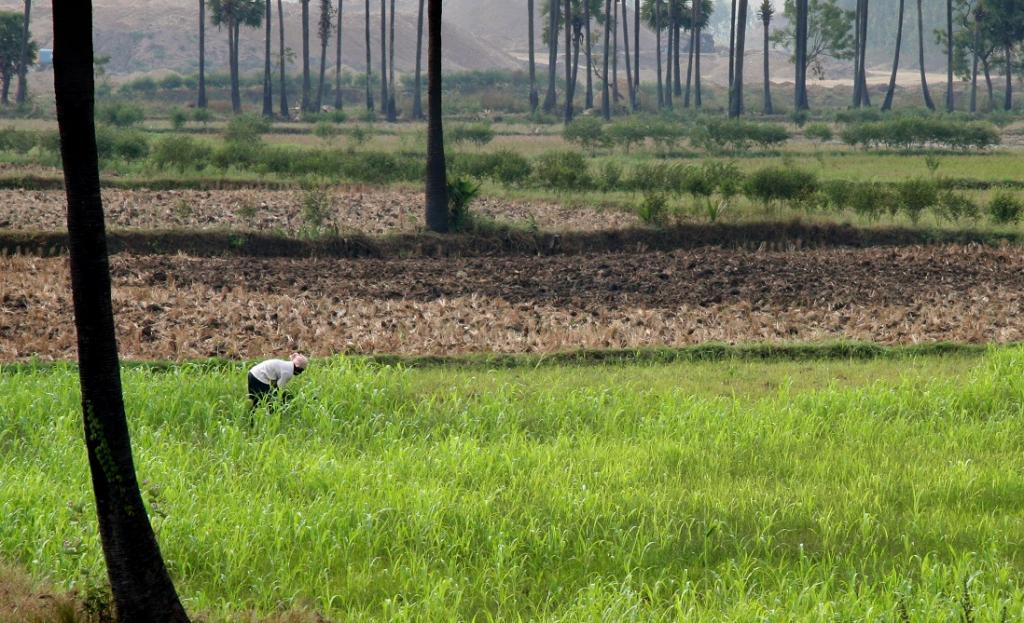 A farmer works his fields in Andhra Pradesh. Photo: iStock

Andhra Pradesh has received around 20 per cent more rainfall than is normal for this time of the year, according to the state weather department. The state’s reservoirs have enough water now. However, kharif crop coverage in the state is down, according to government data. Worse, farmers are refusing to cultivate and are considering other vocations.

The weekly kharif crop coverage report released by the Commissionerate of Agriculture showed that crops like paddy, sorghum, fox-tailed millet, red gram, green gram, black gram and chilli peppers are down 25 per cent.

Farmers across the state told this reporter that the lack of remunerative prices, rising input costs as well as accumulating debt was making them disenchanted with agriculture.

A prominent agricultural expert noted that farmers had been suffering ever since united Andhra Pradesh was bifurcated in the last decade. The main reason, he said, was faulty government policies.

R Mallikarjuna Reddy from Gopulapuram revenue village in the Duvvuru mandal (headed by a tehsildar) of YSR Kadapa district, has left farming, having lost hope.

“I sold 1.21 hectares of my land to pay debts over the last three years and have Rs five lakhs in debt still. I am not willing to take up paddy cultivation again even on a tenancy basis and have become a mason now in the near-by Proddatur town,” he told this reporter.

Gopulapuram is irrigated by the KC canal and gets assured water for one crop from the Srisailam dam around August.

Mallikarjuna’s fellow villager M Pratap Reddy incurred a Rs 60 lakh debt in farming. He said, “The endowment land of seven acres I used to cultivate for Rs 1 lakh tenancy has now been taken for Rs 46,000 per year. I now hear tenant farmers asking for investment from land owners to take up farming.”

C Varadarajulu Reddy, another farmer who sold 0.6 hectacres of his land and used to cultivate 16.2 hectares of leased land, has pinned hope on dairy farming.

He said he might take up cultivation only on his left-over land of 2.42 hectares to get fodder for dairy cattle.

Tenancy in AP is the highest in the country and is pegged at 42.4 per cent according the 77th Round Survey of the National Sample Survey Office (NSSO), 2019. Sustaining viability of farming for tenant farmers against this backdrop attains added significance in the state.

Other farmers have not changed vocations. But, they have changed crops.

S Fakruddin, a farmer from Kadivella village of Yemmiganur mandal in Kurnool district has taken up cotton cultivation, given the minimum guarantee it gives over other crops.

B Suresh Babu, a farmer from Kanumuru village, in Pamarru mandal of Krishna district, who claimed he had cultivated 28-32 hectares (Eight hectares of his own and the rest leased land) for the last 40 years, had now restricted himself to his own land.

“The cost of labour has shot up from a third of the input cost to 50 per cent now. But the labour is also not happy as prices of all commodities have risen.

“Recently, we had tenant farmers from the adjacent NTR district, who cultivated chillies, come as labourers to pay the lease amount to land owners. Major chilli-growing areas had lost the crop to thrips, an invasive species of pest,” he added.

Investment for even vegetable crops like cucumber, ridge gourd and bottle gourd has become more now as they too have been hit by diseases, the farmer added.

The farmers are not mulling a crop holiday like their counterparts in the Konaseema district.

M Satyanarayana, a farmer from Pedamuttevi village of Mouvva mandal in Krishna district owns 0.8 hectares and has taken 3.23 hectares on tenancy, said:

There is no crop holiday here. While the governments gloat over giving us Rs 13,500 for a year I lost nearly Rs one lakh as I received only Rs 1,250 per 75 kg paddy bag while the minimum support price is Rs 1,550.

Seed and fertiliser dealers in the Sodam mandal of Chittoor district rue the lack of sales. When the price of tomatoes increased to Rs 70 a kg in March and April this year, the government intervened to provide relief to consumers.

It is turning a blind eye when tomatoes sell at Rs 7 per kg, they say. In such a situation, how will farmers take up cultivation, they ask.

GV Ramanjaneyulu, executive director, Centre for Sustainable Agriculture based in Hyderabad blamed the situation on the policies adopted by successive state governments.

“This is courtesy falling investment of governments in agriculture to improve productivity. This is happening since the division of the state.

“Successive governments have not made much difference in improving overall agriculture. This calls for a significant shift in the agricultural policy support to the farmers,” he added.

The state weather department has characterised the southwest monsoon in AP as ‘normal’.

Of the 26 districts in the state, East Godavari and West Godavari metrological sub divisions received an excess rain of 62 and 52 per cent respectively.

Stella, the director of the India Metrological Department of AP, told this reporter that a departure of minus 19 to plus 19 per cent from normal rainfall was usually considered normal.

“The damage to crops cannot be deduced depending on just the rains. Additional factors like flood water from upper riparian states could also affect.

“Low-lying areas could be affected more. So, the minus 14 per cent rain in Vishakhapatnam and minus four percent rain in Kurnool are considered normal,” she said.