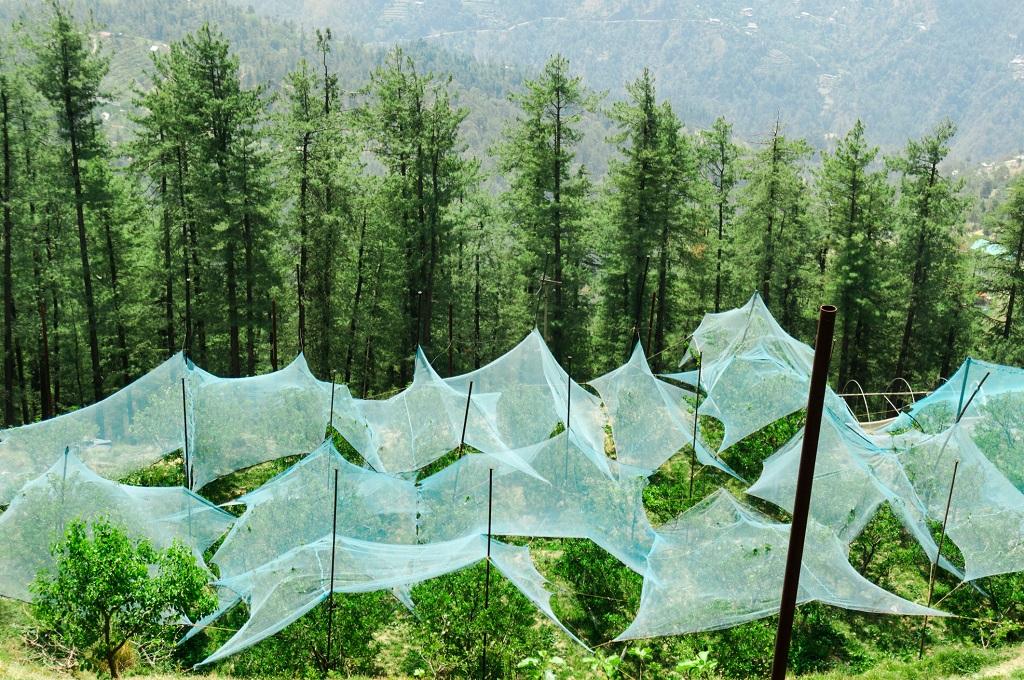 The apple line, which refers to the traditional apple growing areas in the Indian Himalayan Region, has been shifting to higher altitudes as temperature rises. Now it seems the apple line is also coming down with farmers at lower altitudes beginning to grow varieties of apple that do not require much chilling.

The changing pattern of rainfall and increase in average maximum and minimum temperature has caused significant fluctuation in crop production with traditional temperate fruit belt moving upwards.  Adverse climatic factors during winters such as winter warming have affected flowering and fruit development stages, which turn, is resulting in reduced apple productivity in Himachal Pradesh.

“We often hear of the apple line shifting to higher and higher altitudes in the Himalayas, but we can also see now that apples are being grown at lower altitudes where they were never grown before. This is becoming possible with new technology and adaptive capacity of mountain farmers,” said Dr Tej Partap, vice chancellor of G B Pant University of Agriculture and Technology, while addressing a symposium on ‘climate change and future of agriculture’ organized by Dialogue Highway here.

In addition to climate change, technology and globalization had emerged as new drivers of change in the mountains, he said. “Farmers sitting in the Himalayas are now exposed to the rest of the world through the internet and many of them are proactively adopting new technologies like protected cultivation and are taking to mountain crops that can be marketed globally,” Dr Partap added.

Explaining the change taking place in horticulture practices in the hills, Dr Satish K Bhardwaj of Yashwant Parmar University of Horticulture and Forestry, said drought stress in apple growing areas was resulting in decreased fruit size. The rise in temperature and moisture stress are leading to more incidences of sun burn and cracking in apples, affecting its quality.

Due to increased temperature and early melting of snow in dry temperate regions in Himachal Pradesh over the past two decades, apple cultivation has shifted to higher reaches of Kinnaur, mostly to areas at altitude between 2200 to 2500 meters above the sea level. “The optimum temperature for fruit blossoming and setting for apple crops is 22 to 24 degrees while the region is experiencing temperatures up to 26 degrees for up to a fortnight,” he said.

Harish Chauhan, an apple grower from Thanedar area in Upper Shimla, said while low-chill varieties of apple were being grown by some farmers, they do not fetch a good price in the market because of inferior fruit quality. “The Indian market is being flooded with imported apples from New Zealand, China, Iran and even Chile,” he said.

While traditional apple-growing belts are seeing a churn, climate change has also opened up new opportunities for high hill farmers, experts said. The driver of this change is the fact that the number of ‘Growing Degree Days’ – which implies days suitable for plant growth - are increasing in the region.  This is beneficial for introduction of new crops in the hills.

“Farmers will have to exploit agro-climatic situations in niche areas to grow specific crops. Agro-climatic conditions in the state vary every 15 to 20 km. Suitable cultivar of a crop should be grown in most suitable situation. For instance, in frost-prone areas, fruits like pomegranate, persimmon, pecan nut, low chilling cultivars of peaches and plums are being grown,” said Dr Som Dev Sharma of College of Horticulture and Forestry, Hamirpur.

In subtropical low hill region farmers in order to save their livelihoods are opting for protected cultivation of vegetables and flowers in a big way. (India Science Wire)