From seed banks to rainwater harvesting, one village on the Brahmaputra has spread innovative agriculture through the region – as farmers battle against worsening floods and droughts

Harendra Neog is considered one of the most innovative farmers in his village. Credit: Azera Parveen Rahman

Harendra Neog, a farmer in India’s northeast state of Assam, recounts how his family would bathe their cattle in ponds every Bohaag Bihu, the celebration of the Assamese New Year. It is a tradition in which everyone participates in outside their homes. “But this time in April during Bihu the ponds were almost dry,” he said.

Traditionally, farmers in Assam practise mono-cropping, which means they grow a single crop on their land every year – usually rice.

Harendra Neog was no exception. “In 2010, the Joha [variety of] rice I grew on three bigha (about 4,000 square metres) of land suffered a lot as a result of no rain. There were cracks on the earth…we see floods, but a drought-like scene? Never before,” he said.

Once the dry weather abated, Neog, known locally as one of the more enterprising farmers, decided to grow maize. It was a bumper production, he said, but with little thought about the market demand, he again suffered losses.

Around this time, Neog’s village, Chamua, in Assam’s Lakhimpur district, was chosen as a model village under the National Initiative on Climate Resilient Agriculture’s (NICRA) as part of the All India Coordinated Research Project for Dryland Agriculture (AICRPDA). The project began in 2010 to deal with the projected problems faced by agriculture due to climate change, the foremost being a decline in yield. This decline has a direct impact on the ability of the poor to achieve financial independence, as well as for India to remain food secure. A 100 villages were chosen where researchers would support farmers in the village introduce climate change resilient farming practices, which could then be adopted in other villages if they proved successful.

The first change farmers in 62 households made was to diversify crops and introduce multi-cropping. They were also told about the how long different varieties of rice took to mature in order to better plan crop patterns.

“Until that meeting we had a very vague idea about how many days a particular rice variety takes to mature and its yield,” said Moniprobha Neog, a woman farmer of the village. “This helped us go for the short-duration, high-yield varieties.” The villagers were also given different varieties of seeds.

Harendra Neog, for instance, agreed to try the deshang rice variety—its maturity duration was 105 days (a short duration) and it gave a good yield. After this harvest, he tried growing potatoes. “Potatoes takes 90-100 days to mature, and I got 30 quintals (3,000 kilogrammes) from 1 bigha (1,337 square metres) land,” he said, which was a very good yield. After potatoes, he sowed vegetable seeds that grow in the Rabi season (during the monsoon). In all, Neog grew 22 varieties of crops in a year, bringing  rich dividends.

“With crop diversification farmers not only reduce their chances of losses due to climatic aberrations, but also increase their profit margin,” said Pallab Kumar Sarma, chief scientist, AICRPDA, at the Biswanath College of Agriculture. If rice fails because of a late monsoon, a farmer can make up for it with other crops, Sarma explained.

Average temperatures in Assam have increased by 0.01 degree Celsius per year between 1951 and 2010, and annual rainfall has decreased by 2.96 mm per year, according to data from the India Meteorological Department (IMD). 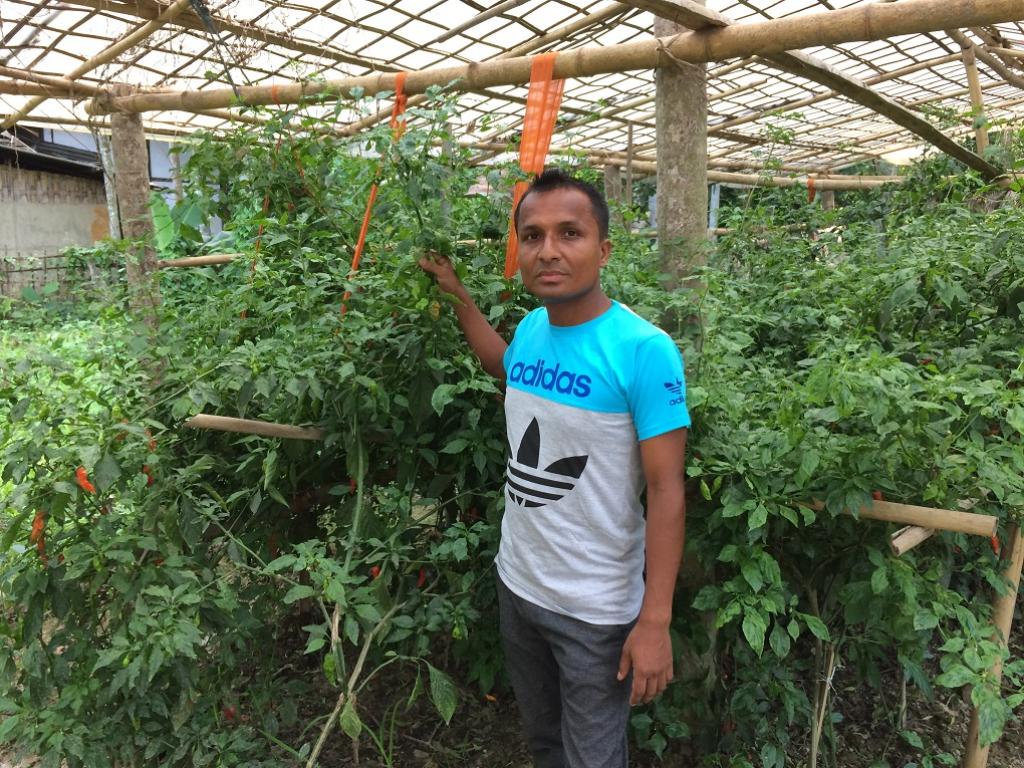 Introducing low cost poly houses to protect vegetables, such as chillies, brinjal (aubergines), and tomatoes, is another intervention that has worked well for farmers. Jadhav Dutta, a farmer from the village of Dholpur—notorious for frequent flash floods— grew Bhoot Jolokia or ghost peppers, in a poly house for the first time last year. Ghost peppers are considered the world’s hottest chilli, and are indigenous to Assam. He was elated at the results. “I earned more than INR 30,000 [USD 439] from my chillies, and this year I am expecting around INR 80,000 [USD 1,169],” he said, pointing at his healthy crop in the front yard of his house.

Unlike Neog, Dutta does not have the option of trying different rice varieties because his village faces floods, which come three to four times a year, or sometimes as much as 15 times a year. The only rice variety that can be successfully grown in this environment is the traditional Bao variety. “It takes a long time — six months to mature — but it adapts to the rising water level by elongating its stalk. And even though its yield is low (2.5 tonne per bigha), it’s assured and we can use the stalks as fodder for our livestock,” he said.

In the face of recurring and devastating floods that often destroy crops during the monsoon, developing seed banks and introducing the concept of a community nursery has also provided much relief for farmers in Neog’s village. A chart in the community office listing out the variety of rice seeds each farmer has, helps famers to share varieties and recuperate from losses caused by erratic weather.

“Rainwater harvesting during the monsoon is another important initiative of this project, and under this we have renovated 13 farm ponds which have proved crucial for irrigation of crops during the dry spells,” Sarma added. 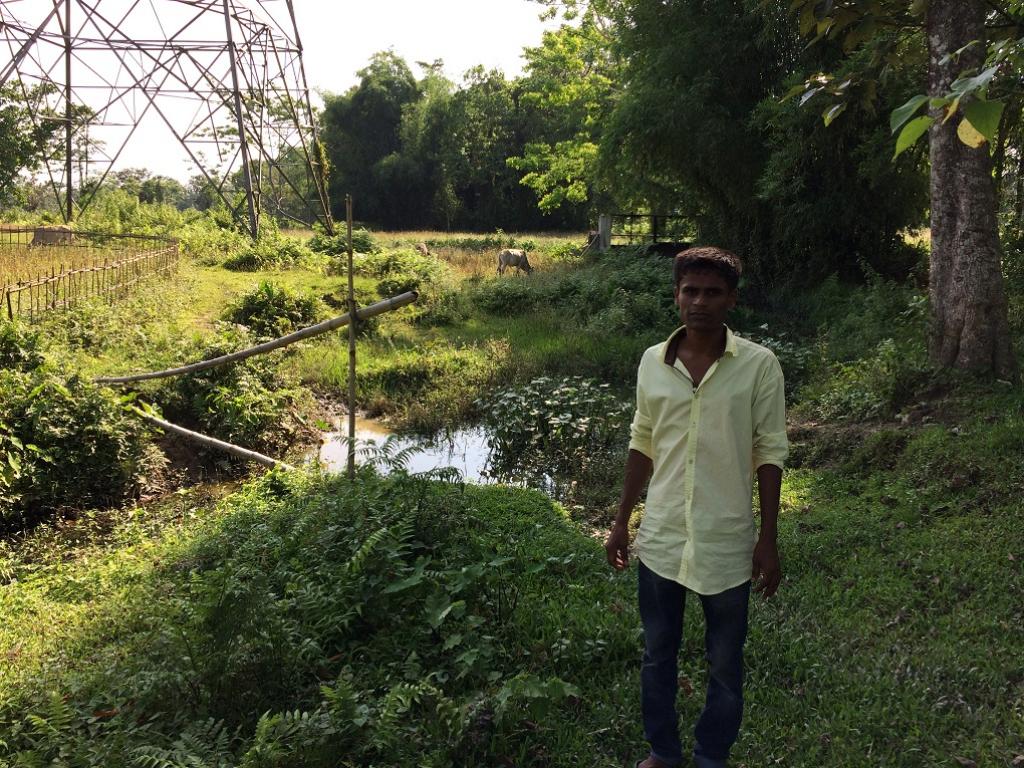 This has helped farmers ensure good crop yields through the dry season. Ranjan Hazarika, another farmer, said that he and four other farmers who grow potatoes on a small plot of land have benefitted a lot from rainwater harvesting.

“The average household income of my village has increased 10 times since we have adopted these interventions,” Neog said, sitting in his newly-constructed, four-room, concrete house. Back in 2010 he had a mud house with a thatch roof. Success inspires further success, and women of the village have also started sowing traditional rice varieties that are used to make Assamese sweetmeats and selling these products in the local markets.

After witnessing the success in Chamua village, people from surrounding villages have also started adopting the interventions in their own farming practices. “They also borrow rice seeds from us…we are all growing them together,” Neog said.

Azera Parveen Rahman is a freelance journalist from Asssam. This story is published as part of the IHCAP-CMS Media Fellowship Programme