Back to basics: COVID-19 labour crunch brings direct seeding of paddy in focus

States have been trying to promote DSR for some time; it is gaining traction now — Since June, when kharif sowing started, 0.7 million ha has been covered in Punjab 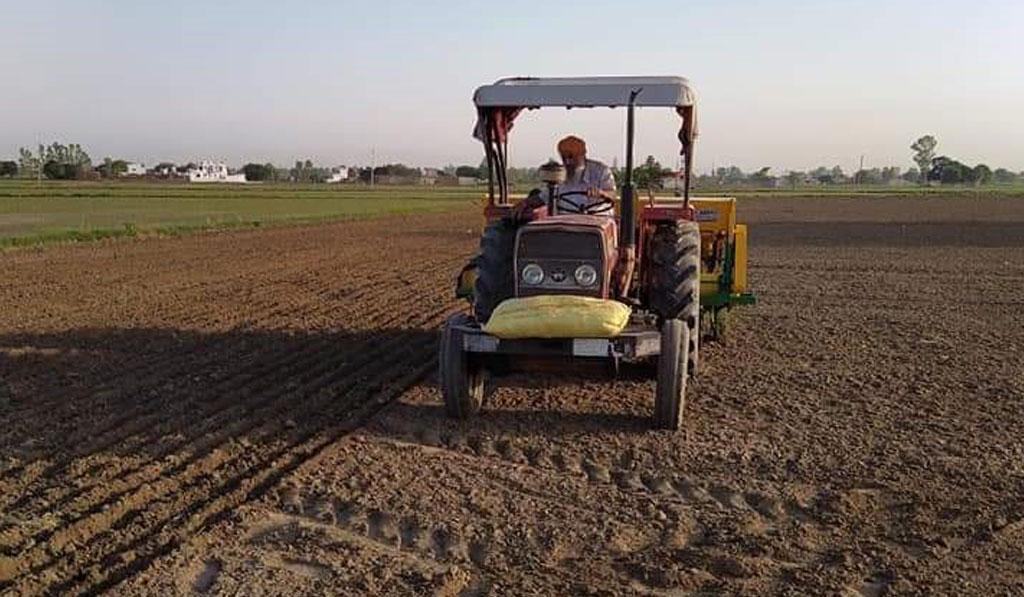 While other farmers of his village wondered how to overcome the labour shortage caused by migration of workers during the novel coronavirus disease (COVID-19) lockdown, Kewal Singh was without a worry. The 55-year-old farmer from Kothe Amberhar village of Punjab’s Ferozepur district did not need to hire labourers to sow rice. He had been doing it himself for the past five years with minimal help.

It was in 2015 that Singh experimented with direct-seeded rice (DSR), also called broadcasting seed technique, an alternative way of sowing rice. The traditional and the prevalent way across India is transplanting rice (TPR) seedlings from a nursery to waterlogged fields. But TPR is extremely labour- and water-intensive, unlike DSR.

Inspired by a fellow farmer of his village, Kewal shifted part of his 16 hectare (ha) farmland to DSR in the first year. The yield increased and the input cost reduced by Rs 7,000 per ha. He kept bringing more land under DSR every year and this year, when the labour shortage was extreme, he used DSR on his entire farmland.

There is no nationwide official data on how much rice in India is grown through DSR. M L Jat, principal scientist with Mexico-based CIMMYT (International Maize and Wheat Improvement Centre), estimated that about 10 per cent of India’s 44 million ha under rice cultivation is through DSR.

In the past few decades, many state governments have been encouraging farmers to move to DSR because it is easier on the environment, but without much success. Most recently, the Punjab government, on April 16, 2020, issued a statement citing a Punjab Agricultural University (PAU) study asking farmers to shift to DSR.

Since June, when kharif sowing started, 0.7 million ha has been brought under DSR in Punjab, said the state government, according to media reports.The government did not try hard enough to popularise DSR all these years. But COVID-19 has done the trick,” said BS Rajewal, president of Bharatiya Kisan Union’s Rajewal faction in Punjab.

A study by the Indian Council of Agricultural Research and Indian Institute of Rice Research in 2016-17 stated that DSR is gaining popularity among the farmers of Raichur, Koppal and Ballari districts in Karnataka where water shortage is acute.

Globally, around 23 per cent rice was directly seeded in 2007, according to the study ‘Weed Management in Direct Seeded Rice’, published in Advances in Agronomy in 2011.

Countries have been gradually shifting to DSR. In south Asia and southeast Asia, which produce, supply and consume a large proportion of the global rice, the shift to DSR started in the late 1980s and 1990s, mainly in growing economies such as Malaysia and Thailand as well as in countries where rapid intensification of rice production took place, for example Vietnam, said the study.

China shifted to DSR in the 1980s, Korea in 1991, and experiments on direct seeding in Bangladesh started in the 2000s. Much of the shift was due to rising wages and labour shortages.

Ever since rice cultivation started, farmers across the world followed the practice of broadcasting seeds directly on dry or puddled soils, said Jat. The shift to TPR happened only in the past century primarily for two reasons— seed rate and weeds.

“The seed rate was high, with farmers using 100 kg seed per ha under DSR while transplanting rice needed just 15 to 10 kg per ha. Another major factor was the emergence of weeds and the lack of effective weedicides,” explained Jat.

In transplanting, since the field is waterlogged, weed growth is minimal. Even in India, the practice of transplanting started only after the Green Revolution. “All the rice grown in the country a hundred years ago was through DSR,” said Jat.

When Punjab and Haryana shifted from their traditional crops (maize, millet, pulses and oilseeds) to the wheat-paddy cultivation cycle, the change in cropping pattern was to ensure food security for the country and, therefore, neither the Centre nor the states showed concern for the sustainability of the resources.

“Rice comes from wild plant species and its cultivation was adopted in naturally flooded areas. So when farmers adopted it in non-naturally flooded areas, they flooded the fields themselves,” said Surinder Singh Kukal, dean, College of Agriculture, PAU, explaining how TPR became prevalent even in regions that are not rich in water resources.

Rice is the major kharif crop of India and is grown in all the major agrarian states, such as Punjab, Haryana, Uttar Pradesh and Bihar. Since groundwater is the main source of irrigation in these states, rice cultivation by TPR has depleted the water table.

In Punjab, for instance, the groundwater declined in about 85 per cent of the state between 1984 and 2016, according to Central Ground Water Board data. In such a scenario, DSR can help reduce water consumption by as much as 35 per cent, according to the 2011 study in Advances in Agronomy.

The study was an analysis of 77 published studies from across the globe. It also stated that DSR can reduce labour needs by 60 per cent and the cost of production by $30-51 per ha. The transplanting technique is also a major source of methane, a greenhouse gas.

The study found that methane emissions were reduced by 6 per cent to 92 per cent in the DSR method, depending on the type of variant used. There are DSR variants that can be practised as per the agro-climatic and soil conditions.

The two main methods are — dry DSR (in which rice seeds are sown by drilling in dry soil) and wet DSR (in which sprouted seeds are sown in wet soil). PAU, which first recommended DSR in 2010, has now suggested a few refinements and called it tar wattar (optimum moisture) DSR.

Since groundwater is the main source of irrigation in Punjab, rice cultivation by transplantation has depleted the water table.

This is a modification of wet DSR. In tar wattar DSR, the field is laser-levelled and a pre-sowing (rauni) irrigation is done. The field is prepared to optimum soil moisture condition and rice is seeded immediately. Herbicides to control weeds are sprayed simultaneously with the help of drill machine. The first irrigation is done 21 days after sowing, which is a major departure from the DSR being tried earlier in Punjab.

“The delay in first irrigation promotes deep root penetration and minimises nutrient deficiencies. The three-week post-sowing period covers most of the driest month of June in which no irrigation is done and hence water is saved,” said MS Bhullar, principal agronomist, PAU.

PAU’s recommendation for DSR in 2010 was only for medium to heavy textured soils, but demonstrations last year showed the refined DSR technology can work even in sandy loam soils.

This has increased the area suitable for DSR in Punjab from 45 per cent to 85 per cent. However, there are a few drawbacks with DSR. Rain immediately after seeding can reduce availability of soil nutrients and damage the crop.

“Germination stopped on at least 30 per cent of my field after the untimely rain on June 4,” said Gurbinder Singh Bajwa, a farmer from Punjab’s Gurdaspur district, who had sowed rice on 0.8 ha through DSR on June 2.

“A crust got formed and to break that I irrigated before the recommended 21 days. It didn’t work,” he added.

Jaskarana Singh Khosa, a farmer of Kothe Amberhar, planted rice through DSR in eight ha this time, but the crop was destroyed since the machine was faulty and the sowing was too deep. With DSR, farmers and researchers will also have to work on weed management.

“The intensity and diversity of weeds keep increasing. New weeds emerge; so it’s likely that the same medicine won’t work next time,” warned Kukal. Bhullar, however, was optimistic. “Next year will be better. It will take some time for farmers to fully adapt.”