Bhavantar Yojna: MP farmers refuse to sign up for 2nd round 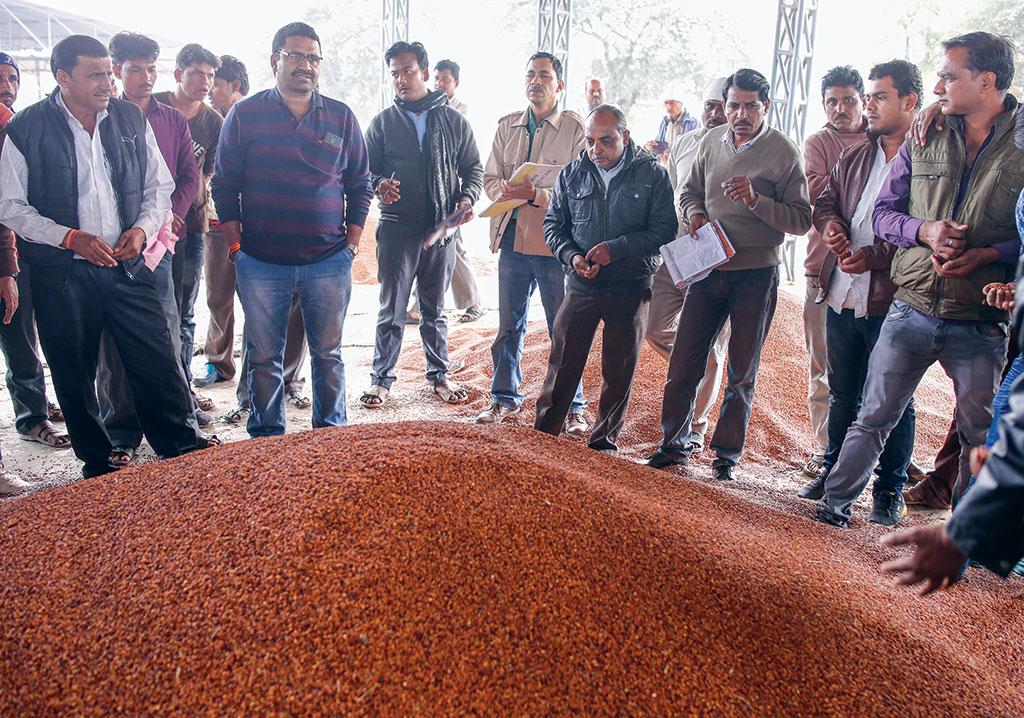 Bhavantar Bhugtan Yojana has resulted in a surge in supply of grains in mandis and a crash in prices (Photographs: Vikas Choudhary)

When Madhya Pradesh Chief Minister Shivraj Singh Chouhan announced Bhavantar Bhugtan Yojana (BBY) in August 2017 to compensate farmers for the losses they would suffer by selling their crops below the minimum support price (MSP) in the state’s 257 mandis, the farmers welcomed the scheme with open arms. About 2 million of Madhya Pradesh’s 9.8 million farmers registered for BBY between September 11, 2017, and November 25,2017, the government-designated registration window for seven major kharif crops—soyabean, urad (black gram), maize, moong (green gram), til (sesame), ramtil (niger seed) and groundnut.

But their enthusiasm is on the wane now. Most of the over 200 farmers Down To Earth (DTE) talked to in six villages of Hoshangabad and Sehore districts, the maximum soyabean and urad-producing districts of the state, said they would not register for the scheme for the rabi season. Why?

The scheme looks impressive on the face of it, but the fine print paints a different picture, say farmers, because the government has brought in another variable—a modal rate—for five of the seven crops (see ‘Wrong move’). The rate is decided taking into account the prices at which the crop was sold on any given day in Madhya Pradesh and in mandis of two other top states in terms of the volume of that crop produced. For example, if soyabean was sold at Rs X in Madhya Pradesh and Rs Y and Rs Z respectively in Maharashtra and Rajasthan, the modal rate for that day would be the average of X, Y and Z. It should be noted that the government uses modal price only when it is less than MSP. The modal prices for til and ramtil were not released because they exceeded the crops’ MSP.

A visit to mandis confirmed that most sales happened below the modal rates. Pankaj Chandravanshi, a trader in Rehti mandi, says the highest price at which he bought soyabean from farmers in October was Rs 24,800 per tonne when the modal price was Rs 25,800. The trend continued in November and December, he adds.

“It is an open violation of Section 35 of the Madhya Pradesh Krishi Upaj Mandi Adhiniyam, 1972, which says no agriculture produce can be sold below the support price declared by the state government,” says Kakkaji Sharma, president of Rashtriya Kisan Majdoor Sangh. He has moved the Madhya Pradesh high court on this issue.

The highest number of farmers who registered for BBY were soyabean cultivators (about 1 million), followed by urad (0.6 million), maize, groundnut and moong. “Madhya Pradesh will pay farmers over Rs 1,727 crore under BBY for kharif crops. But the bulk of this amount, over Rs 1,567 crore, will be used on farmers who are being paid on the basis of modal price. Only about Rs 159 crore will be on the basis of MSP,” says a senior Madhya Pradesh government official, requesting anonymity.

Devinder Sharma, a Punjab-based agriculture policy expert, says that the concept of modal price is flawed. “The government is ensuring that the farmer is kept away from the minimum support price. The Haryana government blindly implemented a similar scheme and the NITI Aayog is also pushing for it without knowing ground realities. It is a scheme to benefit traders who ensure they crash prices by cartelisation during the BBY sale window.”

There is another reason farmers are livid. “The scheme caused distress selling,” says Mahind Patel of Hamidganj. “If a soyabean farmer had registered under the scheme, he could sell the produce between October 16 to December 31. Such windows were fixed for all the kharif crops. So all the farmers had to dump their produce collectively in the mandis at the same time. As a result, the supply surpassed demand several times over and the trading rates plummeted,” he explains. “Before the BBY period, soyabean was sold at Rs 30,000 per tonne in the mandi, but during the scheme it sold at Rs 22,000-24,000. In fact, after the scheme period the rates shot up to Rs 40,000,” he says.

When DTE asked farmers that they had the option of not selling during that BBY period, Bir Singh of Rohna replied, “We can’t afford to wait for the scheme period to end because what we get from selling the kharif crop, we invest in rabi. Its sowing time is crucial and has almost arrived.”

The farmers are so aggrieved by distress selling that many want the government to withdraw the scheme. “The prices fell beyond our fears this year,” says Ram Bharosh Yadav of Borkheda village, Hoshangabad. Principal secretary of agriculture Rajesh Rajora claims that the prices fell because the quality of crops was bad. He also says that when prices fell in Madhya Pradesh, they did so in others states too, and therefore BBY cannot be blamed for the crash. But data on agmarketnet.gov.in, a Union government portal, tells a different story. Of the seven states whose prices were available on the portal, the rate of urad was the lowest in Madhya Pradesh (Rs 29,100 per tonne) in November and December. Same was the case with maize, which, at Rs 10,300 per tonne, was the lowest in the 18 states whose prices were available. In soyabean, Madhya Pradesh was seventh of 10 states. Farmers are also worried that the prices may crash again for the rabi crops. But Rajora says that the sale window for the rabi crop will be longer. The dates are yet to be announced.

Another issue highlighted by the farmers is the cap imposed by the government on the amount of produce it will compensate for under BBY. For instance, the government will pay the price difference for only 1,412 kg per hectare of the soyabean crop to a farmer in Harda district. If his produce is more than that, it will not come under the purview of BBY. Such district-wise limits have been fixed for all crops under the scheme. Dharm S Meena of Hoshangabad’s Baikhedi village says, “The distress selling has already crashed the prices. On top of this, the government will not pay the price difference for the rest of the crop. It is a double whammy for us.” 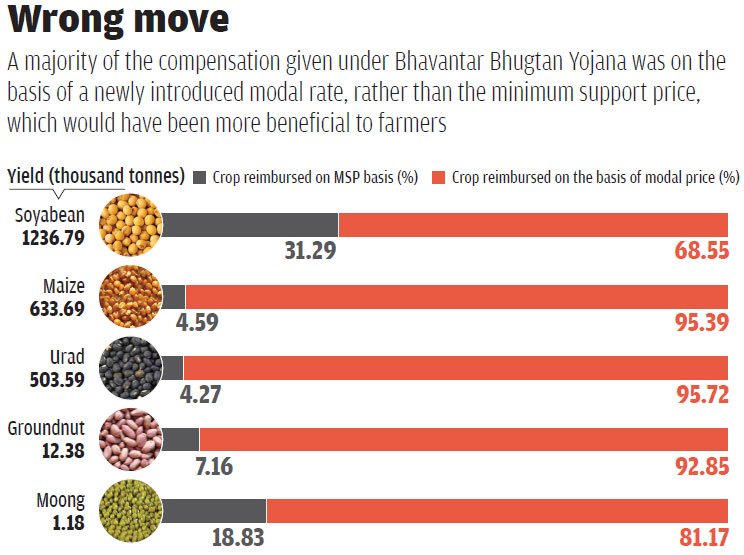 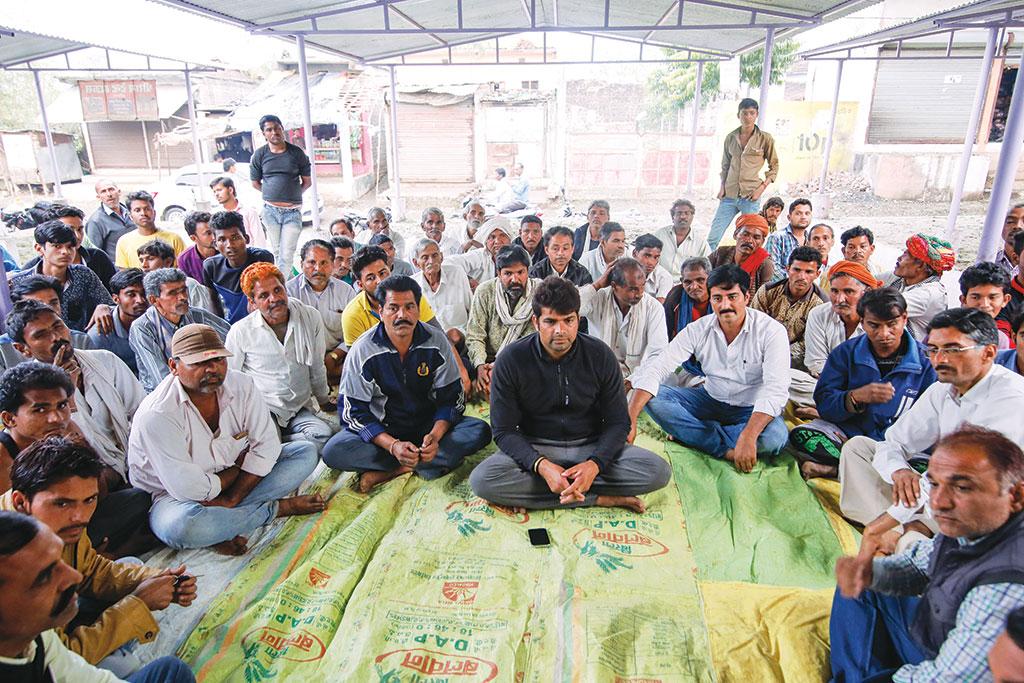 Avinash Parjai, a farmer of Rohna village, sold his 0.5 tonnes of urad in the Itarsi mandi in November but says he has not received a penny till date. “I don’t know how much money I will get or by when,” he says.

Once a farmer registers for the scheme on the government’s online portal and links his bank account, mobile number and Aadhaar number to it, the government is supposed to transfer the due amount to the bank account after compiling the sale data from the mandis. The Madhya Pradesh State Civil Supplies Corporation has been tasked with updating farmers on the compensation via SMS. But none of the farmers DTE talked to reported receiving any message. “We have been doing rounds of banks, but even officials there have started shouting at us,” says Bhagwat Singh, a farmer of Hoshangabad district, who sold 0.7 tonne of soyabean in January.

“There is no deadline for farmers to get the compensation. But irrespective of when the sale takes place, the farmer should get the money by the 25th of the next month,” says Faiz Ahmad Kidwai, managing director of the Madhya Pradesh Mandi Board.

Farmers have also been demanding that all crops be brought under BBY. But Rajora says that no government has the wherewithal to do so. In fact, he says that he has proposed the government not to bring those farmers under the BBY ambit who have sold crops at less than 50 per cent of MSP. “If your quality is so poor, why should the state government compensate you? We don’t want to promote bad quality farming,” Rajora lists as one of the learnings from the first phase of BBY. If the state cabinet accepts the proposal, it will only add to farmers’ distress.