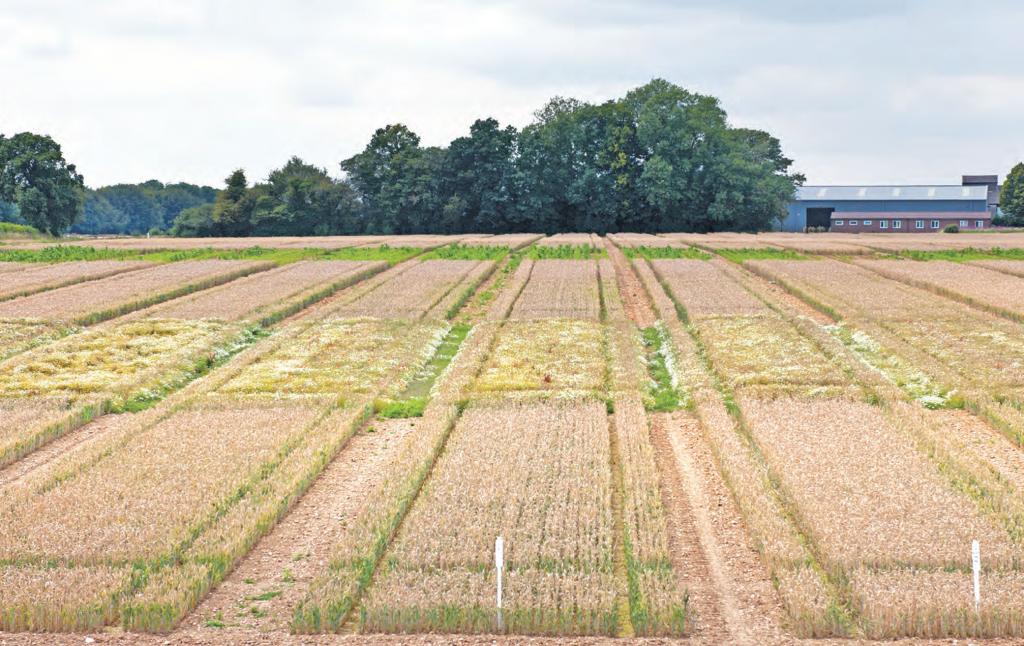 Scientists have been sowing wheat on this field, named Broadbalk, every year since 1843 to understand how to use fertilisers to improve crop yield (Photographs Courtesy: Rothamsted Research Institution)

The farmland in the picture might look unremarkable to most. But for agricultural scientists, it is part the planet’s most famous 4.5 hectares (ha). The field in Hertfordshire county of southern England has been under continuous scientific experiments for the past 178 years, making it the world’s oldest and longest running study.

The research was started by agricultural scientist John Bennet Lawes and chemist Joseph Henry Gilbert under the Rothamsted Research institution in the autumn of 1843, when the first crop of wheat was sown on a field named Broadbalk.

Every year since then, researchers from the institute have sown winter wheat on all or some parts of the field to compare crop yields, when grown using inorganic fertilisers with those when grown using organic or farmyard manure (FYM). A patch that receives no fertiliser or manure inputs is also maintained for control treatment.

The aim of the Broadbalk experiment is to test the effects of different organic and inorganic fertilisers on soil fertility and study the optimum nutrition requirements to improve crop yield. The research took shape by growing the same crop each year on the same land, a practice considered bad farming in the 19th century; Lawes and Gilbert had realised this was the best way to learn about the individual crop nutrient requirements.

And stage was set

Under Broadbalk experiment, the land was divided into 19 strips of wheat field, each 300 metres long and 6 m wide. To test the benefits of different combinations, some strips received inorganic fertilisers, some organic and some others a combination of both. One strip was left received neither of these. Modifications were made over the years.

Wheat was grown continuously till 1968, when the strips were further divided into sections, with 10 of them growing the crop in rotation after a twoyear break. On six sections, wheat was grown in two different threecourse rotations with oats and beans.

In 1978, one of the six sections reverted to continuous wheat; potatoes, oats, maize and beans were grown under a five-course rotation with wheat on the remaining five sections.

These experiments were not envisioned to be long-term initially, but Lawes and Gilbert later thought more useful information could be gained by continuing them over many growing seasons. And they were not wrong.

After 175 years of study, the scientists have come up with some interesting observations. They have found that yields from the section where wheat was grown with a two-year break, were higher (2 tonnes per ha) than from sections where wheat was grown continuously. The effects of soil-borne pests and diseases are minimised in case the field gets a two-year break, they said.

Between 1950 and 2019, the average yield with fertilisers was 4.9 tonnes per ha, while the average for fym was 4.8 tonnes. But research showed that the use of organic manure had increased the soil organic matter content on some plots.

“It also had beneficial effects on many soil properties, including fertility, structure and water holding capacity. This can make the soil more easily workable and decrease the energy required to plough it. It may also improve soil conditions for plant establishment and growth,” said Andy Macdonald, manager of Rothamsted Research’s long-term experiments. 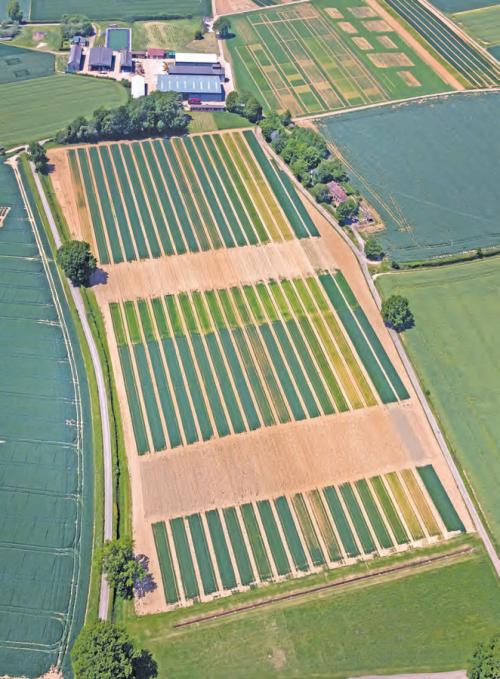 However the Broadbalk experiment indicates such benefits may not require large increase in soil organic matter.

For instance, in temperate north-western European climates, modest applications of manure on a regular basis (once during crop rotation) may be sufficient to improve the health of soil, Macdonald added.

A comparison of recent yield between 2016 and 2018 of both continuous and rotational wheat plots shows that the higher the amount of nitrogen, the greater is the yield.

The highest average yield was was in wheat treated with N6 fertiliser, grown in both continuous and rotational manner.

Although the difference in yield between wheat treated with fym and N6 was not much in continuous plots, in the rotational plots, the average yield from FYM was 6.9 tonnes per ha against 10.7 tonnes per ha from N6.

The finding shows that there is little benefit for farmers using fertiliser with such high levels of nitrogen. Also, since most of the nitrogen gets converted to nitrate, any residue not retained in soil may convert to nitrous oxide, a greenhouse gas that leaks when water drains through the soil.

Another significant finding of the ongoing experiment is about organic matter in the soil. A century after the experiments began, it was found that the amount of organic carbon (C) in topsoil (0-23 centimetres) in FYM-treated plots was more than double of that in fertiliser-treated plots.

Similarly, long-term changes in the total percentage of nitrogen concentration in the topsoil where winter wheat was grown in most years since 1843 were also tested.

The other aspect was the soil’s ability to act as a sink for methane (CH4). Preliminary findings showed less CH4 is oxidised in the soil when nitrogen was applied as against soil receiving FYM or that with neither fertiliser nor manure.

In 2000, another important change was to withhold the P fertiliser from selected plots. Doing this allowed plant-available phosphorus to decline to a level which is suitable to achieve maximum yield without any detrimental effect on the soil.

The research has also emphasised the importance of good weed control to protect the yield. One of the 10 sections (Section 8) was not given herbicides and its comparison with other plots that received the same fertiliser as well as herbicides, showed that the mean yields were lower in the former.

An assessment from 1985 to 2014 showed mean yield from section 8 was half of the yield from one another section.

With this knowledge, Rothamsted Research scientists have improved wheat yields from 1 tonne per ha since 1843 to 9 tonnes per ha in 2020, boosting Lawes’ statement in his first Rothamsted paper in 1847, where he described Broadbalk soil as a heavy loam resting upon chalk, capable of producing good wheat when well manured. 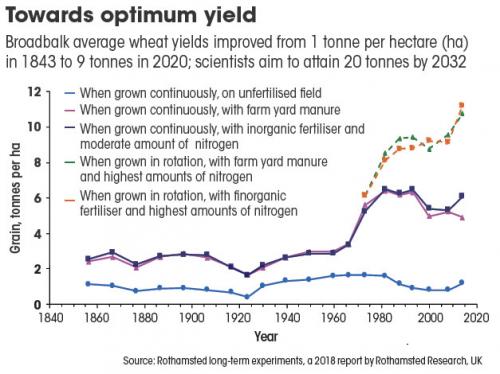 Calling Rothamsted the birth-place of systematic agricultural research, M L Jat, principal scientist with Mexico-based International Maize and Wheat Improvement Center, said: “We can learn a lot from these kinds of experiments where they have been trying to find a balance in the use of chemical fertilisers for 176 years. Long-term experiments are really needed when the world is talking about evidence-based agronomy. We need to learn from these instead of taking decisions, political or otherwise, based on one or two years of research.”

Such experiments help in devising long-term strategies by putting together data from past climatic conditions and understanding what can help build soil health.

India has also been conducting its own long-term experiments, especially related to fertiliser and nutrient management.

Long-term fertiliser experiments are being carried out at 17 Indian Council of Agricultural Research (ICAR) centres since 1970 to study changes in soil quality, crop productivity and sustainability.

According to ICAR, these experiments show that it is not possible to sustain productivity without external supply of nutrients. The research has led to the development of integrated plant nutrient supply and management strategies for improving soil fertility, enhancing and sustaining productivity of intensive cropping systems — rice-wheat, rice-rice, maize-wheat, finger millet-maize, soybean-wheat and groundnut-wheat — in major soil groups of India.

The results shows application of N alone has a detrimental effect on soil productivity, but a balanced use of NPK can help maintain organic carbon in soil. Jat says, experiments like these are assets to the nation. The database can help plan strategies, help policymakers understand what is happening in the field and serve as capacity development play-farms, generating scientific evidence.