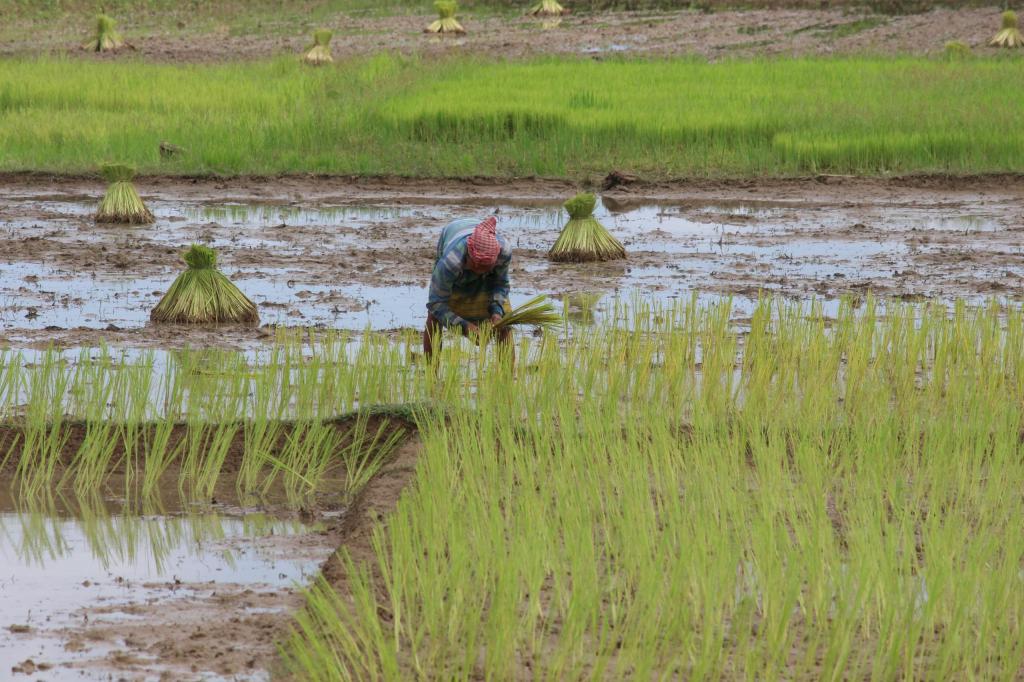 Climate change is real. Droughts in the rainy state of Assam are not unheard of anymore. Warmer temperatures have affected the state’s tea gardens for a decade. Now, places recently experiencing unexpected and longer dry spells are catching the eye.

“Never before have I seen drought in this region,” said Dipantor Soh, a 28-year-old farmer from Mirigaon, a village under the Sarupathar revenue circle. The Assam government had declared the revenue circles of Sarupathar and Golaghat drought-hit a week ago.

The farmers are left to fend for themselves for the state government does not provide any irrigation facility.

“I paid Rs 1,150 per bigha of the land for three hours,” Soh added. He owns seven bighas of land, and grows rice and tea there.

But his efforts could only do little. His farm production suffered. When asked about his estimated his crop yield, he put it at 50 per cent of what was expected. This translated to a monthly income of less than or equal to Rs 10,000.

Another villager from the Sarupathar revenue circle suffered a similar fate. Kuladhar Gogoi, in his late 50s, is a part-time farmer. The scale of the drought was such his farmland developed huge soil cracks, he said. The last time he saw a drought of such magnitude was 10 years ago.

The soil condition was not ideal for paddy cultivation.

“At this time the soil should have been flooded with water,” he said. Usually, rice seeds are planted in the soil a month after the soil is ploughed.

But fearing unpredictable weather, he sowed the crop seeds immediately after ploughing the soil. So did other many other farmers. “This affected the quality of the rice. I will make only 30 per cent of the crop yield this time,” he said.

On July 16-17, Assam finance minister Ajanta Neog and irrigation minister Ashok Singhal visited the drought-hit villages — right after the state declared them a drought-zone three days ago. Only to be accompanied by a heavy downpour that irrigated the fields.

“Now the rain-fed farming has come to rescue,” Kuladhar said.

Assam recorded 21 per cent less rainfall than normal between June 1 and July 28, according to the Indian Meteorological Department records. This meant the state received 625.3 mm of rainfall against normal rainfall of 792.3 mm.

Furthermore, the weather data recorded a cumulative deficit of 1 per cent from June 1 to July 25 in Golaghat district. The daily deficit — last recorded on July 25 — was 100 per cent.

Sunit Das, scientist at the Regional Meteorological Centre at Borjhar, Guwahati said it was not a surprise given that he had forewarned the rainfall crisis back in April. Sunit ruled out the role of climate change; Arup Kumar Sharma, professor, Indian Institute of Technology, Guwahati said an alarming pattern stuck when he studied the precipitation data recorded in tea gardens in Golaghat district over 100 years.

“Climate change is definitely happening. Even if the total annual precipitation rises or remains the same compared to the previous year, there will be longer droughts and floods.”

According to him, the precipitation in Golaghat district has always been less compared to the other regions in Assam. A hydrolelctric project, NEPCO (North Eastern Electric Power Corporation)’s Doyand, has disrupted the natural flow of the river Doyang, a tributary of the Brahmaputra river.

Doyang falls into Dhansiri river draining the Sarupathar region. “Floods are crucial to paddy cultivation. But they have stopped since the construction of the dam,” noted Hema Phukan, a retired professor and president of Jeepal Krishak Shramik Sangha, a farmer’s rights organisation in Assam.

On July 15, a day before her visit to the drought-hit villages, Ajanta Neog announced a compensation of an input subsidy for agricultural crops, horticultural crops, annual plantation crops, perennial crops and sericulture.

Farmers with 33 per cent crop loss or more were eligible for compensation. Animal husbandry assistance also had to be provided to small marginal farmers.

Pranab Doley, a senior leader of the Jeepal Krishak Shramik Sangha who contested the Assam assembly polls independently this year, dismissed the claim. Ronney Rajkumar, Golaghat district project officer, spelt out the compensation to be announced in a few weeks.

“As per the State Disaster Response Fund guidelines, the amount should be around Rs 6,800 per hectare of the crop lost,” he said.

But to Phukan, any one-time compensation is just a piecemeal approach, not a long-term solution. Sustainable approach of rainwater management and approach using multiple ponds, reafforestation and watershed management are the way forward in drought-hit areas, said experts.

Arup Kumar Sharma made these suggestions to the state’s agricultural department 15-16 years ago. The district’s disaster management official claimed the solutions were still in the pipeline.

Meanwhile, the affected farmers are yet to realise the compensation package. For farmers like Soh, getting used to any solution from the government’s end will take time. His village, Mirigaon, is yet to see any government-aided irrigation facility at work. Several irrigation pipes lay abandoned, either due to technical glitches or lack of cooperation from the communities regarding their use.

“The problem is deep rooted. The government gives importance to big companies and corporations, not farmers or micro producers,” Pranab said.