Unseasonal rainfall triggered by Cyclone Yaas, combined with COVID-19 restrictions, has led to few takers for the crop 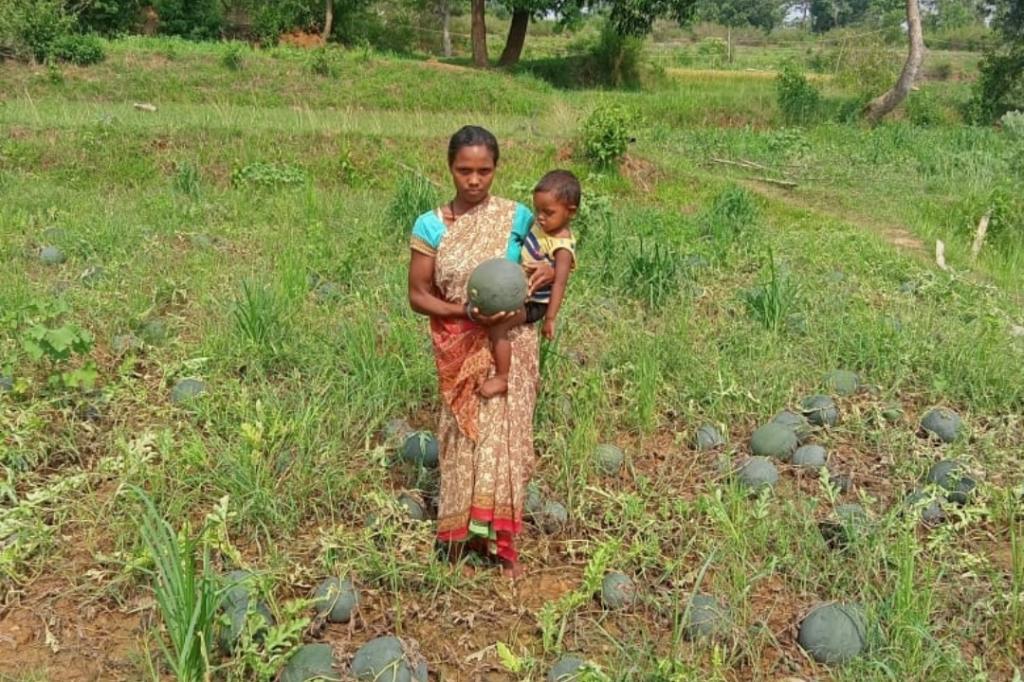 There are few takers for watermelons and fruits are rotting in the field, several farmers complained. Photo: Jharkhand Janadhikar Mahasabha

The novel coronavirus disease (COVID-19) and the ensuing lockdown had already hit hard; now, adverse weather due to Cyclone Yaas in May has made it a double whammy for watermelon farmers in Jharkhand.

There are few takers and fruits are now rotting in the field, several farmers complained. Debts are mounting and a lack liquid cash has cast a shadow on Kharif sowing even as monsoon has arrived.

Binita Devi was ready to harvest watermelons on her 2.4-hectare leased land when heavy rainfall lashed Murhu village in Khunti district in May-end. Some of the crop got damaged instantly, but most of it could be sold.

The private traders who would usually come to the fields to buy the crop did not visit the village for days, which led to the rotting of the crop.

“The traders didn’t come for days due to the lockdown and when they did, they offered to give only Rs 1-2 a kilogram as against the usual Rs 10-15 a kg. I refused to sell at such a low rate,” she said.

She added that the crop started getting damaged soon after, rather faster because of the unseasonal rainfall.

Parts of Jharkhand were battered by heavy rains because of the cyclone; capital Ranchi broke all previous records of rainfall during May.

A lack of village-level primary mandis (where farmers can sell their produce) prompts farmers to rely on private traders, who purchase the crop and sell it in markets, or export it to other states such as West Bengal and Odisha.

They don’t go to the market as the cost of transport would negate any profit they would make.

Lockdown restrictions in the state were eased on June 15, but Devi and her husband had already disposed of the fruit. They are now under a debt of Rs 2 lakh, out of which they took Rs 1.5 lakh on loan from ‘Mahila Mandal’ (self-help group) as well as from a bank in the village this year. They owe the bank Rs 50,000 from 2020.

“I sowed the watermelon crop on more land this time, thinking a bumper crop will help me pay back the entire amount. But I couldn’t make a penny,” she said.

She added that she owes Rs 7,000 lease amount to the landowner. The total cost of production this time is Rs 1.5 lakh.

Devi and her husband used to work as agricultural / daily wage labourers till three years ago, following which they started leasing out land for farming. They started with vegetables, but shifted to watermelon soon in hope of better returns.

Watermelon farming has grown substantially in the last five years. Currently, about 600-800 hectares of land is cultivated under watermelon in Ranchi alone.

Since farmers earned a good profit on the watermelon produce, it is cultivated in the other districts on a similar scale. During the last lockdown, many farmers were given permits. Railway also helped in transporting it to other states.

Ishwar Mahli, a farmer from Lohardaga district, does not have any money to sow the Kharif crop:  “Monsoon is here but I have no money left to even buy seeds.” He spent over Rs one lakh to produce the crop.

“This is the first time ever in the last 10 years that I couldn’t sell even a single piece. This crop would have sold well if there were no lockdown. A trader came to buy the crop but offered only Rs 1 per kg. I refused and he didn’t come again. I then contacted a transport guy to take my crop to the market. He demanded Rs 3,000 and I asked him to come the next day. He did not turn up either.”

The nearest market is around 15 km away and farmers couldn’t access it due to lockdown.

Towards May-end, state agriculture minister Badal Patralekh took cognisance of the issue and asked district officials to look into the problem. The help announced, however, hasn’t reached most of the farmers yet.

“The government has opened service centres for farmers looking to sell watermelons. This did help a few farmers, but the number is limited. It also promised compensation for the damages caused by the cyclone. I have filled out the form, but don’t know whether I will get it or not.  I usually invest Rs 20,000 on the crop and earn at least Rs 50,000. But in the last two years, I have just incurred losses and debt,” said Lakshman, a farmer.

“Small pieces (weighing up to two kg) and big ones (weighing upto five kg) are being sold at Rs 5 and Rs 10 respectively. We usually have 20-25 traders ready to buy produce, but right now we are hardly in touch with 10 traders,” said Aparn Uprao, who runs a non-profit.

Siraj Dutta of the Jharkhand Janadhikar Mahasabha said, “This situation again calls for the urgent need to fix minimum support price for all crops. The central and state government should compensate the farmers for their losses.”

He added that the Jharkhand government should ensure the selling of all crops at remunerative prices and also ensure no restrictions are placed during the lockdown for the transport and sale of the crops.