Government’s policy decisions and ground reports are in conflict with official data on sowing, production and agriculture insurance 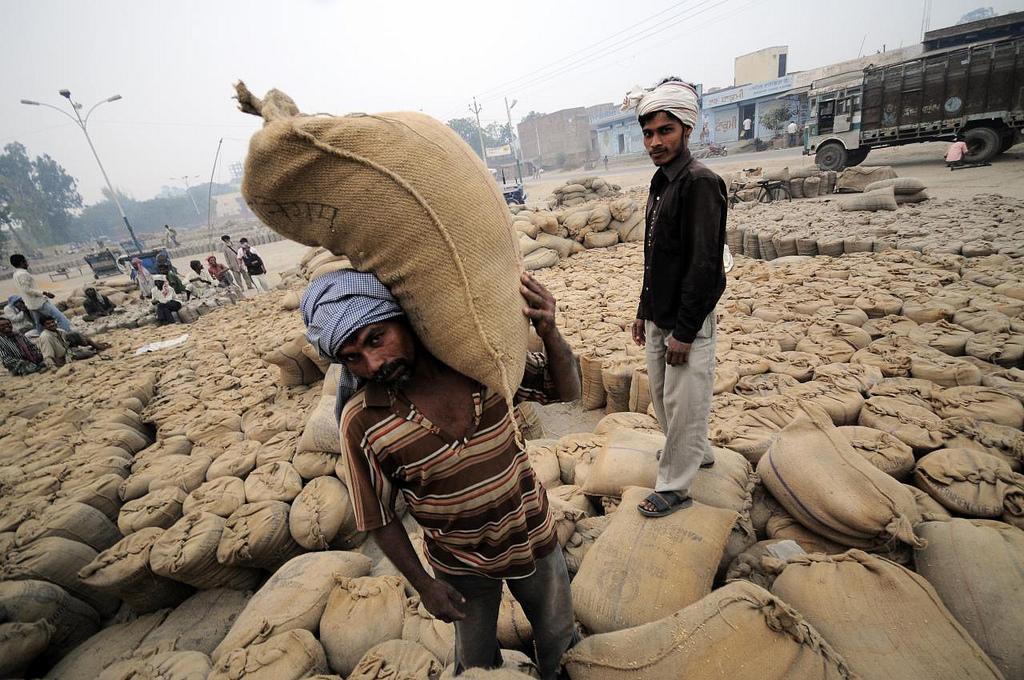 What puts a question mark on government’s claim that everything is going in ‘right’ direction is the sudden decision of importing wheat. Credit: CIAT/ Flicker

The Centre’s claim of 94 million metric tonnes (MT) (2015-16) of wheat production, good sowing acreage and success of agriculture insurance scheme is not in sync with reality as government’s own data do not match agriculture ministry’s claims.

The data related to increased acreage, bumper production and success of agriculture insurance scheme has been raising several questions instead of answering queries.

Sudden demonetisation has punctured the enthusiasm of farmers and traders of agriculture sector that was riding high in the wake of normal monsoon. After two years of continuous drought, normal monsoon has provided a chance to revive soil moisture and increase production. The chance is now slipping out.

The agriculture ministry is leaving no stone unturned for churning out positive headlines that seem to say, “All is well”. After demonetisation, the ministry started releasing weekly press releases stating that demonetisation has had no impact on sowing. However, the government decided to waive off import duty on wheat to encourage cheap import, especially from Australia and Ukraine. The wheat price has risen up by 30 per cent in the last four months.

Till December 23, 2016, there has been two per cent rise in sowing of wheat than normal average. Coverage of about 27.86 million ha has been reported for wheat as compared to a normal of 27.46 million ha. This is seven per cent higher (about two million ha) than 2015-16. Interestingly, due to demonetisation, wheat sowing area in early December was reported 12 per cent below normal. Within two weeks, it surpassed the normal average by two per cent.

What also puts a question mark on government’s claim that everything is going in ‘right’ direction is the sudden decision of importing wheat.

Moreover, there’s hardly any mention of paddy sowing dipping by about 30 per cent in comparison to both normal season and previous drought season in 2015-16.

Down To Earth reporters visited four different states a month after demonetisation and found that sowing has either slowed down or stopped. In most of the cases, farmers have stopped sowing due to the absence of cash.

The current central pool of wheat stock is 16.4 million MT, which is lowest in the last eight years. In December 2008, we had 19.5 million MT of wheat stock. But still, the government is claiming that its godowns are full.

The government released four different estimation of agriculture production based on monsoon, sowing acreages and market prices. There has been a huge difference in advance estimation and actual production, indicating ‘data manipulation’.

In the drought year of 2014-15, government’s production target was 94 million MT, but there was a shortfall of about eight million MT as the actual production stood at 86.53 million MT. Consequently, India imported wheat despite claim of huge production.

In 2015-16, too, the target was 94.75 million MT. This year was again marred by consecutive droughts that put groundwater at its lowest level. Despite that, the ministry’s final production projection (released in November 2016) stood at 93.5 million MT.

The actual production data is expected be released in January 2017, but in a sign of desperation, government has already decided to import wheat.

According to market analysts, the actual production would be around between 80 and 85 million MT. “Last year, sowing was reduced by three million hectare. It would certainly reduce production. The government was then reluctant to accept and yet again they overestimated production target in the fourth estimate. The FAO raised this issue with government of India in January but it was ignored,” says Bhaskar Goswami, an agricultural policy analyst.

"Government has been misguiding market and farmers to insulate consumers and traders from inflation,” says Dharmendra Mallik, a farmer leader from Muzaffarnagar who has been protesting over the decision to import wheat. According to Mallik, the lesser production of wheat would give better chance to farmers to get higher price. “Such decision would hurt farmers who have been facing drought and loss for the last two years,” he adds.

The official data seen by Down To Earth exposes the inflated claim of the government. The number of non-loanee farmers has reduced in comparison to 2015. Meanwhile, overall number of insured farmers increased by 19 per cent, thanks to the compulsion for every loanee farmer to buy this insurance scheme and pay premium.