Odisha’s paddy cultivation has been impacted due to rainfall deficit during the Kharif cultivation season, triggering fears of drought among farmers.

The southwest monsoon hit the eastern state early this year. But it also entered the ‘break’ phase sooner, leaving around 30 per cent deficient rainfall till August 15, 2021.

Paddy, the major kharif crop, is grown over 3.5 million hectares in Odisha. Till August 13 this year, the paddy coverage was only 2.46 million hectares due to low rainfall, according to local sources. 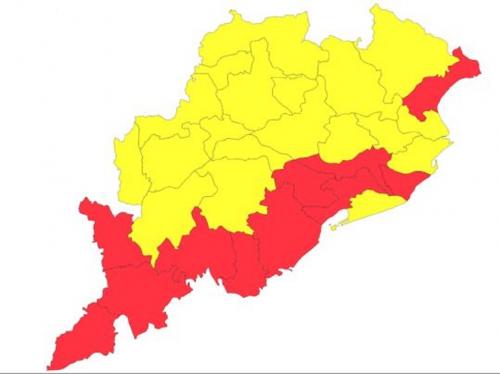 The normal rainfall from June 1 to August 15 is 749.5 millimetres (mm) across the state. This year, the state received an average precipitation of 524.8 mm during the period, according to the regional centre of Indian Meteorological Department (IMD), Bhubaneswar.

There was a rainfall deficit of around 63 per cent in August, which brought down the precipitation average of the kharif months, said Uma Shankar Das, a scientist of regional centre of IMD, Bhubaneswar.  All the 30 districts of the state received 68.5 mm rainfall cumulatively till August 15 against the normal of 187.2 mm, he added.

The lack of a remarkable low pressure areas over Bay of Bengal after June 10 was behind the weak monsoon in Odisha, said Sarat Chandra Sahu, director, Center for Environment and Climate, Siksha ‘O’ Anusandhan, a deemed university.

This was the reason for the erratic pattern of the rainfall in the state, added Sahu, who is also the former director of the regional centre of IMD, Bhubaneswar.

Widespread rainfall is likely to occur in the state on August 16-18 under the influence of the cyclonic circulation, sources said. The rainfall, however, is unlikely to compensate for the August deficit due to its low intensity, said weather scientists.

Usually, the Kharif activities start from May end and continue till August end. Farmers across the state worried over the perspective of the crop this year due to deficient rains.

Like every year, the farmers had started sowing in the first week of June after the rainfall, said Jaga Pradhan, a farmer in Chhendipada in Angul district. “But now, we are extremely worried because of the lull in the monsoon rainfall.”

The farmers had suffered immense crop loss during Cyclone Yaas in May this year and were hoping for a recovery this season. ‘The current monsoon trend will shatter our hope of bumper harvest of paddy this year,” said Bijay Behera from Chandabali in Bhadrak district.

There was no report of crop damage in the state despite a shortfall of paddy coverage due to scanty rainfall, officials of the state’s agriculture department said.

“The Kharif activities are going on till the end of August and we are hopeful the situation will improve this month,” said Amaresh Khuntia, professor of Agronomy, Odisha University of Agriculture and Technology (OUAT), Bhubaneswar.

He advised to continue the agriculture activities through localised rains and canal water, by removing grass and other samplings from the fields. He also suggested diversification of the crops in the situation.

The water resources department of Odisha has planned to provide irrigation facilities to around 27 lakh hectares of crops during this Kharif season from different sources. These include major, medium, minor, lift irrigation projects, deep bore-well and check dams.

But this will depend on the water level of the reservoirs and the monsoon rainfall trend, said a senior engineer.

Barring some major and minor irrigation projects, other projects can provide water for irrigation through the canal system. The water level of the reservoirs will be depleted and the situation may turn alarming if the dry spell continues some more days, he said.

The state has around 63 reservoirs, including 10 major ones, which can irrigate 4.3 million hectares, sources said.

In the Kharif season, the irrigation projects only supply around 50 per cent water needed for cultivation, while the other 50 per cent depend on the rain, said J Rath, former engineer-in chief, water resources department.

“We are monitoring the situation and are well prepared for any drought-like eventuality, state’s revenue minister Sudam Marandi said. Rainfall is still possible in the area this season, he added.