Doubling trouble: It’s mid-2022; is it good days yet for farm incomes? 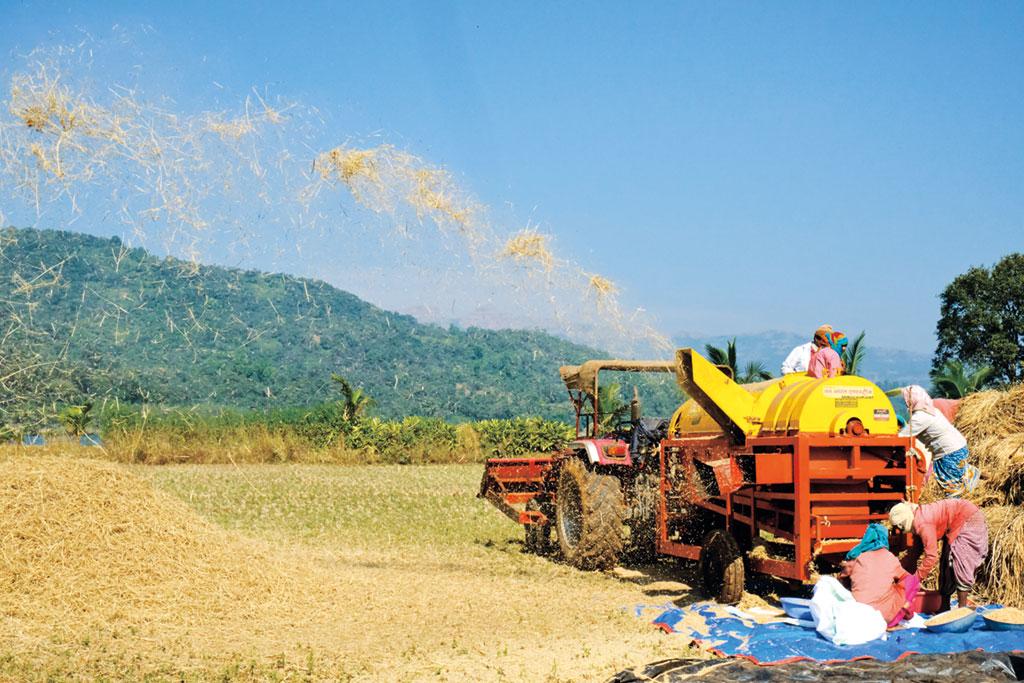 On February 28, 2016 Prime Minister Narendra Modi pledged to double farmers’ income by 2022-23—his gift to the country in its 75th year of independence. In the six years since then, the Union government has not given the most basic figures on how much farmers earned in 2016 and how much they earn now, making it impossible to know whether the farmers’ incomes have doubled.

Instead, ministers and officials have made a range of statements in the past two years on the issue. In 2021, Ramesh Chand, a member of the government’s think tank NITI Aayog, admitted that the target would not be met because of the repealing of three farm laws passed by Parliament in September 2020. The laws, feared to encourage corporatisation of agriculture, had triggered nationwide protests.

In contrast to Chand’s statement, Union Minister of Agriculture and Farmers Welfare Narendra Singh Tomar, during the 2022 Budget session in Parliament, listed 17 schemes initiated by the Centre and said that in the absence of income data, monitoring the performance of these schemes was enough to prove that the goal of doubling farmers’ income was within easy reach.

“The progress made so far indicates that we are on the right track,” Tomar said. Data, however, makes this assertion doubtful.

In three of the past five years, the Union agriculture ministry has spent less than what it had budgeted for centrally sponsored agriculture schemes. 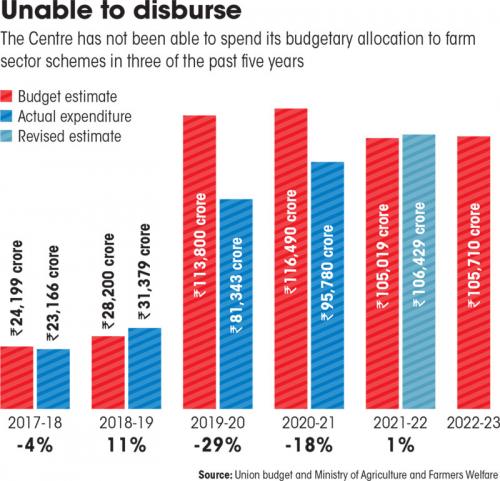 Under the PM-Kisan scheme, the Centre provides an income support of Rs 6,000 per year to each land-holding agricultural household in three equal instalments.

As many as 31.6 million households received the instalment in December-March 2018-19, which is only 33 per cent of the 93.09 agricultural households in the country in 2018-19, as per the latest Situation Assessment Survey released by the National Statistical Office (NSO), in September 2021.

This led to a sharp increase in the overall allocation that year.

The scheme’s coverage has since increased substantially and almost 107.6 million land-holding farmers received the April-July 2022-23 instalment, according to the government dashboard. But Rs 6,000 for a year is clearly not enough.

“The annual income of an average agricultural household in India is almost Rs 1,20,000. A Rs 6,000 increase can only make a marginal difference, since it does not even cover inflation,” said Arun Kumar, former professor of Economics at Jawaharlal Nehru University, Delhi.

The Pradhan Mantri Fasal Bima Yojana, the Centre’s flagship crop insurance scheme launched in 2016, covered only 46 per cent of the agricultural households (43 million) during the 2019 kharif season. By kharif 2021, the scheme had enrolled 49.2 million farmers.

While the schemes can serve as a measure of development and of relief provided to the farmers who choose to enrol, assuming blanket participation by all farmers can be misleading. Understandably, the actual income progress has also been limited since 2016.

Farming does not pay

The share dropped to 37 per cent in 2018-19. In fact, wages (39.8 per cent) have now replaced agriculture as the primary source of income for agricultural households.

The share of agricultural households under debt has reduced marginally between the two years, but more than half of the households have loans. The average amount of the debt has also increased from Rs 47,000 in 2012-13 to Rs 74,131 in 2018-19, shows NSO data.

Land fragmentation is the other challenge. The share of marginal agricultural households, possessing less than 1 ha, has increased from 69.44 per cent to 70.44 per cent between 2012-13 and 2018-19, according to NSO.

But the share of small and medium farmers (owning 1.01 ha to 10 ha) has dropped from 30.52 per cent to 29.2 per cent during the period. The share of rich farmers has remained constant at 0.4 per cent.

The target was always unrealistic, said Ramakumar. “It would have been possible had the government instituted a sharp course correction in its agricultural policy. It should have included a significant increase in public investment; an increase in farmer’s subsidy support; increased credit supply; and a 50 per cent increase in the minimum support price above the cost of production. At least we could have raised farm incomes substantially, even if not doubled them,” he added, Demonetisation and GST (goods and services tax), too, harmed prospect of raising farm incomes, he said.

Besides, if one were to accept the government’s assertion that the quality of farmers’ lives has improved, why has there been a rise in the number and intensity of farmer protests in the past five years?

According to an analysis by State of India’s Environment (SiE) in Figures -2018, an annual publication of Down To Earth, the country reported 35 major protests in 2017.

There were three broad reasons behind the protests in 2017: Crop loss, demand for fair prices, and forceful farmland acquisitions for developmental projects.

According to SoE-2021, in 2020, over 50 per cent of the protests were against economic and farm policies of the Centre and state governments — a clear indication that the policies are not helping farmers.

Procurement and pricing were the second most common reasons for protests (23 per cent), while land acquisition was the third (10 per cent). Insurance, loan waivers and poor farm infrastructure were the other causes.

Kumar said the solution lies beyond the farm sector, in the macro-economy. Bring in legislation that makes a “living wage” mandatory for workers and fixes minimum support price (MSP) for all crops after factoring in the full production cost (including components like cost of in-house labour and equipment).

“The demand for food will go up as the poor will then be able to afford adequate amount of food. As a result, the market price will go up, even beyond the current MSP, ensuring higher prices for farmers,” said Kumar.

A glimpse of this was visible during the pandemic, when the Centre distributed free grains. “The grains stocked up in government granaries were distributed and consumed by the poor. This indicates demand. But the poor cannot afford to buy enough food with their current incomes. Ensuring living wages will help. It will also reduce the problem of malnutrition,” Kumar said.