The impact of the novel coronavirus disease (COVID-19) lockdown can be seen in most of the main indicators released in the report. Photo: Vikas Choudhary / CSE

The per capita private final consumption expenditure, that represents consumer spending, dropped by 10.4 per cent to 55,609 in 2020-21, from 62,087 in 2019-20, a press statement by the Union Ministry of Statistics & Programme Implementation (MoSPI) said. 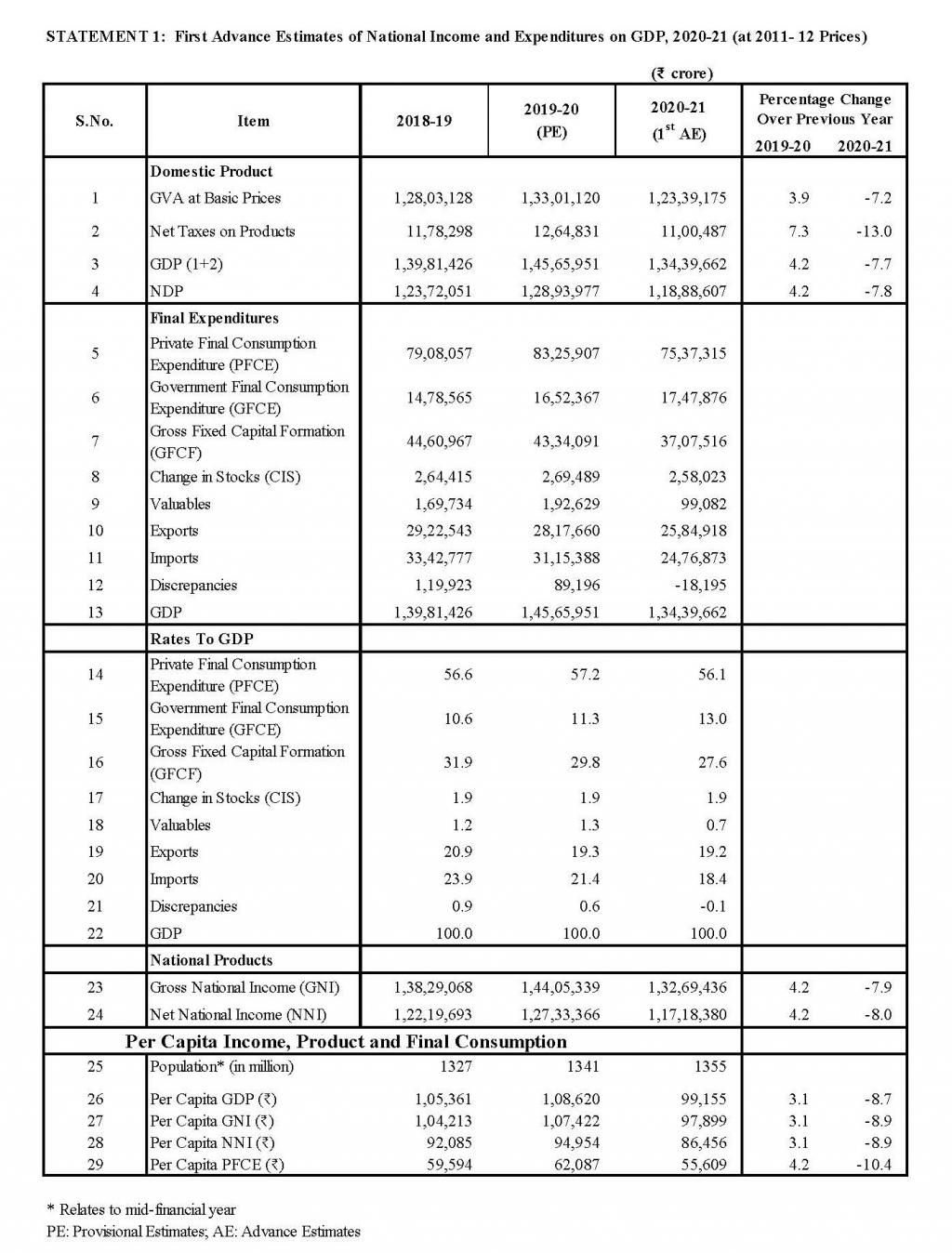 This is understandable as just two economic activities — agriculture, forestry and fishing, and electricity, gas, water supply and other utilities — have recorded a positive growth in this financial year.

The maximum contraction has been recorded in the trade, hotel, transport, communication and services related to broadcasting activity sector (-21.4 per cent), followed by the construction (-12.6 per cent) and mining sectors (-12.4 per cent). 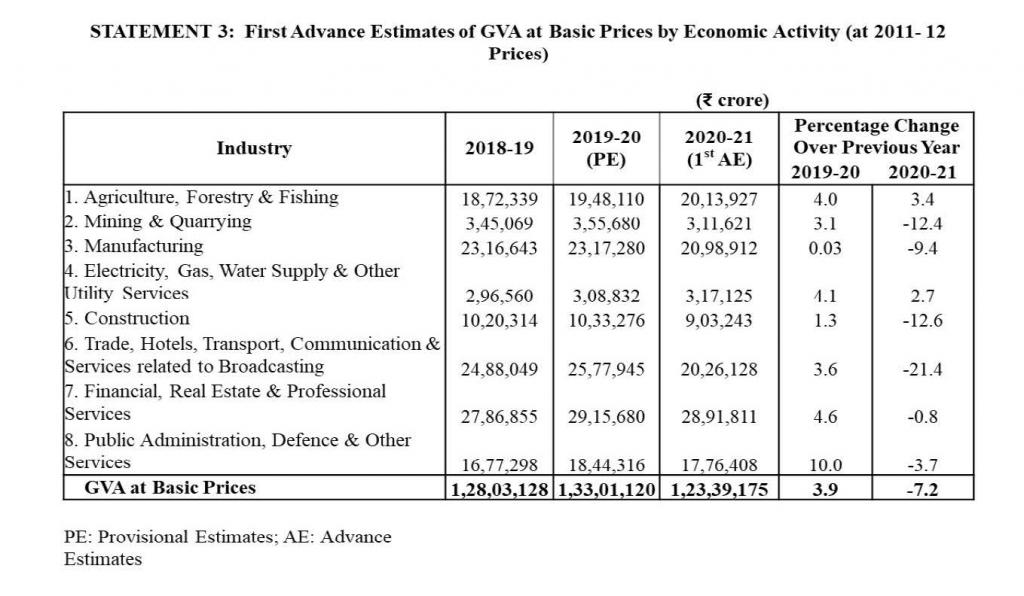 The impact of the novel coronavirus disease (COVID-19) lockdown can be seen in most of the main indicators released in the report, starting with production of cement and crude oil to the aviation sector.

The sale of commercial vehicles plummeted by 56 per cent and private vehicles dropped almost 25 per cent. The telephone subscriber base also shrank by 2.7 per cent. 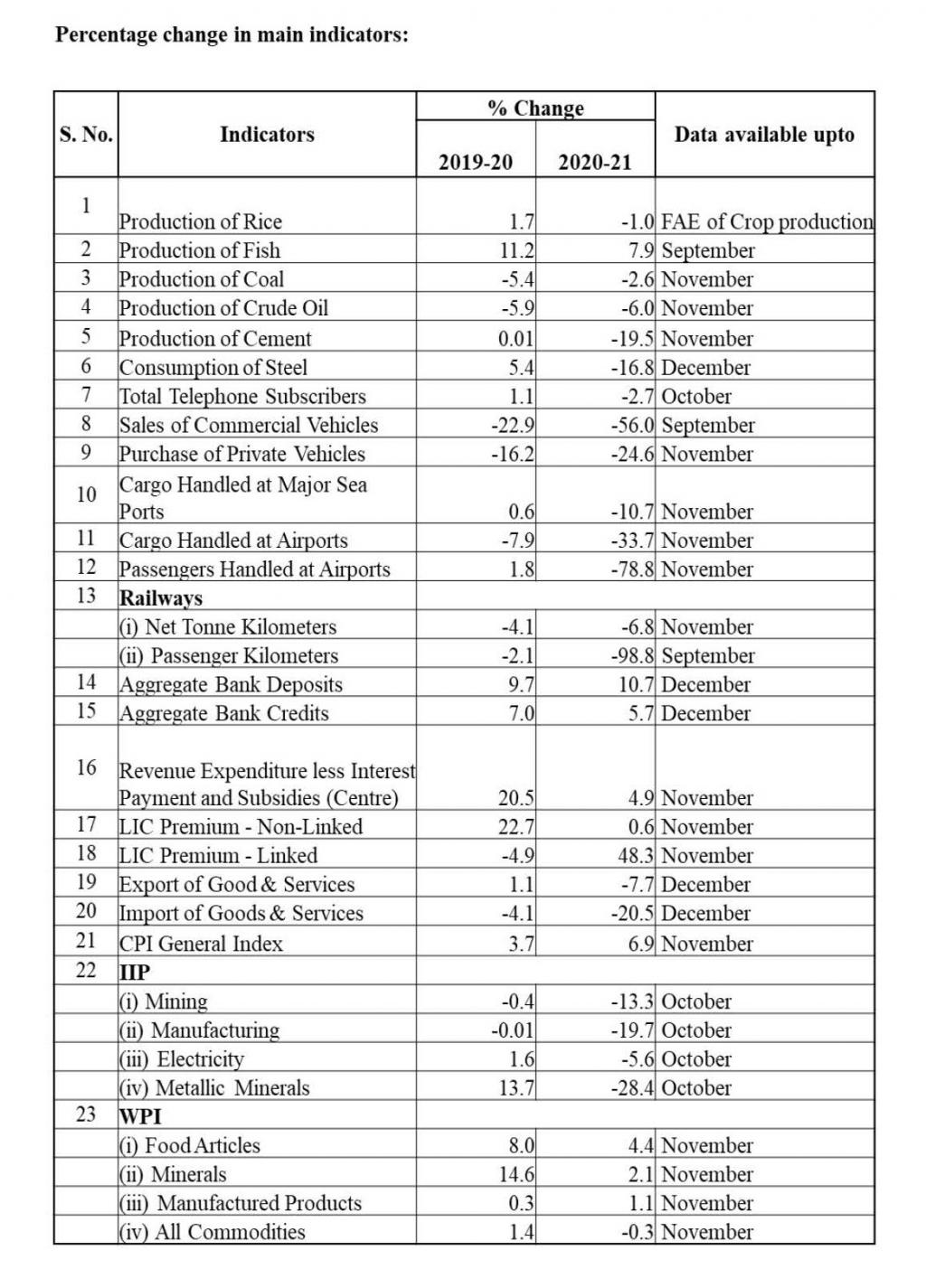 The Index of Industrial Production has also gone down: Metallic minerals (-28.4 per cent), manufacturing (-19.7 per cent), mining (13.3 per cent) and electricity (-5.6 per cent). The index shows the growth rates in different industry groups of the economy and the Central Statistical Organisation computes it on a monthly basis.

While the wholesale price index, the price of a representative basket of wholesale goods, of all commodities has gone down by 0.3 per cent, food articles have seen a 4.4 per cent increase.

The Second Advance Estimates of National Income for 2020-21 and quarterly GDP estimate for the quarter October-December, 2020 (Q3 of 2020-21) will be released February 26.

The First Advance Estimates of GDP are based on the benchmark-indicator method. The sector-wise estimates are obtained by extrapolation of indicators like:

Projections for 2020-21 for freight earnings of railways, passengers and cargo handled by civil aviation, cargo handled at major sea ports were also made available by the concerned agencies that were made use of in the compilation of estimates of the respective sectors.