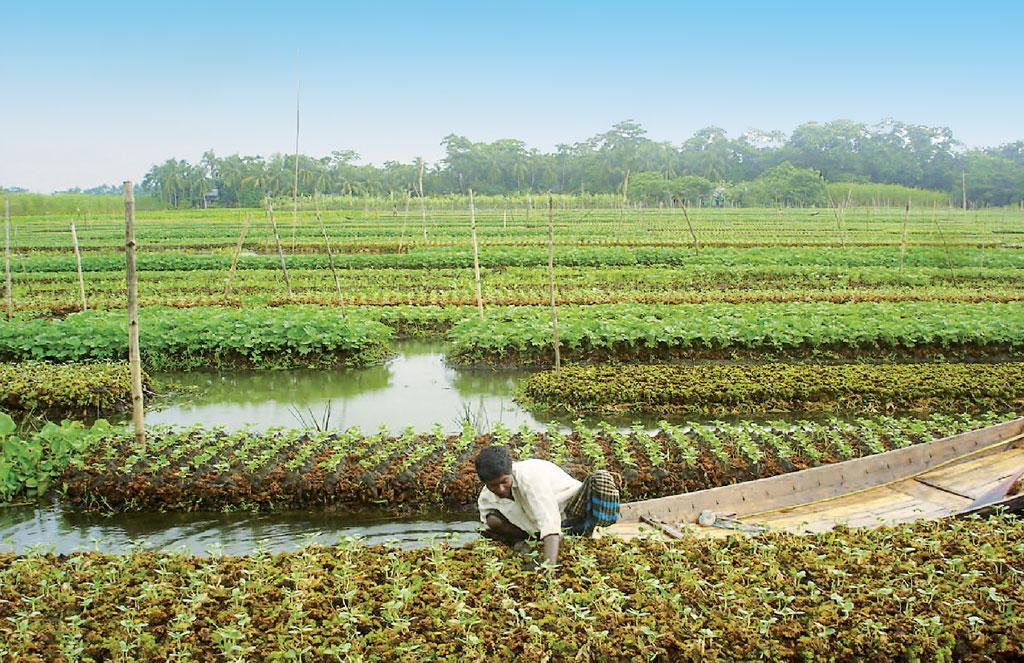 A floating garden in Bangladesh; Agricultural heritage sites are food systems that have evolved over the millennia in harsh and remote landscapes, thanks to the traditional knowledge of indigenous people. IMAGE COURTESY: ATIQ RAHMAN / MUSLEM UDDIN MIAH, BCAS)

What is so unique about saffron cultivation in Kashmir, rice-fish culture of China and Andean agriculture in Peru? These are all designated Globally Important Agricultural Heritage Systems (GIAHS) that have evolved over the millennia in harsh and remote landscapes, thanks to the traditional knowledge of indigenous people.

As part of recognition accorded to sustainable food systems across the world, 13 such new landscapes were formally celebrated as GIAHS in Rome on Thursday. The new agricultural sites are in China, Japan, Egypt, Republic of Korea, Mexico, Portugal, Spain and Sri Lanka. Currently, China tops the list with 11 GIAHS sites, more than any other country in the world.

According to the Food and Agriculture Organization (FAO) Director General José Graziano da Silva, “Since 2002, FAO has been actively engaged in recognising such sites, and the programme is now part of our core agenda to promote sustainable food systems. The objective is to support the international community to put forward food production practices that make skilful use of natural resources and protect soil health and biodiversity.” After the new additions, the total number of GIAHS stands at 50 worldwide.

Among the new sites are an agro-sylvo-pastoral system in Barroso, Portugal, a unique way of making salt in Salinas de Añana, Spain, a millennial way of growing muscatel grapes in Axarquía, Spain and a set of artificially developed farmland in Mexico City (Chinampas).

So, why are heritage agricultural systems important in today’s world? In these systems, water use, soil nutrition and other ecosystem factors are intricately linked, thus making them resilient to climate change.

Recognising these sites is important as smallholder famers, who have created these systems in the first place, play a great role in promoting biodiversity. Evidence indicates that GIAHS-designated sites safeguard endangered crop varieties, thus offering a food-secure future.

As part of something unique, Philippine farmers have developed hillside irrigation systems that allow them to share water from field to field. In Peru, Andean potato farmers dig trenches around their fields. These are then filled with water to be warmed by sunlight during the day. The purpose is to let off a warm steam that protects the crop from frost at night. Farmers in Algeria, Egypt, Iran, Morocco and Tunisia have developed sophisticated irrigation architectures and multi-layer gardens that capture the shade of date palms to grow fruits, vegetables and cereals.

In China’s rice-fish sites, farmers have managed to increase income from marketing their products. Here, farmers rear fish in flooded paddy fields.The Apatanis of Ziro Valley in Arunachal Pradesh also grow fish and rice together. This has twin advantages. While on one hand, the fish can be sold for extra income or eaten for nutrition, on the other hand, growing fish along with rice helps in controlling fungi and weeds that damage the crop. It thus reduces the dependence on pesticides.

In Bangladesh, floating gardens demonstrate how famers, who had suffered from flooding, can be innovative enough to counter a harsh environment. Similarly, the Kuttanad Wetland Agriculture System in Kerala is unique. It is the only system in India that grows rice below sea level in the land created by draining delta swamps in brackish waters. Even this has managed to reduce the impact of floods.