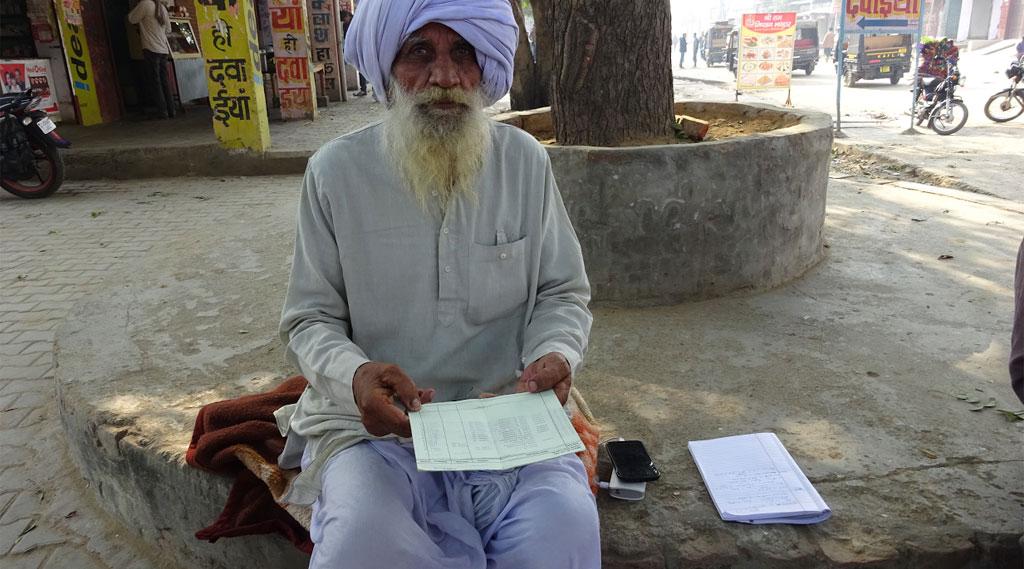 A farmer in front of bank, with his bank pass books showing crop insurance premium deduction from their bank accounts without his consent (Credit: Vineet Kumar/CSE)

More trouble seems to be in the pipeline for the ambitious Pradhan Mantri Fasal Bima Yojana (PMFBY) scheme, as farmers in Haryana are now opposing forceful deduction of premium from their accounts under the scheme.

Of the 696,000 farmers who had enrolled for the scheme in Haryana during the Kharif season of 2016, only around six thousand or 0.008 per cent did it voluntarily. Ministry of Agriculture and Farmers Welfare data shows that rest of the 690,000 farmers are “loanee” and farmer’s crop insurance premium was deducted from their loan accounts without their knowledge.

As per PMFBY rules, crop insurance premium was deducted mandatorily from the accounts of the farmers who have taken loan on Kisan Credit Cards. In most cases, the account holders were not aware about the premium deductions. Insurance policy documents or receipts of premium charges were not given to insured farmers by the banks or insurance companies.

Satyawan Narwal, head of the Rohtak chapter of Bhartiya Kisan Union and also a farmer, says, “We are not interested in this scheme with current provisions, that’s why only three farmers had opted for this scheme voluntarily in entire Sonipat district. Majority of the farmers have been forced to pay the premium.”

Questioning the premium deduction for the current Rabi season, he adds, “How can farmers allow the government to deduct insurance premium from farmers account for Rabi season when affected farmers have not been compensated so far as per the rules for their crop losses during Kharif 2016 under PMFBY scheme. All claim deadlines set under PMFBY have already been missed” The premium is due on January 10, 2017.

Bank officials are also under tremendous pressure by government to deduct premium amount and increase the enrollment of farmers under PMFBY. For instance, farmers in Ahulana village of Sonipat district have been coerced into paying the premium amount. Farmers claim that they were told by bank officials that 7% interest subsidy on loan will not be given if they refused to pay insurance premium. Similar cases have been reported in various villages across the Haryana.

The Bhartiya Kisan Union, along with other farmers, has filed a petition in Punjab and Haryana High Court demanding the termination of PMFBY implementation in Haryana state. The court has issued notice to the Centre, Haryana government and private insurance companies in the matter.

Farmers do not deal with insurance companies directly, which leaves their queries unanswered.  Most farmers are not aware if crop loss estimation for Kharif 2016 has been done in their village, as most of them are not kept in loop in the process of crop loss estimation.

Ramkumar Malik, a farmer in Ahulana village and retired army personnel informs that many farmers from his village have given signed applications to Ahulana Prathmik Krishi Sahkari Samiti Limited to not deduct their crop premiums.

“If despite all these concerns, crop insurance premium is deducted forcefully from farmers account without their consent, then there will be a long fight with banks and government,” he adds.