Satendar Dubey and Dhananjay Singh, both marginal farmers, were upbeat till early last week, in anticipation of a bumper paddy crop. Now, however, they are feeling anxious and worried after untimely heavy rains damaged the crop.

Dubey, the resident of a village under the Bhabua block of Bihar’s Kaimur district, said most of his fellow farmers were happy as it rained heavily during the hathiya nakshatra (September-end) after a drought-like situation in the early kharif season.

“Our happiness ended after untimely rains five days ago (December 14-16, 2019). These rains not only damaged paddy, they also added to the miseries of farmers like us, who are dependent on agriculture for their livelihood,” he said.

Singh, the resident of a village under the Dehri block of Rohtas district, said post the rains, he will be forced to sell his crop at throwaway prices.

”Neither the government agency Primary Agriculture Credit Societies (PACS) will purchase it, nor the traders. They will say rains have damaged its quality. I am very worried,” he said.

Singh said though the government on paper announced the procurement of paddy from farmers November 15, 2019, it is yet to start on the ground.

The procurement by PACS is very slow due to the ongoing PACS elections in the state. The procurement is expected to pick up either by end-December or January when the new PACS committee is formed and starts to function.

This kharif season, the government has fixed the target for paddy procurement at 3 million metric tonnes (MMT). In the 2018-19 kharif season, 1.44 MMT of paddy had been procured.

Dubey and Singh are two among hundreds of thousands of farmers, who have faced the adverse impact of changing rainfall patterns in Bihar in recent years. The changing patterns are due to global warming according to a report by Intergovernmental Panel on Climate Change.

Monsoon rainfall was deficient in Bihar this year, according to data from the India Meteorological Department (IMD). The state has recorded less-than-normal rainfall in the past seven years.

According to IMD, Bihar gets 1,027.6 mm rainfall in a normal monsoon year and its average annual rainfall — including pre-monsoon, monsoon, post-monsoon and winter — is 1,205.6 mm.

From 2012 to 2018, the state received deficient rainfall as can be seen in the table below: 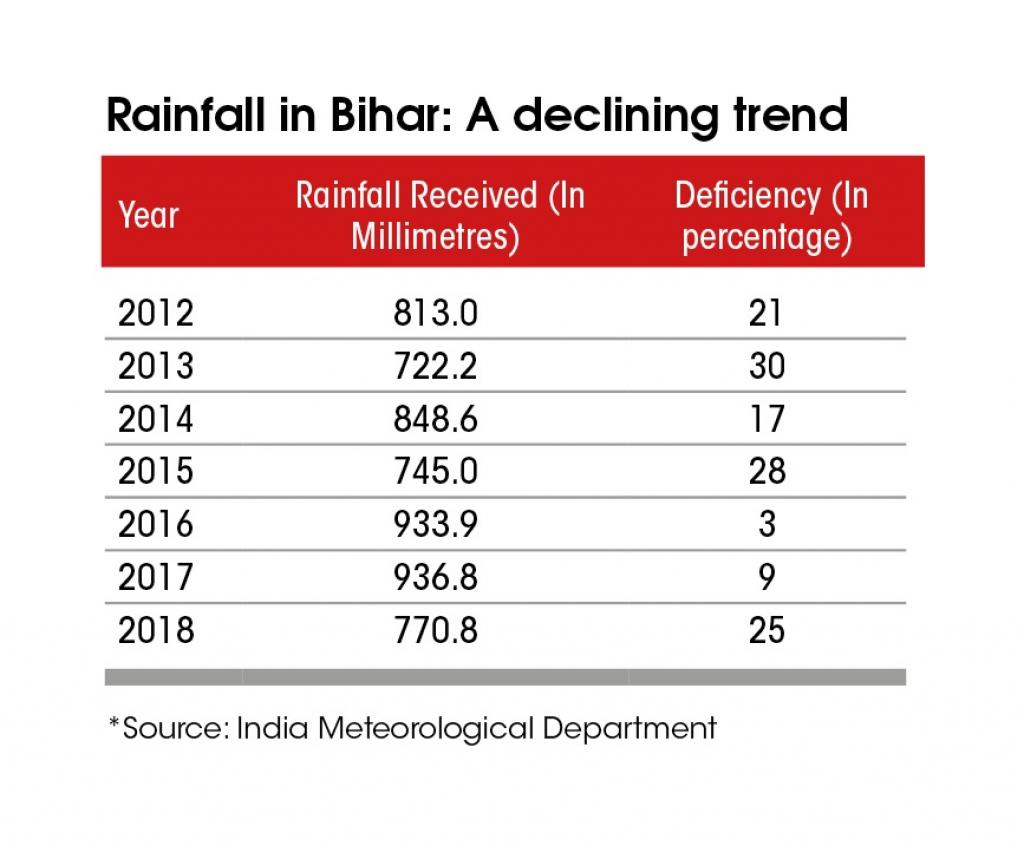 Dubey and Singh’s worries have been confirmed by the state government.

”The paddy crop has been damaged everywhere across the state by untimely rains. Reports of very heavy damage have been reported from Rohtas and Kaimur, which I had visited recently,” Umesh Kumar Mandal, joint secretary of the state agriculture department, told this reporter.

Kaimur and Rohtas, to which Dubey and Singh belong to, are together known as ‘Bihar’s rice bowl’.

Mandal said farmers in the affected areas feared that their harvested paddy, which had been submerged in rainwater, will now be of no use and would be unfit for milling rice.

According to another official of the department, rain has damaged 15 to 20 per cent of the paddy crop.

Ranjeev, a water activist, said the shifting rain pattern in Bihar was a serious cause of concern for all as it will directly affect agriculture and farmers, both of which are major contributors to Bihar’s economy.

Abdus Sattar, agro-meteorologist at the Rajendra Prasad Central Agricultural University in the state’s Samastipur district, said declining rainfall was neither good for agriculture nor for farmers.

In the last three decades, rainy days in the state had reduced to 37-40 from the long term average of 55, he noted.

Climate change on the ground

He is likely to announce compensation for farmers whose paddy crop was damaged — likely on 50,000 acres at least.