Farmers to continue protests after inconclusive meeting with government 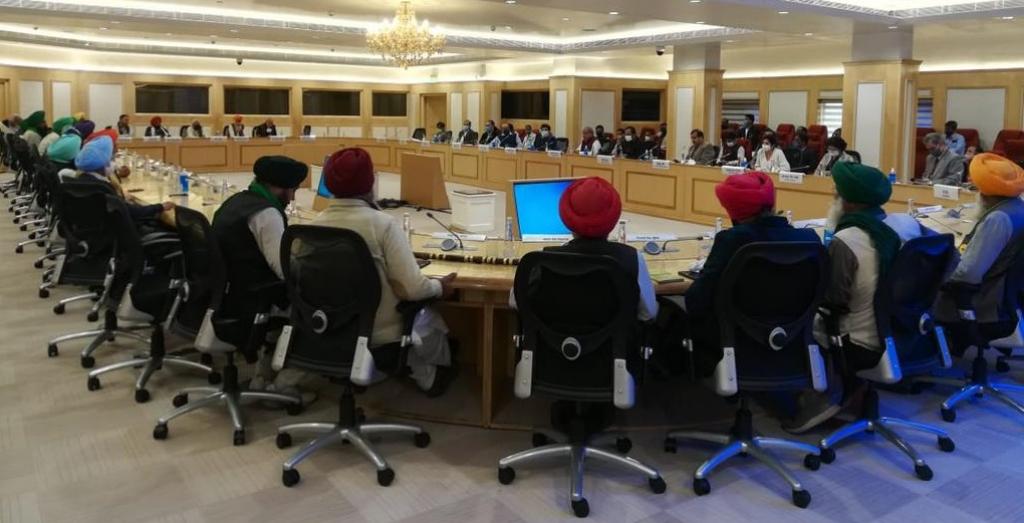 Protests by farmers against three recent agriculture-related laws will continue after a three-and-a-half hour-long meeting between Punjab farmer leaders and the government remained inconclusive December 1, 2020. The next round of talks is scheduled for December 3, 2020.

The government proposed a panel consisting of farmer leaders and agricultural experts to discuss the new farm laws. But the proposal was rejected by the farmer unions.

“They (government) had only one thing to say that a committee of four to five members will be formed to discuss the farm laws,” Jhanda Singh Jethuke from Bhartiya Kisan Union Ekta (Ugrahan), said.

“The Centre doesn’t want to find a solution. It just wants to keep having discussions. This could be conveyed to us without a meeting also. The government held this meeting to show the country that they are serious about farmers and want to stop farmers coming from other states,” he alleged.

“Our protests will continue. Tomorrow, all of our farmer representatives will sit and discuss points to be discussed for the meeting December 3,” Shiv Kumar Kakka, president, Kisan Mazdoor Mahasangh, said.

“Farmers won’t return empty-handed from Delhi. Now the government has to decide whether it wants to solve this issue or remove us by force,” he alleged.

“The meeting was good and we have decided that the talks will be held on December 3. We wanted a small group to be constituted but farmer leaders wanted that the talks should be held with everyone. We do not have problem with that,” Union Minister for Agriculture and Farmers’ Welfare Narendra Singh Tomar said after the meeting.

Meanwhile, the blockade at border areas will continue and the protests might even intensify as more farmers are joining those sitting on their sit-in at different border points including Singhu, Tikri, Ghaziabad and Kundli.

Earlier, the Chilla border (Delhi-Noida Link Road) was also closed in the wake of protesting farmers blocking the Delhi to it.

“We appeal to the farmers to suspend the protests and come for talks. However, this decision depends on farmers’ unions and farmers,” Tomar said.

Besides Tomar, Union Minister for Commerce and Industry Piyush Goyal was also present at the meeting held at Vigyan Bhavan.

Earlier in the day, the government also extended a fresh proposal for talks with farmers’ delegations from Uttar Pradesh, Uttarakhand, Haryana and Delhi at 7 pm December 1, 2020, Naresh Tikait, president, Bhartiya Kisan Union (BKU), who is protesting at the Ghaziabad-Delhi border, said.

The government had extended an invitation to 32 farmer organisations from Punjab November 30, 2020, for talks on the afternoon of December 1.

However, one of the 32 farmer unions boycotted the talks, saying that unions from all over the country should have been called for the meeting.

Satnam Singh Pannun, president, Kisan Mazdoor Sangharsh Committee, who was one of the members invited for the meeting, said, “We have boycotted the talks because the invitation is only for farmer groups from Punjab. There are many farmer unions from across the country who are protesting with us and should have been invited. The government is trying to split us.”

Another reason for him boycotting the meeting was the invitation letter not mentioning any proper agenda and just mentioning names of the people invited.

Before the meeting, it was mutually decided and conveyed to the government that the meeting will only be possible if members from the national leadership of the farmers’ movement (Sanyukt Kisan Morcha) were present.

A statement from All India Kisan Sangharsh Coordination Committee (AIKSCC) said that Home Minister Amit Shah agreed to this proposal on the condition that all members of the committee would be invited to the meetings except Yogendra Yadav.

“The 32 leaders discussed this and were ready to boycott the meetings against singling out of Yogendra Yadav. But when Yogendra Yadav was informed about this, he insisted that the negotiations at this critical stage should not be stalled only because if his non-inclusion,” the statement said.

“He offered to step aside and so that the movement must not suffer for one person. He requested the Punjab leaders to take their own decision, without thinking of him,” it added.

The three laws at the centre of the controversy are:

There is also the the Essential Commodities (Amendment) Act 2020, which deregulates production, supply, distribution of food items like cereals, pulses, potatoes, onion and edible oilseeds.

Farmers fear these dilute minimum support prices for crops, the government procurement regime and the mandi (wholesale market) set-up. They also fear a potential takeover of the market by corporate bodies.

Meanwhile, Canadian premier Justin Trudeau waded into the row regarding the farmers’ protests December 1. Canada is home to a large number of Indian migrants from Punjab.

He was speaking in a Facebook video interaction organised by Canadian Member of Parliament Bardish Chagger to mark the birth anniversary of Guru Nanak, the founder of Sikhism.

Trudeau said Canada was concerned about the situation in India and that the country would always be there to defend the right of peaceful protest.

Canada PM @JustinTrudeau raises the issue of farmer protests in India. Says, "situation is concerning.... Canada will always be thr to defend the right of peaceful protest". Adds, "we have reached out through multiple means directly to Indian authorities" pic.twitter.com/SKa0GJAMzr

Later, external affairs ministry spokesperson Anurag Srivastava said that the remarks were ‘unwarranted, especially when pertaining to the internal affairs of a democratic country.’