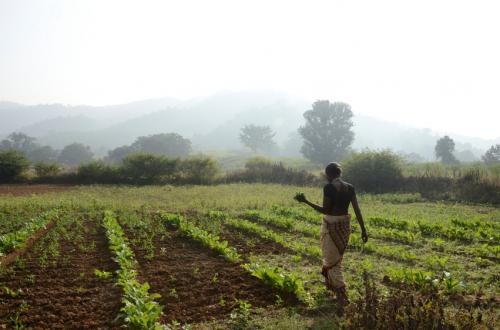 The Pradhan Mantri Fasal Bima Yojana (PMFBY) was launched in January to provide succour to farmers in case of crop loss or damage due to unseasonal rainfall, hailstorm, drought and other natural calamities.

The scheme mandates for states and the Centre to jointly share the premium. In an attempt to attract more farmers, their contribution has been kept low and uniform. Farmers have to pay two per cent in case of kharif crops, 1.5 per cent for rabi crops and five per cent for horticultural crops. The sum insured varies between Rs 35,000 and Rs 75,000 depending on the districts.

PMFBY is being implemented for the first time in the ongoing kharif season across India at a total annual budgetary allocation of Rs 5,500 crore by the Centre.

The government had targeted to bring 50 million of farmers under the scheme from current 30 million in Kharif season. But new estimates show that only an additional four per cent farmers have opted for crop insurance this year. In 2015, Kharif season the number of insured farmers was 30.09 million which increased to 32.40 million in 2016.

Meanwhile, the area under insurance has increased by 10 per cent as compared to 2015. This year, 37.2 million hectares of land was insured. The insured area fell to 33.9 million hectares in 2016.

At the same time, the amount of premium and insured amount has increased.

Targeted to bring a record number of farmers under the insurance net, the scheme is already facing hiccups. Few states like Uttar Pradesh and Rajasthan have tweaked the scheme to reduce the financial burden. Bihar had even refused to implement the scheme, but agreed later, after Union government’s persuasion.