Finally, a decision on agriculture comes through at Bonn climate talks

Parties have been invited to submit adaptation assessment methods for improvement of soil health, soil carbon and soil quality 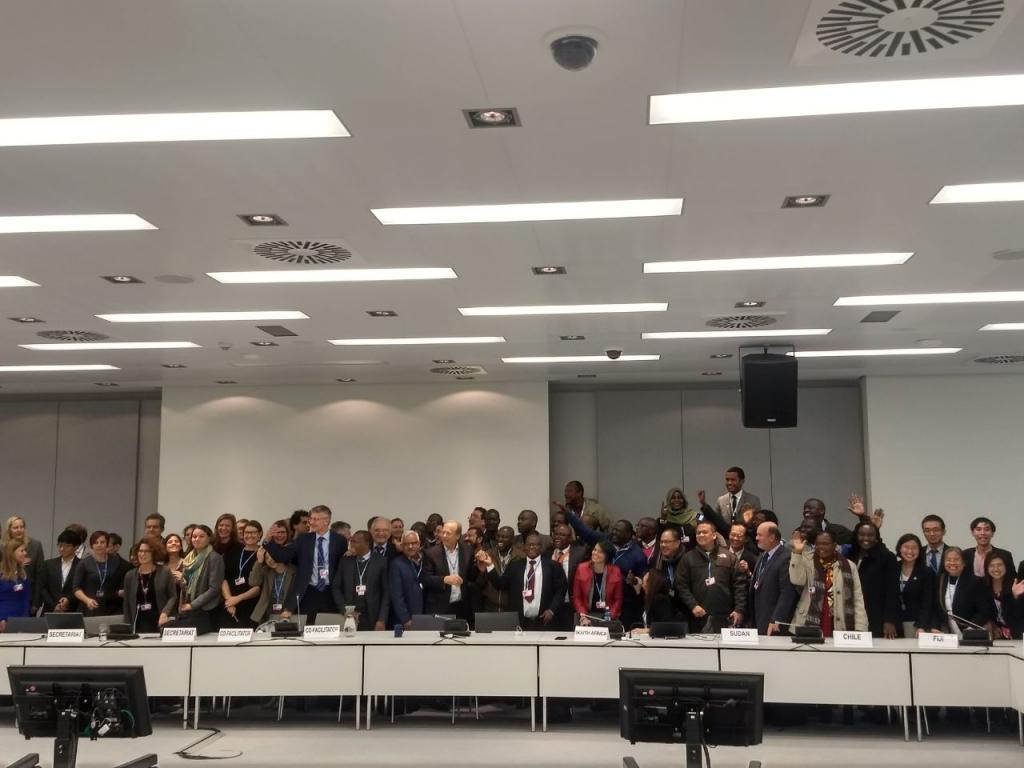 The final decision, which was read out to the group of negotiators and observers, was met with congratulations and jubilation. Credit: Shreeshan Venkatesh: DTE

After years of failure to arrive at a consensus, the member states finally reached a decision today on how to deal with climate actions in agriculture at the 23rd session of the Conference of Parties (COP23) in Bonn, Germany.

Consensus on the text of the decision was reached at the last minute; just before the final meeting on the subject was convened even as parties feared that another year would pass without anything substantial being agreed upon. It was only on Saturday (November 11), as parties failed to reach any agreement, dismayed members of the Africa Group of countries reportedly walked out before the meeting was even concluded.

The decision, drafted after years of consultation, has relied heavily on the draft document prepared by the G77 and China group of countries that was presented by Uruguay on behalf of the group last week for discussions and consideration. The final decision was also read out to the group of negotiators and observers who were present by the representative from Uruguay and was met with congratulations and jubilation across the table.

Parties are now required to submit views and recommendations on the modalities for the implementation of outcomes from five workshops held on matters related to agriculture during the years of negotiations. Parties have been invited to submit adaptation assessment methods for improvement of soil health, soil carbon and soil quality as well as considerations for the improvement of nutrient use and manure management.

Finally, the members will also have to report on socio-economic and food security dimensions of the impact of climate change on agriculture.

Finance remains a matter of concern

Actions on the above subjects have been listed as subject to availability of finance, which remains a huge question mark, while it has been decided that stock taking on actions undertaken in agriculture will be done during the 26th session of COP due to be held in 2020. The decision is being touted as a historic one in the often-neglected and slow-moving subject of agriculture.

“More than anything, there is a sense of relief among all parties. This has been many years in the making and it is natural for this relief to set in,” said one negotiator from a developing country where agriculture has been a major talking point. Although the negotiator was quick to add that the decision is simply a small step in the right direction and a lot of work is still required to carry forward the agricultural agenda.

It is not difficult to see what the delegate means, as the final text of the draft decision does not mention assessment of risk and vulnerability, the development of early warning systems, differentiation based on tradition, geography and ecology or the matter of transfer of technology or the explicit consideration of gender in dealing with the subject—all of which had found space in the draft document scripted by G77 and China.

Despite this, the decision is being viewed as a small but significant victory, especially for South Asian and African nations which have been reeling from agricultural losses due to unpredictable extreme weather and successive droughts over the past decade. “Although some matters have not been mentioned, they will continue to be discussed at SBSTA meeting on the work plans when specifics on such matters, which have been left out, can be thrashed out,” said one negotiator.

Although there are shortcomings, one outcome that people in developing countries like India can be happy about is that agriculture, from a predominantly adaptation-oriented perspective, has finally found a place on the map of climate negotiations and action.