The five southern states have recorded at least 26 major protests since September 2020. Of them, December saw the maximum 12 protests. 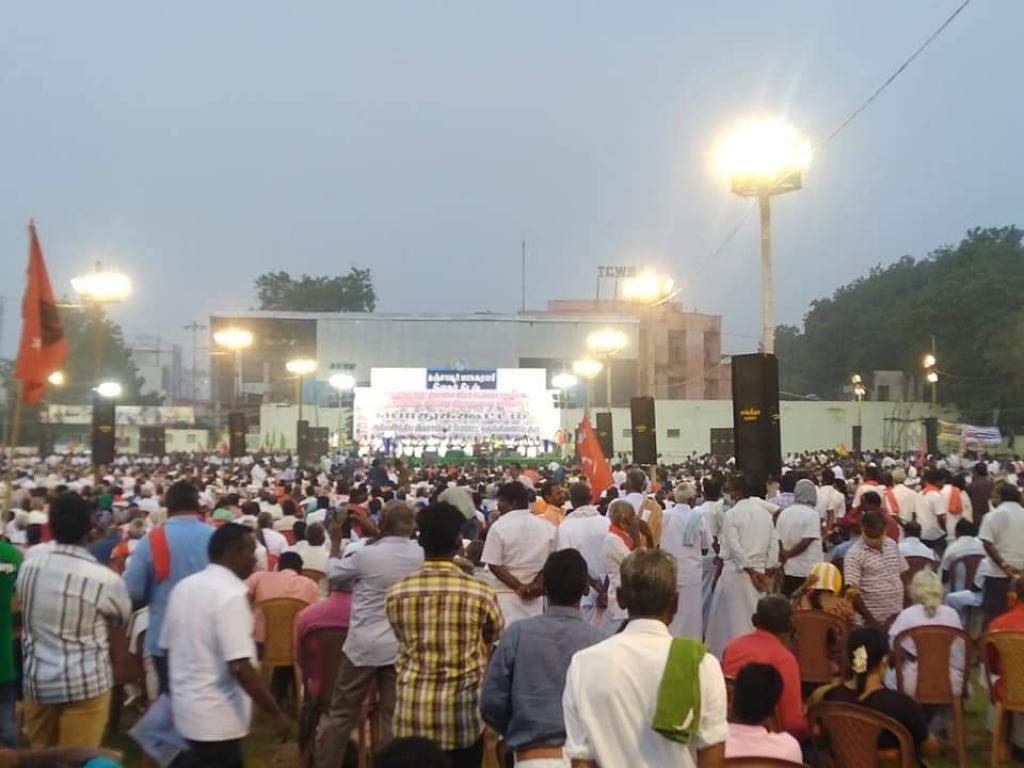 Attorney General KK Venugopal recently claimed that the three contentious agriculture-related laws — passed by Parliament at the speed of light — have been welcomed by farmers of all states except Punjab and Haryana: the legislations were perceived progressive by “rest” of the farmers, he claimed. “As far as Karnataka, Kerala, etc are concerned, there is huge support for these laws,” the Centre’s chief legal advisor told the Supreme Court January 12, 2020, reported www.livelaw.in.

There has been a perception, going by media reports of the court proceedings, that the southern part of the country has generally been more amiable to the laws; that only farmers of a certain region, often termed misguided, are blocking the roads to Delhi as well as national prosperity.

Even a cursory look at the farmers’ movements and reactions through the country reveals that protests from varied groups have been active since as early as June 5, when the three ordinances were promulgated by the Union Cabinet. There have been innumerable strikes, protests, effigy burnings and many other forms of active resistance. 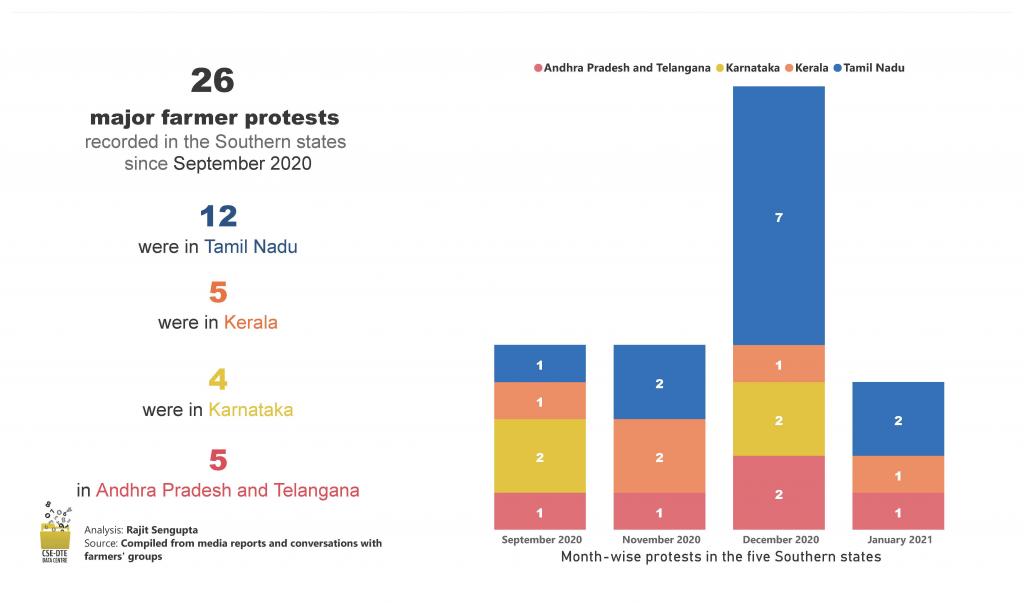 The five southern states have recorded at least 26 major protests since September 2020. Of them, December saw the maximum 12 protests. At the same time, farmer leaders across the five states confirmed they are planning to organise a tractors, cars and motorbike rally on Republic Day.

Individual farmer groups across Karnataka have been protesting since June 5, 2020. “In September, we decided to come together under a single umbrella Ikya Horata to oppose the three farm laws together,” says GC Byyareddy, president of farmer's movement Karnataka Prantha Raitha Sangha. In Kannada, Ikyais unity and Horata, fight. 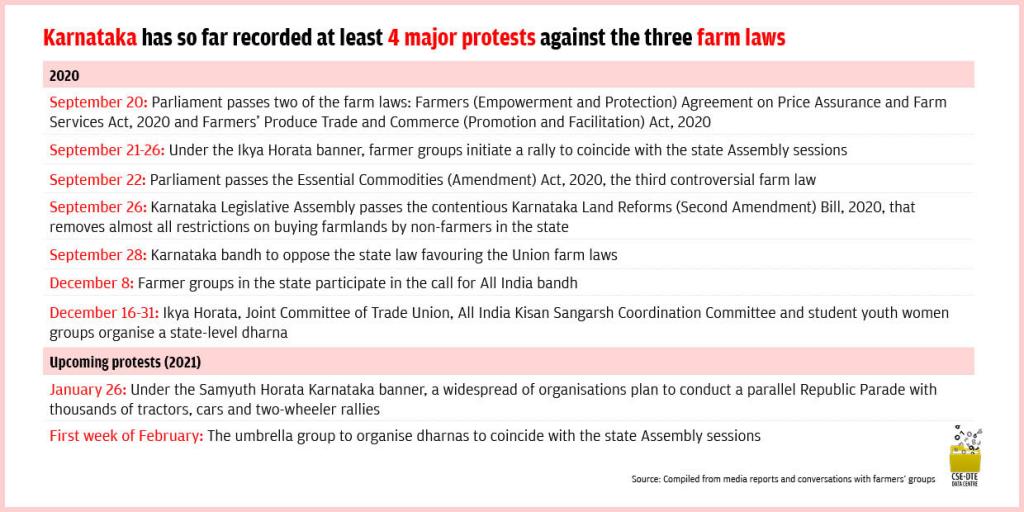 Byyareddy, who is also the state convener of the All-India Kisan Sangharsh Coordination Committee (AIKSCC), says that the protest is no longer restricted to farmers in the state. “We recently launched Samyukth Horata Karnataka, which includes not just the Ikya Horata participants but intellectuals and many other interest groups,” he told Down To Earth.

Tamil Nadu was also among the first sates to stage resistance against the ordinances in June 2020, claims Balakrishnan Kannan, convenor of the Tamil Nadu chapter of the AIKSCC, a national organisation for farmers and farm workers. Farmers in the state have hoisted black flags and organised a signature campaign during the COVID-19 lockdown in protest. 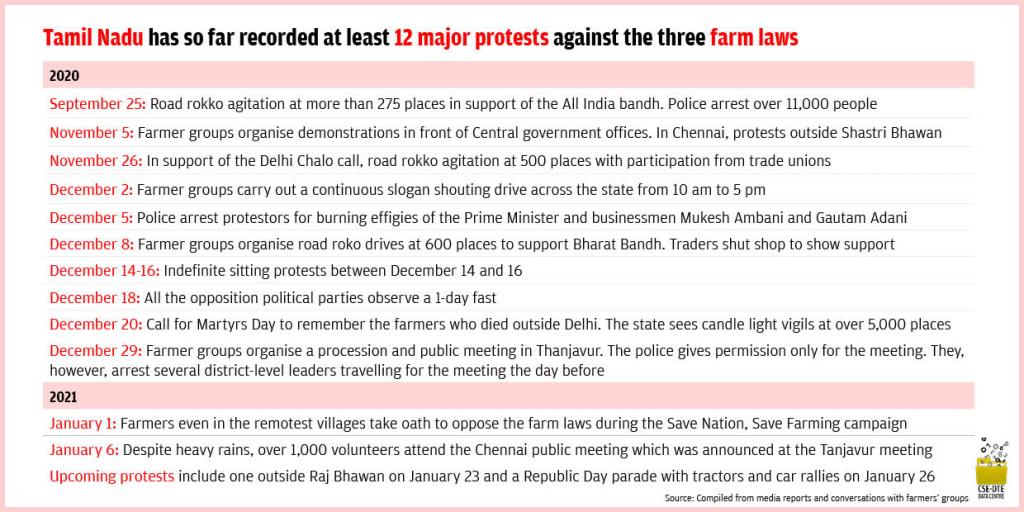 Since Tamil Nadu is by no means the only state protesting vehemently, on December 31, Kerala became the fifth state to pass a resolution in its Assembly against the three farm laws. The state chief minister, Pinarayi Vijayan, has called the laws “anti-farmers” and “pro-corporate”. Kerala’s assemble resolution came on the heels of similar measures taken by Punjab, Rajasthan, Chhattisgarh and Delhi Assemblies.

But Kerala’s story and anxiety is unique. “Kerala would be worst hit by the farm laws,” says K N Balagopal, state secretary of Kerala Karhaka Sangham State Committee. According to him, since the state is highly dependent on agricultural imports, the laws will realistically increase the prices of food grains and destabilize the economy beyond the single sector. “This is the reason even the state government is openly supporting us,” he says.

In Andhra Pradesh and Telangana, under the banner of Andhra Pradesh AkhilaPakshaRythuPorataSamanvaya Committee, farmer groups have regularly been demonstrating against the three laws. In Telangana, Left parties have mobilised farmers and have begun awareness campaigns about the effects and impact of the farm laws among them. They have been regularly organising meetings at the village, mandal and district levels to aid the process.

The protest events listed in this article represent only a small fraction of the actual on-site turbulence. The resistance is growing stronger since September 2020. The waves of protest are now assimilating other interest groups like women, dalits and traders to widen their range and magnitude.

Till now, the variegated and numerous protests in the southern states without much representation in main stream media seem to be beyond the Capital consciousness.