Most non-basmati varieties of paddy require watering around 40 times a season, while maize can do with just five-six rounds of irrigation. Photo: Reuters

In a last-ditch attempt to arrest the fall in its water table, Haryana is incentivising farmers to quit growing water-intensive paddy and shift to crops like maize and pulses. Launched on May 27, Jal Hi Jeevan Hai, the crop diversification scheme, is being implemented on a pilot basis in seven blocks, each in a different district.

A little over 0.19 million hectares (ha) is under paddy cultivation in the seven blocks, as per the Department of Agriculture and Farmers Welfare, Haryana. Of this, about 45 per cent (87,900 ha) is under non-basmati paddy — all known water-guzzlers — and the government seeks to wean off 50,000 ha through this scheme.

The farmers have time till July 24 to register their land if they want to avail the benefits of the scheme, which are free maize and pigeon pea seeds (though officials say that only maize seeds are available currently), a one-time financial assistance of Rs 2,000 per acre (1 acre equals 0.4 ha), crop insurance (the government will bear the premium of R766 per ha) and assured procurement under the Minimum Support Price (MSP) regime.

Talking to Down To Earth, Suresh Gahlawat, additional director (extension), agriculture and farmers welfare department, Haryana, said that by June 20, farmers had already registered 30,000 ha. However, most farmers DTE spoke to in Kurukshetra, one of the seven districts the scheme is being implemented in, were unsure of the scheme.

“I don’t know if the government will fulfil its promise of procurement,” says Sultan Singh, a 43-year-old farmer of Bir Amin village. Singh claims to have grown paddy on his 2 ha every kharif season for the past three decades. “Our village gets waterlogged in the rainy sea-son, which is good for paddy, but not for maize or pulses. In fact, a good rain destroys maize,” he says. “Moreover, maize also attracts neelgai (Asian antelope), which often destroys the crops here,” Singh adds.

Haryana has witnessed a groundwater crisis for quite some time. The problem was triggered when the government encouraged the cultivation of rice under the Green Revolution in the 1960s, intensified in the 1970s, when the crops became widespread, and has continued to worsen even in recent times. Between 1999 and 2018, the average fall in the state’s water table has been over 10 m, as per Haryana agriculture department’s Ground Water Cell.

The average fall in the seven pilot districts — Karnal, Yamunanagar, Jind, Ambala, Kaithal, Kurukshetra and Sonipat — is worse at over 12 m. “In areas where paddy is grown, the water table is depleting at the rate of 1 m per year,” says Gahlawat.

Nearly 85 per cent of Haryana’s cultivated area is irrigated by groundwater or surface water, as per Indian Council of Agricultural Research. The state has taken several steps to check the depletion, the most important one in 2009, when it banned the sowing of paddy before May 15 and transplantation of saplings before June 15.

This was done through a legislation — the Haryana Preservation Sub-soil Water Act, which seeks to push the sowing date closer to the monsoon season to avoid use of groundwater.

“Paddy requires watering 40 times a season. Maize can do with just five to six times. About 4 million litres of water can be saved per hectare if non-basmati paddy growers switch to maize,” says Gahlawat.

Water saved from every ha of paddy can irrigate three to four ha of maize. “Even the cost of cultivating maize is Rs 11,000 per ha, while paddy costs R26,000,” says Gahlawat. 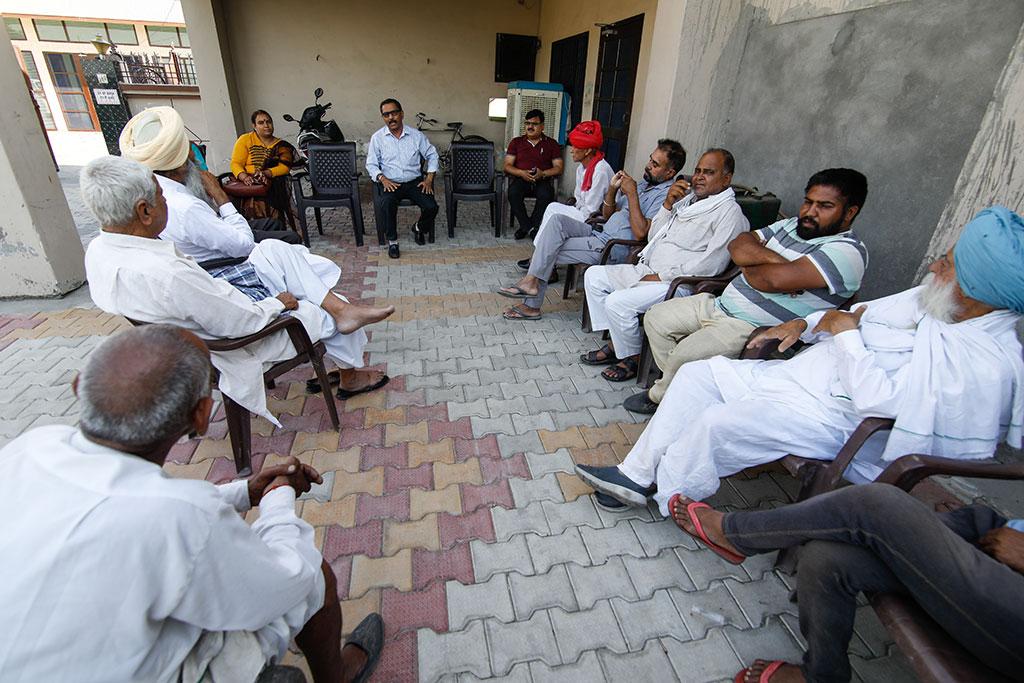 Farmers, on the other hand, say the economics does not work out. At Rs 17,500 per tonne, the MSP for maize is higher than that of paddy, which is R15,500 per tonne. “But the yield from paddy is 7.5 tonnes per ha while maize gives just 4 tonnes.

This offsets the higher MSP of paddy,” says Gurunam Singh Chaduni, a Bharatiya Kisan Union leader based in Kurukshetra. “A farmer can earn Rs 1 lakh per ha growing paddy, while maize gives a return of Rs 50,000 to Rs 70,000,” he adds.

Gahlawat views the sentiment against maize as an awareness problem. “Since farmers do not know of new farming methods, their maize yields are low,” he says. Vikas Choudhary, president of a Karnal-based farmer producer organisation, counters by saying that most paddy-growers are trained only to grow paddy and have equipment only for that crop.

“Reducing the moisture content of the maize grain within 12 hours of harvest is a must to enhance its shelf life. This requires a mechanical grain dryer, but most paddy-growers don’t have it,” explains Punit Kumar Thendi, head of the Vegetable Growers’ Associations of India. A mechanical grain dryer costs about R1 lakh.

Attempts to implement crop diversification schemes in other states too have not been successful. Punjab implemented a scheme to encourage maize in 2013-14, but the area under maize actually reduced from 0.13 million ha in 2014-15 to 0.12 million ha in 2016-17.

Same was the case with Odisha. Gahlawat counters by saying that Haryana is offering financial assistance and assured procurement, which these states did not.

Thendi suggest a two-pronged approach to promote maize. “One, the government should start procuring maize and two, it should encourage marketled solution like incentivising industries to invest on starch plants that use maize as raw material,” he says.

Ashok Kumar Gupta, president of All Haryana Rice Association, also emphasises the role of market. “How long can the government buy?” he says. Chaduni has another advice to kick-start the scheme. “To inspire confidence among farmers, the government should just procure the maize available currently in the market,” he says.

(This article was first published in Down To Earth's print edition dated July 1-15, 2019)