Here's why 40% of India's farmers want to quit 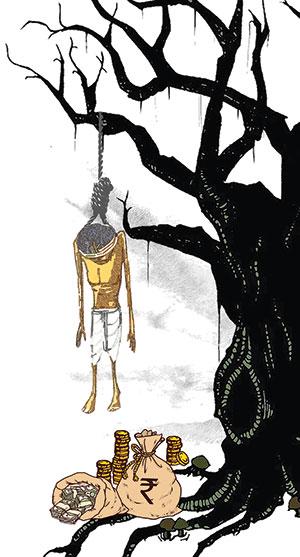 Agrarian distress is not limited to a single year or a particular place in India. Even in the highly productive East Godavari district of Andhra Pradesh, paddy farmers suffered losses in 19 out of 36 years, which forced them to declare crop holidays from time to time. In 2011, farmers declared crop holiday on a massive 40,468 hectares. Such acute farm distress often results in suicides. According to the National Crime Records Bureau, at least 8,007 farmers in the country killed themselves in 2016 alone.

To provide succour to farmers, Telangana, Andhra Pradesh, Maharashtra and Uttar Pradesh had earlier announced loan waivers. Though such a measure provides immediate relief, studies show that frequent loan waivers are not a solution for indebtedness, which accounts for 40 per cent of farmer suicides. In the long run, waivers discourage repayment by those who can afford to pay back. There is another drawback. Due to low repayment rates, banks either stop giving loans, especially to small-scale, marginal and tenant farmers, or use tactics like delayed sanctions, high collaterals and reduction in the loan quantum.

This leaves them at mercy of loan sharks

Refused by banks, small-scale and tenant farmers often approach moneylenders to buy seeds, fertilisers and pesticides. Sometimes, they also require money to dig borewells, to meet healthcare needs of family members, marry off their children and pay for their education. Disguised as farm input sellers, traders and commission agents, moneylenders hike input costs and suppress output prices, causing huge losses to the farmers. Moneylenders are present in every village. They are popular, as they provide instant loans without procedural delays and documentation. The flip side is they charge exorbitant interest rates, sometimes up to 60 per cent per annum and resort to coercive means to collect payment.

Compared to moneylenders, banks mostly meet the needs of wealthy farmers, who can provide collaterals. They also deal with big loan amounts involving complex procedures and documentation processes that take several months for sanction and release. Over the past 50 years, successive governments have tried to remove moneylenders from the rural credit market by nationalising banks, encouraging cooperatives and strengthening the network of regional rural banks. However, formal institutions have not been able to meet the increasing loan demands of farmers and together contribute to less than 50 per cent of their credit needs.

During the 1990s, microfinance institutions spread their operations mostly in the southern states of India. Though their interest rates are much lower than those of money- lenders, they still charge at more than 25 per cent per annum. To recover loans, these institutions often use cruel tactics like criminal intimidation, sexual harassment and labour without pay.

In recent years, a few states like Andhra Pradesh and Telangana have introduced Loan Eligibility Cards (LECs) to make tenant farmers eligible for formal loans. Under this process, the list of farmers is prepared by officials with the revenue or agriculture department with the help of gram sabhas. Then it is sent to banks for loan sanction. Under LECs, tenant farmers can avail loans on the value of the crops raised but not on the land, while the landowners can take loans based on the land, over which they have ownership rights. But even LECs are plagued with problems.

One of the reasons LECs are sparingly used is due to their multiple restrictions and the term of lease rate; tenant farmers have to pay up to 30 per cent of the gross income earned from the total produce to the landowner. Besides, some 90 per cent of land lease markets in the country is not recorded, and hence, tenants are in no position to offer lands as collaterals while seeking bank loans. As tenant farmers are more vulnerable to agrarian distress, including them in the formal agricultural development programmes is crucial for bringing down the number of farmer suicides. I think there is a need for liberalising, legalising and popularising LECs to make tenant farmers eligible for government schemes like credit, crop insurance, input subsidy and other benefits.

It is a dire situation out there. The recent National Sample Survey Office on farmer situation assessment says 40 per cent of farmers would like to quit agriculture if alternative employment opportunities are made available to them. To ensure that farmers continue with their profession, a few steps must be taken. Farmer cooperatives, farmer producer companies, self-help grou ps, farmer interest groups, land poo ling, collective farming and marke ting should be promoted to alleviate distress and improve the bargaining power of small-scale producers.

The Union government should enact a law to ensure that interest rates charged by both for­mal and in­formal financial institutions do not exceed 8 per cent per annum for farmers. The government also needs to subsidise losses and additional expenses incurred by financial institutions while disbursing loans. In the long run, market-based instruments should be developed to overcome agrarian distress. Insurance schemes should replace loan waivers in case of crop failure and all farmers should be entitled to claims. Right now, insurance schemes only benefit loanee farmers. The Pradhan Mantri Fasal Bima Yojana must cover all farmers irrespective of their loan status. At present, it is compulsory for loanee farmers and voluntary for the non-loanee. Covering all will reduce premium rates and subsidy costs on the part of the government.

(The author is director, the National Institute of Agricultural Extension Management, Hyderabad)

(This article was first published in the 16-31st july issue of Down To Earth under the headline 'Cut the noose').