The farmers are organising themselves to press for a key law supposed to protect them, to be implemented properly 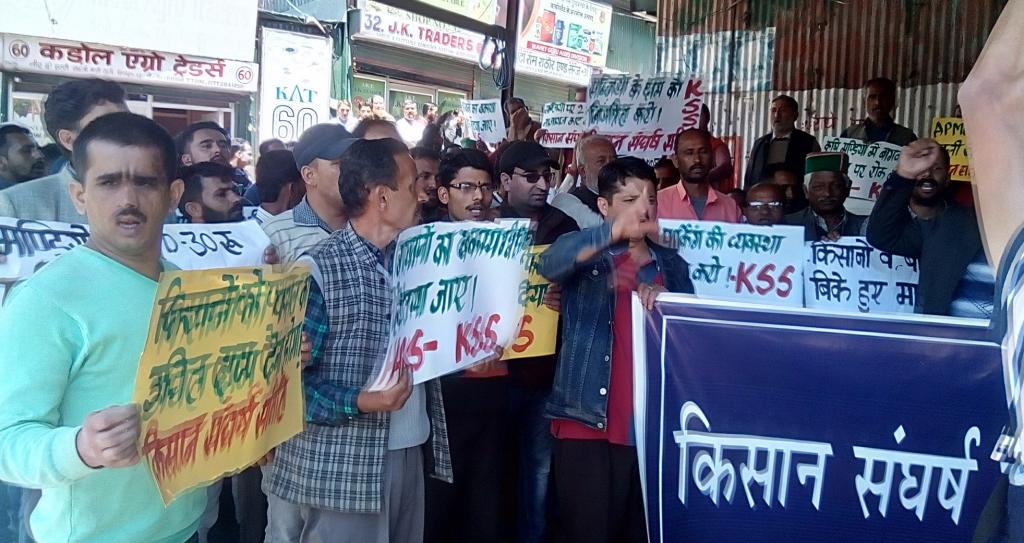 The apple farmers at a protest. Photo: Rajeev Khanna

Large scale discontent is brewing among the apple growers of Himachal Pradesh and it threatens to snowball into a major agitation in the days to come if timely interventions are not made by the government.

Over the last few weeks, apple growers are being mobilised on the issue of their being duped of payments by commission agents, many of whom have been doing a vanishing act, leaving the apple grower high and dry.

The movement is being galvanised by the Kisan Sangharsh Samiti (KSS), whose cadres have been moving from village to village in the apple belt, trying to identify and co-ordinate the apple growers who have been cheated by commission agents.

KSS functionaries claim that what has come to their notice is just the tip of the iceberg. In the recent past, there have been five First Information Reports (FIRs) in the Theog and Kotkhai areas of Shimla district, registered by 67 growers but it is being claimed that the number of the apple growers cheated can run into thousands and the amount they have been duped can be in the hundreds of crores.

KSS leaders allege that this is the outcome of the nexus between the commission agents and politicians. KSS secretary Sanjay Chauhan, who has been organising the apple growers for the fight for their dues told this reporter, “At the core of the issue is the non-implementation of the provisions of the Himachal Pradesh Agricultural and Horticultural Produce Marketing (Development and Regulation) Act, 2005. The Act, commonly known as APMC Act, is supposed to protect the interest of the farmer and horticulturist but it is not being implemented properly.”

He alleged that the licences for working as commission agents are issued to unscrupulous elements without required verification and these agents cheat the growers, who are unorganized.

Apple growers contacted by this reporter disclosed that after obtaining licences from the APMC, agriculture department and the marketing board, many of the commission agents open procurement outlets in villages or along the highways. “Initially, they make immediate payments to gain confidence. Later, they start dilly-dallying and finally, the majority of the partners vanish. Later, when we approach them, they threaten us,” disclosed Sushil Chauhan of Kotkhai.

According to the growers, the biggest violation pertains to Section 39 (2) (XXII) of the Act that says, “Without prejudice to the generality of the foregoing provisions, the Committee may, with a view to maintain stability in the market, take suitable measures to ensure that traders do not buy agricultural produce beyond their capacity and avoid risk to the sellers in disposing off the produce and grant licenses only after obtaining necessary security in cash as bank guarantee according to the capacity of the buyers.”

The growers say that this provision has been violated with impunity, forcing the apple growers towards distress. Another violation pertains to Section 39 (2) (XIX) of the Act that says, “Without prejudice to the generality of the foregoing provisions, the Committee may ensure payment in respect of transactions which take place in the market yard to be made on same day to the seller, and in default to seize the agricultural produce in question along with other property of the person concerned and to arrange for re-sale thereof and in the event of loss, to recover the same from the original buyer together with charges for recovery of the losses, if any, and effect payment of the price of the agricultural produce to the seller.”

“The growers are told that they would get their payments after a few days that gradually translates into weeks, fortnights and eventually into months. A trip to Parwanoo market from the village comes roughly to Rs 3000 for the grower and the commission agent lingers the payments on one flimsy ground after the other. After a while, some of these agents simply vanish or refuse to pay. They come up with excuses that they do not have money at hand as they are awaiting payments from those further down the line. In this case also, the onus lies with the APMC authorities that all the payments are made well in time,” says Sanjay Chauhan. He further said that the problem does not occur in context of vegetable farmers because the amount involved is normally not too high.

In their FIRs, the growers have mentioned that in certain cases, the commission agents at first, issue them post-dated cheques and later take them back, promising to make cash payments that are never made.

Interestingly, the matter was raised as a question in the state assembly during the budget session by Rakesh Singha, the lone CPM legislator from Theog who sought details about the number of apple growers cheated by commission agents in the last three years, complaints received by APMC and the FIRs registered. The reply submitted by the government said that a total of 99 complaints had been registered by January 15 this year of which, 81 had been made to the police. The total amount involved was Rs 26,691,426 of which Rs 88, 48,809 had been settled.

With the movement picking up, the apple growers held a demonstration at the APMC premises in Dhalli in Shimla that also caters to Kinnaur. These are the two main apple growing districts along with Mandi and Kullu. The demands aired were legal action against the commission agents who have cheated the apple growers, proper implementation of the Act and adequate facilities at the markets. The farmers and horticulturists have been saying that since they pay marketing fees, there should be basic facilities at the markets where their produce is procured. Among the biggest demands is a cold storage facility where they can store their produce if they do not get proper rates on a given day.

Kisan Sabha leader Kuldeep Tanwar said, “This is a very big issue since the apple economy in the state is worth Rs 4,000 crore annually and roughly one-third of the state’s population is dependent on linkages of the apple economy.”

A large number of farmers who attended the demonstration, had brought the receipts given to them by the commission agents over the last three years. “We hardly have time and resources to run after the defaulting agents. Many of them have been declared proclaimed offenders and are yet not being arrested by the police. We also feel humiliated when we have to keep asking them for payments,” said Sant Lal from Bakhrala village near Kotkhai.

Many farmers could not turn up for the protest because of a hailstorm on April 21 destroying their crop. They are also annoyed that barring Singha, none of the other 32 MLAs who come from the apple- producing areas in the state, have raised the issue of their being cheated.

Singha said, “There are sufficient clauses in the APMC Act to address the concern of the farmers. The farmers remain at a disadvantage even after more than 70 years of independence as certain traditional practices have always been in the favour of commission agents who dictate the market.”

Sources says that one of the major reasons behind the commission agents not paying the apple growers is the reeling impact of the demonetisation brought about by the Narendra Modi-led government in the Centre. But the growers say that this is no excuse for the APMC authorities not taking action against the commission agents who have vanished or are not making the payments.