India’ fodder crisis: Why cattle owners in this Haryana village want to shift to dog-breeding 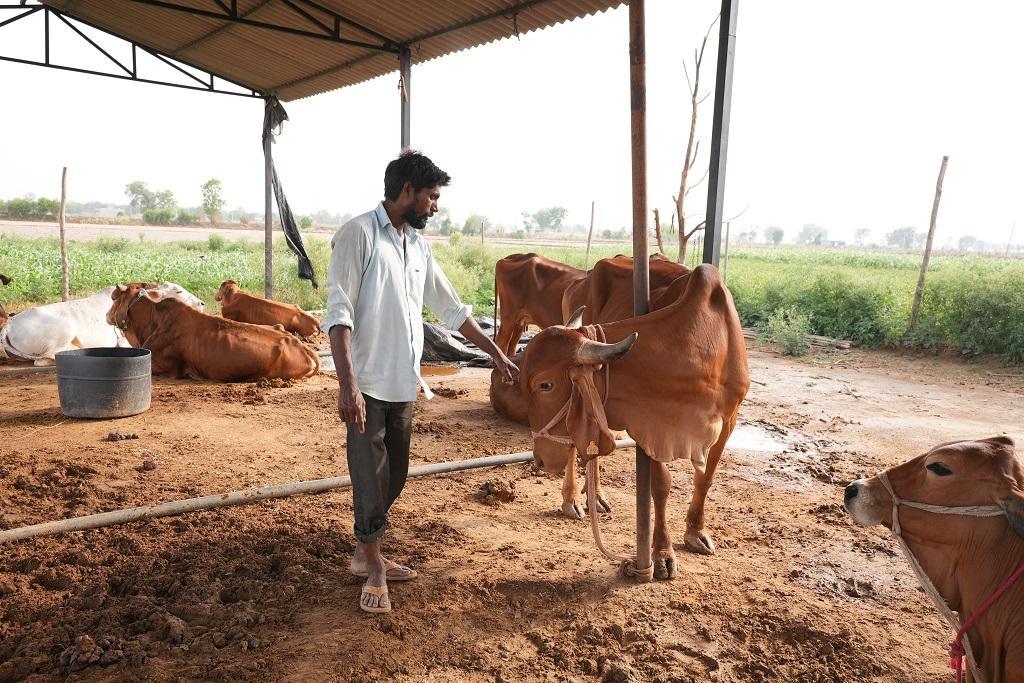 Mangatram has been a dairy farmer for 15 years in Lokra village of Gurgaon. Photo: Sunny Gautam

Mangatram from Lokra village in Haryana’s Gurugram district had hopes of good income when he left his job with Hero Honda 15 years ago and started dairy farming.

Initially, he fetched a good money from dairy farming, then he  became a veterinary doctor. He felt that dairy farming had a future and this education would help him in his milk business and that he could take care of the animals in a better way.

Mangatram started with two buffaloes. The following year, he bought cows of Gir, Sahiwal, Rathi, Tharparkar breeds and kept increasing their numbers year after year. The going was good till the end of 2021, when he started realised that animal husbandry is no longer a profitable deal.

The sudden increase in the price of fodder forced him to move away from animal husbandry. By February-March 2022, he gradually started weaning his 39 milch cows. By the end of April, 28 cows were removed from the dairy farm.

Mangatram, who lives in the Lokra village of Manesar tehsil in Gurugram, said that it is becoming impossible to feed animals amid rocketing prices of fodder.

This year, he has bought straw at the rate of Rs 1,500 a quintal. Last year, he got the same straw at a price of about Rs 425 per quintal. That is, within a year, the price of straw has increased more than three times.

On an average, a cow consumes 5 kilogram of dry fodder, 6 kg of animal feed and 10 kg of green fodder, according to Mangatram. This means, each meal a cow eats costs Rs 260 per day.

This does not include the cost of labour charges and medicines, which costs Rs 2,000 per cow. If we convert this expenditure per day of a cow in a year, then we will find that only about 95,000 rupees is being spent on fodder and feed.

Apart from this, there is an expenditure of Rs 24,000 in the form of medicines and labour charges. That is, the yearly expenditure on a cow is about Rs 1.19 lakh.

A cow gives 2,500-3,000 litres of milk in a year, according to Mangatram. There are two-three months of dryness in a year and during this time, the cow gives no milk.

Mangatram was thus incurring a loss of Rs 54,000 per cow every year. It is becoming impossible for him to bear this loss, he said. His family incurred a loss of Rs 2.5-3 lakh between December 2021 and March 2022 due to the widening gap between cost and income.

Mangatram does not expect fodder to become cheaper in future. Mustard has been sown on 70 per cent of the land and wheat on the remaining 30 per cent in his village, which may be a reason for this inflated price.

Till a year ago, there were 450 cows in his village but at present, due to the shortage of fodder, people have sold about 300 cows, said Mangatram.

Anticipating that the situation will not be favorable in future, Mangatram is also planning to sell his remaining cows and is thinking of completely stopping the dairy farming.

He has started keeping foreign breed dogs in the dairy farm and is seriously considering adopting dog farming. He said that selling dog puppies will give better income than raising cows.