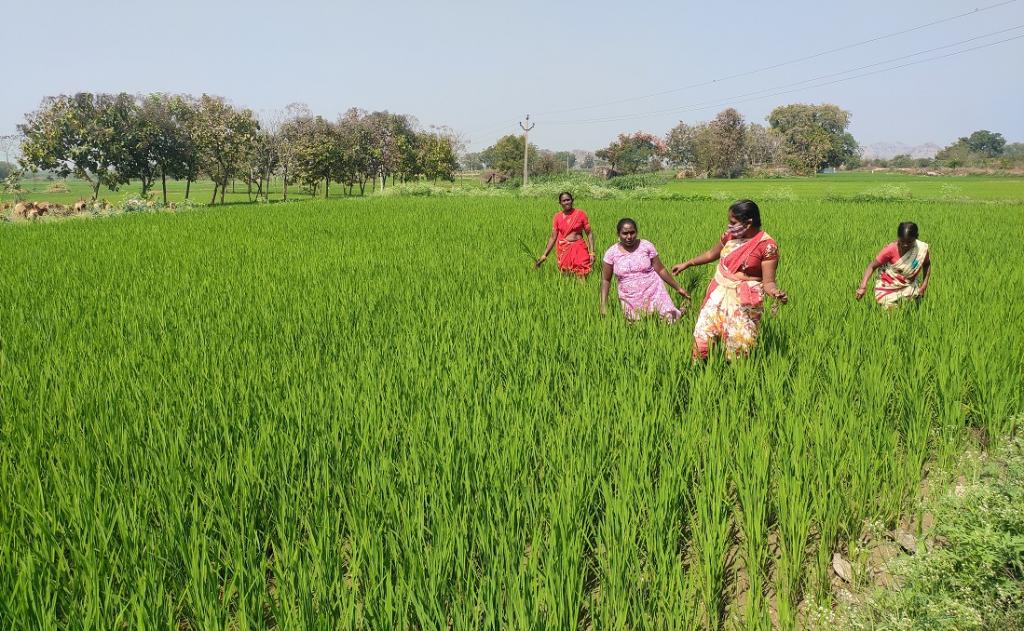 On a hot February afternoon, K Jaya, along with three other women is taking out weeds from a lush green paddy field in Telangana’s Jagiripalli village. She complains of heat but is also happy that the crop is a fruit of the labour of all women and the rewards will be shared among themselves.

The women are not merely agricultural workers but farmers who have sown the crop collectively and share the cost and the income too collectively.

In Karimnagar, where Jagiripalli is and Siddipet districts many women are claiming financial and social autonomy by forming small groups and doing collective farming on leased land.

The land is either leased from one of the group members or from someone else in the village where a group of women collectively manage a crop from sowing till after harvest.

The concept of group farming in not new in the state but it had been out of practice for some years now.

Women in at least 42 villages of the two districts revived it last year to overcome the novel coronavirus disease (COVID-19)-induced economic crisis after a grant of Rs 50,000 per group was facilitated through the non-profit Bhumika Women’s Collective in Hyderabad.

While the grant was only for 15 villages, the rest are using part of the funds from a United Nations Development Programme group farming project that started in 2001 and continued till 2005 and their own contributions.

Most of them used to work as agricultural labourers but now are delighted to call themselves “farmers”.

“As it is, we were doing most of the agricultural work in somebody else’s field but for a wage. This way, we can sow our own crop, take our own decisions on the field and earn for ourselves and our family,” Jaya said.

While forming the groups, the already existing structure of sanghas (women’s collective) of the Telangana Mahila Samatha Society was used and preference was also given to single women, landless women, and whose husbands are deemed as “irresponsible”.

Non-interference of men in group farming is a common narrative across the villages.

“This is something we have of our own. When we work with men, they become domineering in decision-making,” Sunita B, one of the group members in Raikalthanda village, said.

The women prefer crops that can be cultivated without the help of men. For example, they are aware that tobacco is a profitable crop but they don’t want to cultivate it because they will have to ask for help from the male members in their households.

“It is a difficult crop to cultivate. Support of men is required as there is more physical labour than paddy or other crops. But if we form a mixed gender group or ask for their help, we will lose out our autonomy on the field and profits,” Jaya said.

The sons of many of these women have asked them to train them in group farming after looking at the success of the model.

“They showed their interest and asked us for support. But the funding is limited, so we couldn’t do much,” B Khomi of Raikalthanda village, said.