The weed, considered harmful in wheat-growing countries, can reduce the productivity of wheat crops if not controlled

The weed has been found wheat fields across 25 villages of Haryana. Photo: Getty Images

The weed, of the family Polygonaceae, is native to Australia and South Africa. It is commonly known as ‘doublegee’, ‘three corner jack’ or ‘spiny emex’. This weed prospers in conditions such as drought and unseasonal rain. Climate change helps increase its numbers, according to researchers.

“The weed needs to be controlled as it can later affect yield,” said Virendra Kumar, a scientist at Bioassay Division, Central Insecticides Laboratory, who co-authored a research paper on the weed along with scientist Ekta Kumari.

The weed was first reported in India in Santhal Pargana division of erstwhile united Bihar in 1984 and in Jammu & Kashmir in 1987. In 2016, its presence was reported from upper Gangetic plains in Uttar Pradesh.

In those instances, the weed was sparsely distributed. But the current findings in Haryana are alarming.

During their research, the scientists found that the weed first appeared in small patches on wheat plants. The patches later grew into continuous ones, which can reduce yield. 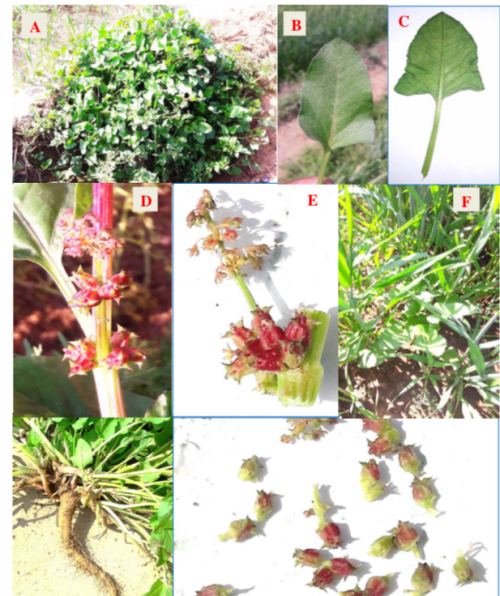 Spiny emex is considered as harmful in Australia, the United States, Japan and New Zealand. Its seeds can remain viable for several years even during unfavourable climatic conditions. It is capable of producing 1,100 seeds that can travel long through different modes, including rubber tyres, shoes, agricultural produce, livestock and machinery.

Many invasive pests including Fall Armyworm and Rugose spiralling whitefly have recently invaded Indian agriculture. The have caused enormous food losses and posed a great threat to India’s food security and farm prosperity.

Besides pests, the entry of some invasive weeds has also created headaches for farmers. Recently, the invasive ‘Onion Weed’ or Asphodelus Fistulosus, a native of North Africa, Southern Europe and West Asia, has invaded onion farms in Ahmadnagar and Aurangabad districts in Maharashtra.

This weed, which is looks like an onion plant, can potentially damage India’s self-sufficiency in onion production. This weed could also make land infertile if it is not controlled in a timely manner.