It may take at least 25 years to double farmers’ income: study

NITI Aayog is conducting a study to assess farmers’ income. For the first time, year-on-year growth in farmers’ income is being assessed. According to the initial findings of the study, which is yet to be released, the growth rate of farmers’ income on real price (which adjusts inflation) is 3.8 per cent per year. At this rate, the Modi government’s target of doubling farmers’ income by 2022 will not be met. It will take at least 25 years from now to achieve it.

When it comes to market price, growth rate of farmers’ income was a whopping 11 per cent per year, according to the ongoing study.

The NITI Aayog’s assessment, which was made for the period of 2011 and 2016, has only factored in cultivation, livestock and fisheries to measure growth, and excluded the contribution of forestry towards farm income. This is where the lacuna lies. This method of calculation puts the income growth of agricultural households of Himachal Pradesh in the negative and reduces the rate of income growth of other two states—Kerala and Uttarakhand—to 1.6 per cent. Non-inclusion of income from forestry makes the calculation flawed as farm income in these three states is heavily dependent on forestry.

However, in most of the other states, forestry has a nominal contribution to farm income. Hence, in those states, if income from forestry is taken into account, the rate of income growth will be further reduced.

The states such as Maharashtra, Punjab, Haryana, Karnataka and Gujarat, which are reeling under agrarian crisis, have been experiencing lowest income growth rate. These are the states where the rate of farmer suicides is reportedly very high.

Income growth in Maharashtra’s agricultural households is almost stagnant at 0.7 per cent. The rate of growth in Punjab and Haryana is 1.2 per cent and 1.6 per cent, respectively. Faring marginally better is Karnataka (2 per cent) and Gujarat (2.2 per cent).

According to the study, Madhya Pradesh has been annually growing by over 16.5 per cent, the highest among all the states. Ironically, the state has been witnessing several farmer protests in the last few years demanding fair price for the produce and farm loan waiver.

In 2016, when Prime Minister Narendra Modi vowed to double the income of farmers by 2022, no one knew the exact income of farmers. Till then, the only reference point was the NSSO report on income of agricultural households of 2012-13 that pegged the average household income to Rs 6,426 per month.

Last week NABARD released its report which assessed rise in farmers’ income by 39 per cent in the last three years. 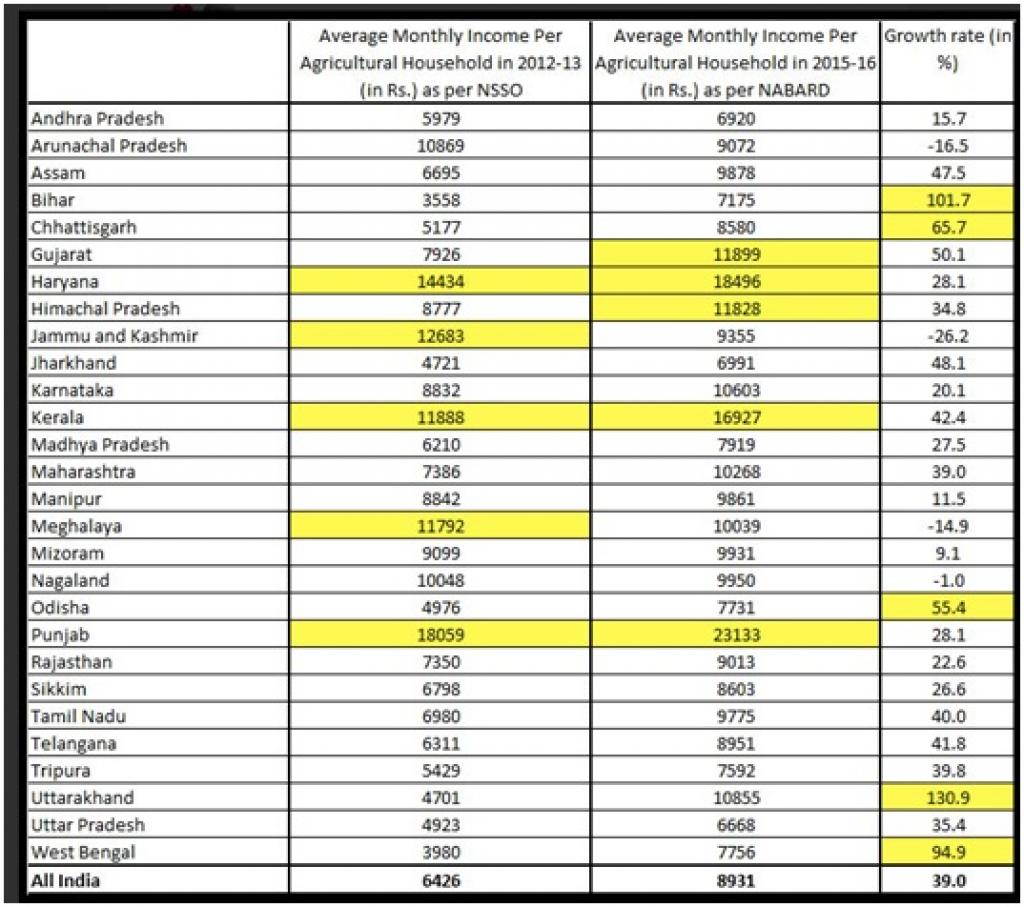 Issues with the NABARD Report on farmers’ income

Critics are sceptical of such a phenomenal growth in income in just three years.

Harsh Kumar Bhanwala, chairman of NABARD, states in the foreword that the study measured income from NSSO study of 2012 and also shared its findings with NITI Aayog, Finance Ministry and Reserve Bank of India. However, the same report also says that the estimates are “not strictly comparable with other survey estimates available due to differences in concepts and definitions”.

“The NABARD study is aimed at reaping political benefit instead of ensuring that farmers are benefitted,” says Abhishek Joshi, a farmer activist based in Delhi.

After analysing recent report of NABARD in comparison to NSSO, income from agricultural activities like cultivation and animal husbandry are almost static. The rise in income has been observed only from non-farm enterprise and wages. (See table)