Many farmers in coastal Odisha were expecting a bumper harvest; however, rains due to Cyclone Jawad inundated fields, destroying crops 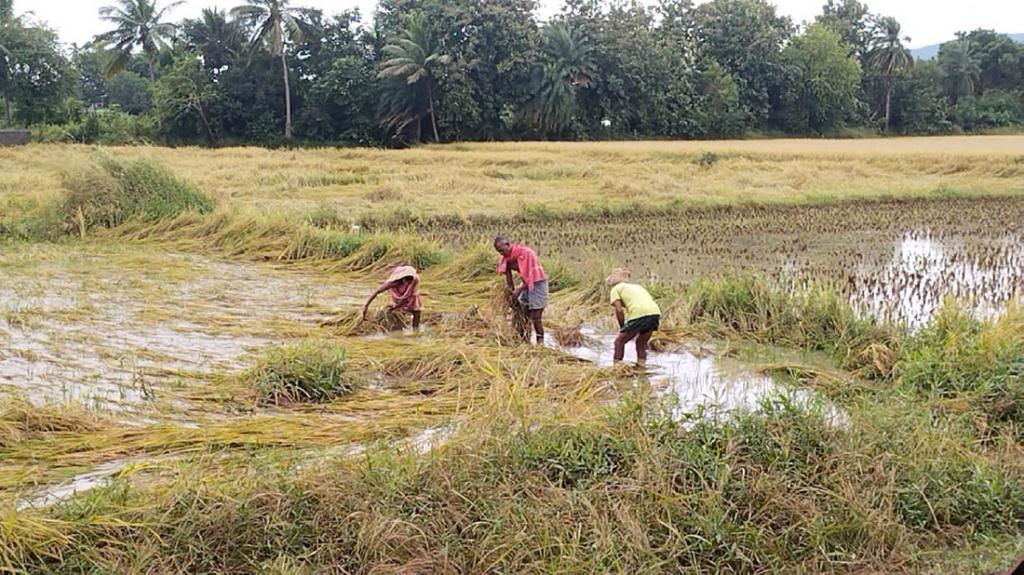 Heavy rains brought about by Cyclone Jawad have shattered the hopes of paddy farmers in Odisha’s coastal districts, who were expecting bumper crops this year.

Thousands of hectares of standing paddy have been inundated due to the heavy rains that lashed at least 10 of Odisha’s 30 districts under the influence of the cyclone from December 3-5, 2021.

The post-monsoon tropical cyclone reduced to a depression without causing any major damage to infrastructure facilities in Odisha.

“Though the cyclone spared Odisha of major damage, it brought rains across the coastal districts, causing massive damage to standing crops that were ready for harvest in different areas,” a senior officer said.

The authorities of the rain-hit districts commenced assessment of the crop damage December 6. “We have asked the district authorities to submit their crop damage reports within a week,” Pradeep Jena, Odisha’s special relief commissioner, said.

The government will announce compensation for the affected farmers after assessing the loss according to the state relief code, Odisha’s revenue minister Sudam Marandi, said.

Districts like Ganjam, Gajapati, Jagatsinghpur, Khordha, Puri, Bhadrak, Balasore, Jajpur, Kendrapara and Cuttack, which are known as the ‘rice bowl’ of Odisha, have been majorly affected.

“I had harvested two acres of land and the paddy was lying in a threshing yard. I could not keep it in a safe place. The rains damaged it,” Santosh Pradhan, a farmer of Aska, said.

Read: Storm surges and relief: Why India should rethink its cyclone response

“We don’t know how we will survive as all our hard work has been washed away in the rain,” Niranjan Mohanty, another farmer in Paradip, the area which recorded highest rainfall of 201 millimetres December 5, said.

Several farmers like Pradhan and Mohanty bore the brunt of cyclone fury in the rain-hit districts, which ended their hope of a bumper harvest this time.

Farmers in several areas were seen struggling to drain out the rain water from the cultivated areas December 6, as the sun came out after several days of rain.

The standing paddy crop which submerged in the rain water is unlikely to be harvested, Amaresh Khuntia, an agronomist, Odisha University of Agriculture and Technology, Bhubaneswar, said.

He, however, added that some crops that were about to be harvested, might have been saved after sunlight returned and farmers drained out the water.

Unseasonal rain in the first week of November in some coastal districts of the state had damaged the short duration harvested paddy. Paddy was cultivated in over 3.5 million hectares of land across Odisha in Kharif 2021.

It is not just paddy farmers. Chilli and vegetable growers have also suffered heavy losses due to the rains.

Bijay Behera of Chandabali in Bhadrak district said the cauliflowers that he had cultivated in his acre of land, were damaged.

“We suffered a lot of crop damage following Cyclone Yaas in the month of May. We had hoped to compensate for the loss this time. But the December rain ended all our hopes,” he said.

His wife Padma alleged that the paddy crop was ready for harvest. He might have killed himself after seeing the devastated paddy field, she said.

“Police are inquiring about the cause of the death,” Ganjam collector Vijay Amruta Kulange, said.