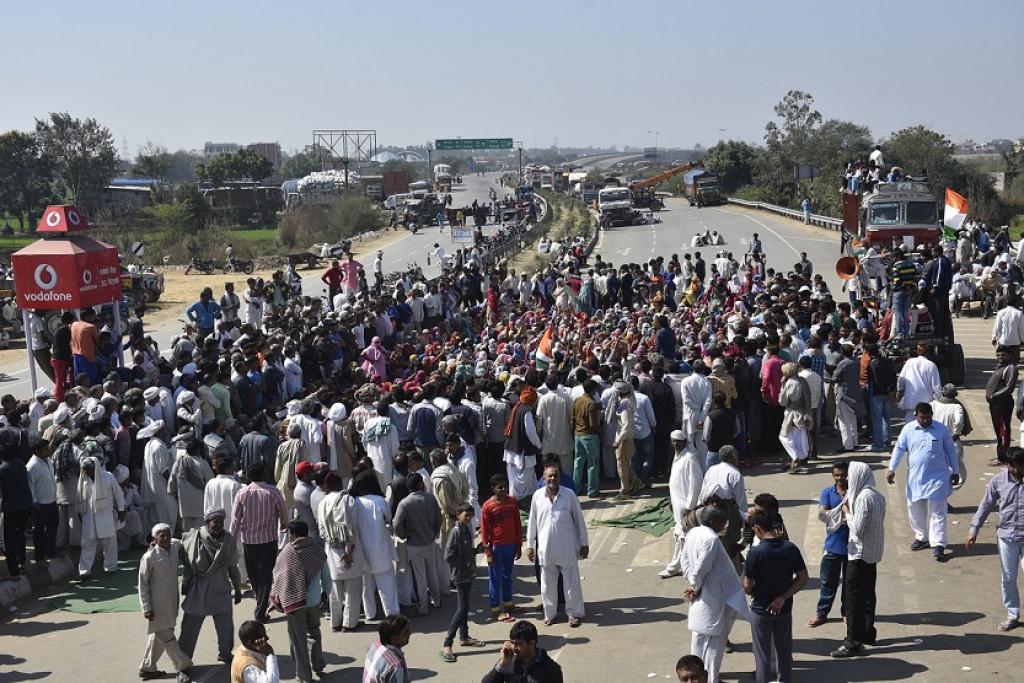 BBC London announced that the October 15 Maratha rally in Kolhapur, seat of the former rulers of the Maratha Empire, was the world's most crowded rally. New York-based Maratha population took to the streets of Times Square to show solidarity to their brethren in Maharashtra. Chief Minister Devendra Fadnavis admitted that the Maratha rallies “were probably the largest silent protest marches ever in independent India.”

Millions of Marathas have been thronging the streets and participating in silent protests for months now. Their demands include reservation in education and government jobs, amendment of The Scheduled Castes and Tribes (Prevention of Atrocities) Act, 1989 and relief to farmers who are victims of agricultural crisis. Justice for the 14-year-old Maratha girl, who was raped and murdered by Dalit men on July 13 in Ahmednagar district, is also in the list of demands.

The community, which makes up about 34 per cent of the population, accounts for only 15 per cent of government employees. What is even starker is the fact that only 12 per cent of those enrolled in higher education and technical institutes are Maratha.

In 2015, nine farmers committed suicide every day in drought-hit Maharashtra. Out of the 3,228 farmers who committed suicide in Maharashtra, it is believed that 36 per cent are from the Maratha community. Maharashtra faced drought for the second straight year due to poor monsoon and small-holding farmers have been the largest casualty. Marathwada, where the vast majority of poor Marathas live, saw more than 400 cases of farmers committing suicides in the first four months of 2016.

The Maharashtra farmers growing ragi, urad and moong dal are incurring a loss of Rs 10,674, Rs 6,663 and Rs 5,873 per hectare respectively, according to the data sourced by Devinder Sharma, a food and trade policy analyst, from the Commission for Agricultural Costs and Prices (CACP). In case of paddy, the net return per hectare every month comes to less than Rs 300. Even the cotton crop is not helping farmers much as they earn a paltry Rs 700 per hectare every month.

The common demands of Marathas from the government are waiver of loans, power subsidy and other measures to reduce agrarian stress. The protests, according to many, mirror the increasing angst of the farming community.

The erstwhile Congress-NCP government had formed a committee led by Narayan Rane that declared 16 per cent reservation to the Marathas. However, it was stayed by the Bombay High Court. In December 2014, the Fadnavis government passed a bill granting reservations. It was again stayed by the HC in April 2015 since the state has already reached the Supreme Court-mandated cap of 50 per cent on reserved jobs and college seats.

Moreover, all the three government commissions since the 1990s had stated that since the community is not politically and economically backward, it cannot qualify as an Other Backward Caste. It would also be hard for a community that has enjoyed hierarchical benefits of Maharashtra’s feudal social structure to be called “backward”.

In fact, the idea of including Marathas among the OBCs has been vehemently opposed by the Kunbis, a deprived sub-section within the Marathas included in the reservation quotas. Kunbis and Marathas have always been at loggerheads, with latter accused of discriminatory attitude towards Kunbis in some regions like Konkan.

Citing Tamil Nadu as an example, which has 68 per cent reservation, Rane said that constitutional amendments could allow Maharashtra to exceed the 50 per cent cap. 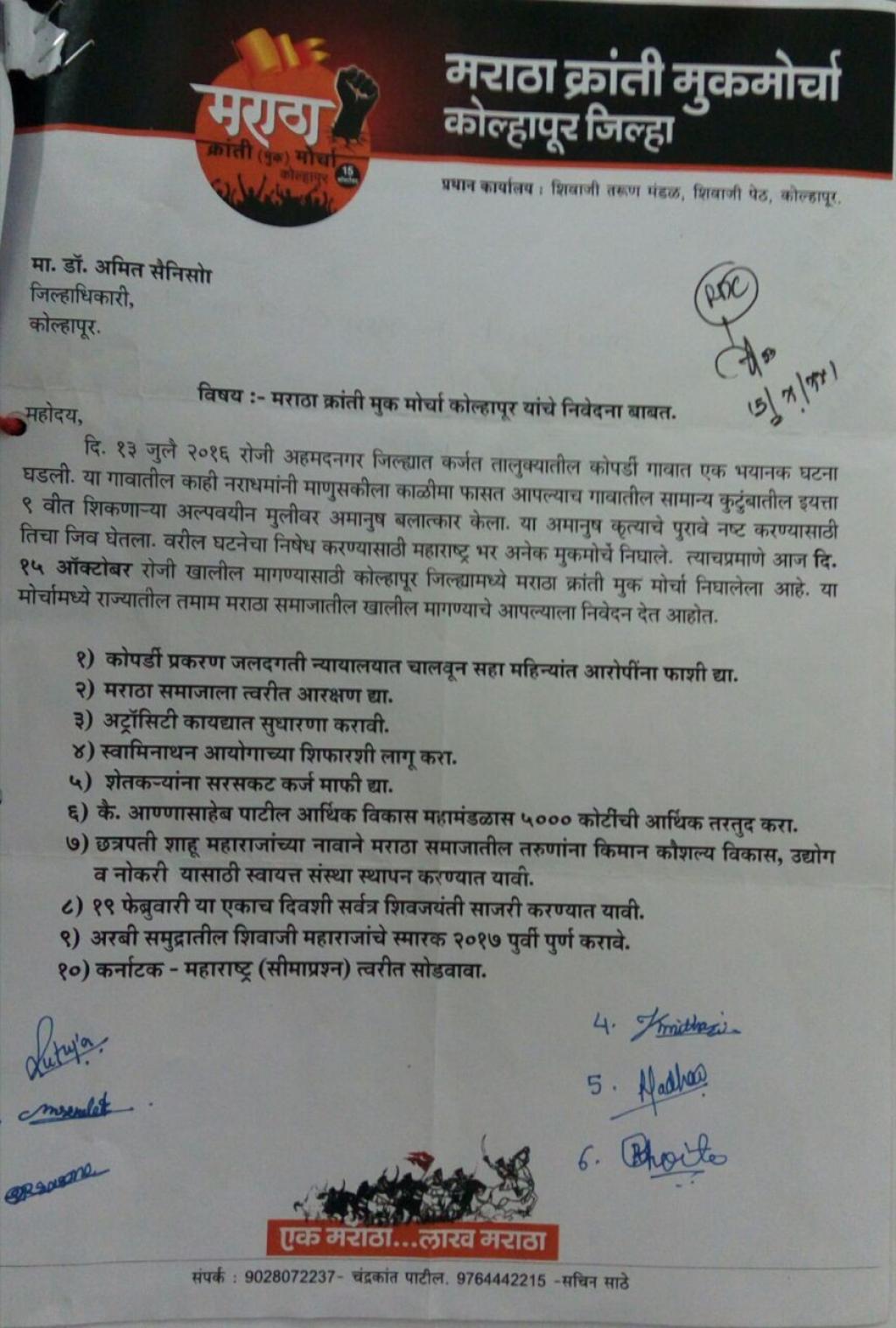 The paucity of jobs and the burgeoning agrarian crisis could be prime reasons for these protests, but a common grouse among the protesters is against Maratha leaders who failed the community. Though political and economic power remained with the Marathas, the community leaders never addressed the issue of unemployment. On the contrary, Dalits, OBCs and tribals overtook them by using quotas.

It is a common allegation that the rich Marathas got political representation but did little to pull their own community out of economic distress. The power of Marathas is concentrated in just 240 influential families. These protests, therefore, reflect a conflict within the community where the affluence of few families is misinterpreted as prosperity for the entire community. According to Dalit leader Prakash Ambedkar, grandson of B R Ambedkar and an ex-MP, "The benefits of power were not shared. Some 169 families controlled the cooperative sectors, and while they became rich, everyone else suffered."

Amendments to Prevention of Atrocities Act, 1989

The demand for making amendments to the Scheduled Caste/Scheduled Tribe (Prevention of Atrocities) Act (POA) 1989 has got stronger with every rally. There is a growing belief among the Marathas that the Dalits and OBCs are using the act to get Marathas on the hook.

Alleging that the Act is being misused to target the Marathas, Purushottam Khedekar, founder of the Maratha Seva Sangh, said that almost 90 per cent of those booked under the Act are Maratha. The Dalits have also been accused of filing false cases against Marathas to receive financial compensation for any atrocity committed on them under the Act.

Talking to Down To Earth, the District Collector & District Magistrate of Kolhapur, Amit Saini, said that their demands are varied and range from loan waiver to farmers to resolving Maharashtra-Karnataka border dispute. ‘They have submitted a 10-point demand to me. Besides seeking death penalty for the Kopardi culprits, they also want 16 per cent quota in government-run educational institutions and government jobs, allocation of Rs 5,000 crore for economic upliftment of the Marathas and a complete debt-waiver for farmers,” said Saini.

Implementation of the M S Swaminathan’s Farmers' Commission Report with regard to Minimum Support Price for grains and establishment of an autonomous institute to skill and train Maratha youths also figure prominently in the list.

“Our idea is to approach the district collectors and magistrates to convey our demands. It is to be noted that common Marathas like us have refused to seek patronage of any political party and its representatives in our efforts at scaling up this movement,” said Amit Wankhede of Maratha Kranti Morcha to Down To Earth.