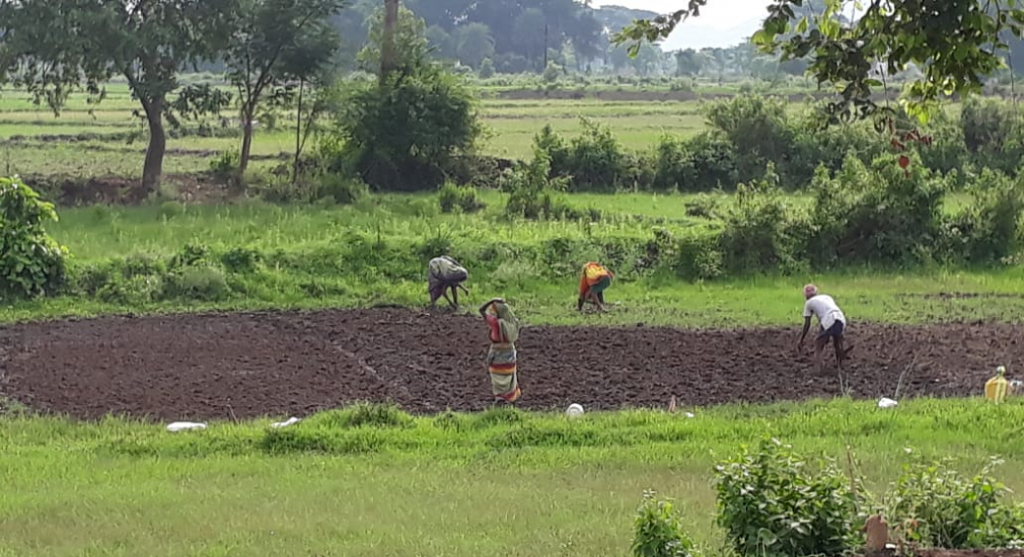 Levelling of land by farmers happening in July, much later than usual. Photo: Hrusikesh Mohanty

A dry June followed by a rainy July might delay Kharif crops in Odisha this monsoon. Farmers in several districts, mainly the western and coastal areas, have yet to start paddy transplantation due to erratic rainfall.

Through July 23, paddy was sown in 1.27 million hectares out of 3.5 million hectares planned by the Odisha government’s agriculture department for the current kharif season. This is less than half of the target, around 40 per cent.

Paddy cultivation was completed in 1.53 million hectares in the same period last year, according to a Crop Weather Watch Group report. The Union Ministry of Agriculture has set up the watch group that focusses on curative and preventive measures.

The deficiency was, however, compensated within 10 days in July. The state received 201.5 mm of rainfall from July 9-18.

“Farmers raised the nurseries in July this year due to lack of rain. The transplantation is yet to begin,” Pradhan said.

Another farmer in Chandabali in Bhadrak district has the same story. “The late transplantation of paddy might lead to losses,” feared Kishore Das.

The state saw an average rainfall of 131.3 millimetres in June, against an average of 209.3 mm. The influence of two low pressures in the Bay of Bengal on July 4 and 9 led to the rain in July, said Uma Shankar Das, a senior IMD scientist.

Four districts received excess rainfall in the same period, two districts were in deficit and the rest (24 districts) were in the normal category. Districts like Boudh, Malkangiri, Kandhamal and Dhenkanal recorded excess rain by 20-50 per cent than their average.

West Odisha districts like Sundargarh and Sambalpur registered a deficit of 38 per cent and 23 per cent through July 23, respectively.

Farmers in Koraput, a southern Odisha district, said they were satisfied with the rain this year.

“The transplanting in this area is in full swing, as the rain is almost normal,” said an agriculture officer. Around 70 per cent of the total paddy area of 86,000 hectares has been cultivated in Koraput, he said.

Cultivation of Kala Jeera, a local variety of an aromatic short grain crop cultivated by a few farmers in the district, has also not been affected.

“The variety was cultivated in around 3,000 hectares in Koraput,” said Mihir Ranjan Mohanty, the officer in-charge of the regional research and technology transfer substation.

The substation is a research unit of Odisha University of Agriculture & Technology (OUAT), an agricultural university.

Agriculture experts, however, said it was too early to predict the situation. “Kharif activities will extend to the end of August,” said Amaresh Khuntia, professor of Agronomy, OUAT.

There was hope that the situation would improve in the next month, Khuntia said.

The professor has advised farmers to cultivate the short and medium-duration varieties if there is no rainfall in the next week to 10 days.

In the Kharif season, the irrigation projects only supply around 50 per cent of water needed for cultivation. The other half depends on the rain, said JP Rath, a retired engineer-in-chief of the water resources department, Odisha.

The department has planned to provide irrigation facilities to around 2.7 million hectares of crops this monsoon.

Depending on the water level of the reservoirs and the monsoon rainfall trend, sources like deep bore-wells and check dams will be used for irrigation.

The state has around 63 reservoirs, including 10 major ones, which can irrigate up to 4.3 million hectares, sources said.