Organic livestock farming: A revolution in the making 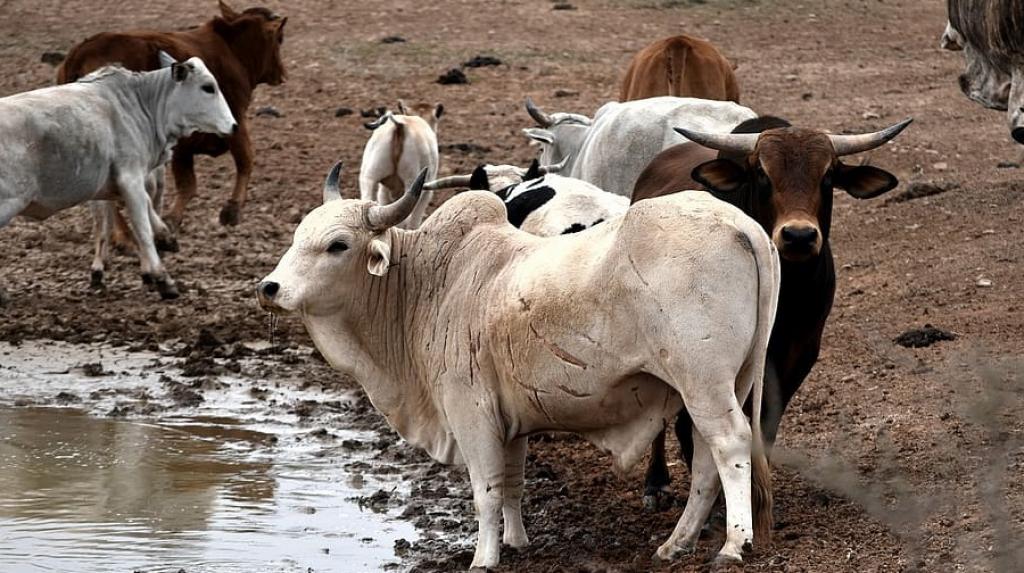 According to a recent report by organic giants FiBL and IFOAM-Organic Internationals, 186 countries of the world today are involved in organic activities. In fact, organic farmland now covers an area of more than 71.5 million hectares.

This increase definitely suggests that the farmers are no longer unaware of the benefits offered by organic farming. They are also well aware that the restrictions present in this kind of farming such as prohibition on the use of any synthetic compound, will eventually help them cut off extra expenses as well as curb pollution levels in the environment.

This will add to the income of a producer while the consumer will get safe food and surroundings, a win-win situation for all.

The already profit-making scene here gets more positively influenced when integrated with rearing of livestock to produce economic commodities. Products like milk, honey, meat, eggs etc, obtained from livestock reared on an organic farmland, given natural organic feed and routine check-ups, will help the products attain an organic tag in the market, leading to the development of trust over buyers.

Waste products like the faecal matter of livestock are utilised as manures and pesticides. Cow urine can be used as a pest repellent as well as growth promoter.

Efficient utilisation of waste matter from the livestock farm allows farmers to reduce their dependence on synthetic soil amendments from outside and thus, curb other extravagances.

Top ten countries with the highest increase of organic land 2018 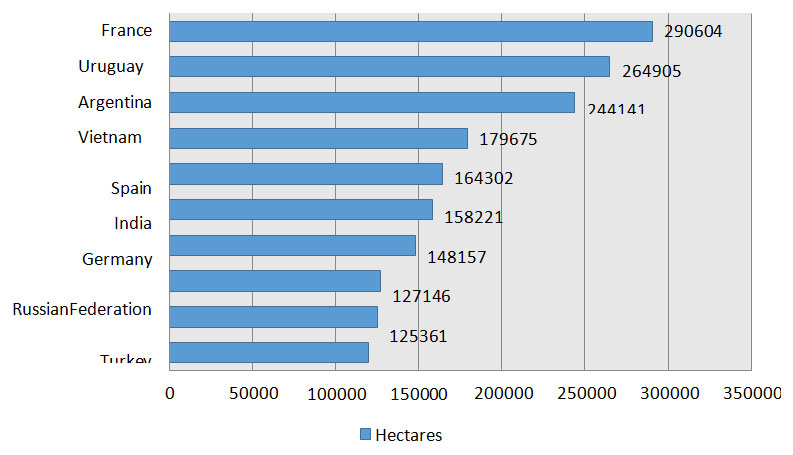 What happens when you integrate livestock to a farm?

Mixed farming is an age-old practice and our ancestors were really cognizant of the linkage between livestock and farming. That is why they lived a life closely connected to nature and its simple processes. For instance, the simple natural process of feeding cattle on a farm and utilising their waste there itself.

Due to such operations, keeping livestock on their farm actually turned out to be the right way to maintain the balance in the ecosystem. To know how, let us look at the details.

The farmer who has integrated livestock in his organic farm will never need to buy extra soil-incorporation materials. Livestock waste can be utilised as simply as manure on the farm. Sustainable Agriculture Research and Education (SARE) has stated that manures, such as those from dairy and poultry, have liming effects and actually counteract acidification. It also states that incorporating eco-friendly, farm-based animal manures could prove vital in many ways.

Another organisation, ‘Livestock and Poultry Environmental Learning Community’, reported that manure properly applied to the soil has the potential to provide numerous environmental benefits such as increased soil-carbon and reduced atmospheric carbon levels, reduced nitrate leaching and reduced soil erosion. On-field studies have shown that the surface application of organic manure acts in a manner similar to crop residues. Manure can coat the soil surface and reduce erosion inflicted by raindrops in the same way as crop residues.

Additionally, a publication from the Michigan State university has indicated that carbon and other essential nutrients present in the manure can increase the microbial biomass and soil respiration rate by two-three times.

The same publication recently opined in a review that adopting organic manure amendments would result in enhancing the functional diversity of the microbial population, which is the key to soil nutrient cycling. 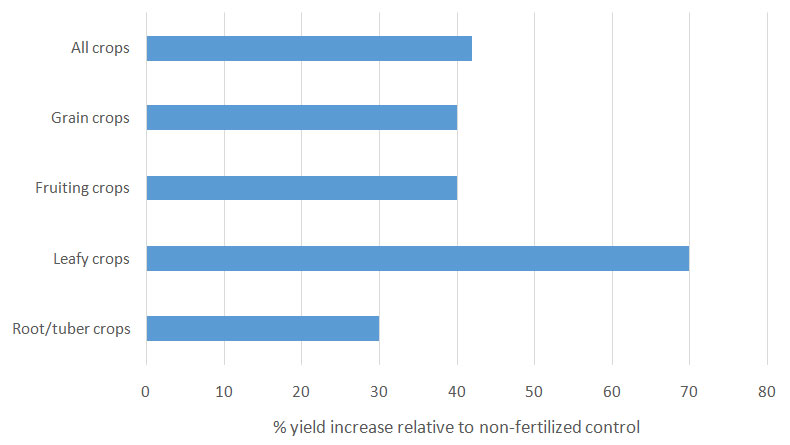 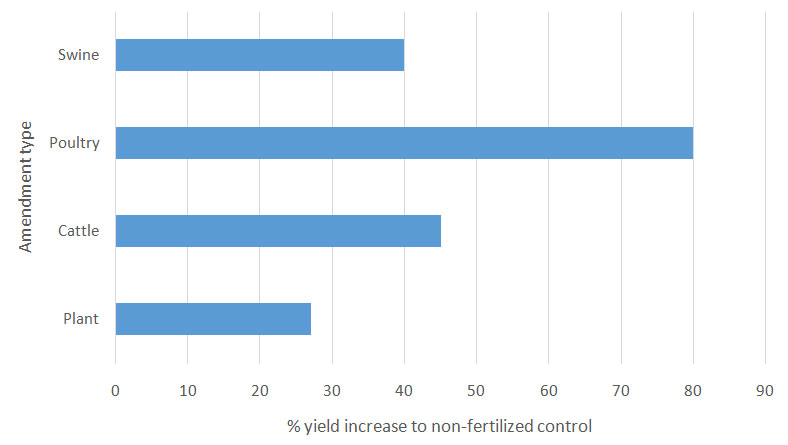 Effective manure amendment results in developing the soil biological system that comprises of larger soil organisms, such as protozoa, and many other invertebrates including nematodes, mites and earthworms.

This sustainable manure amendment in the soil will help in suppressing the all-important disease-causing soil-borne pathogens and pests. To further support this statement, a case study has been put forth by Conn and Lazarovits (1999).

They found that the use of liquid swine manure reduced the incidence of wilt and common scab in potato fields. Various on-going research studies indicate that timely and accurate application of manures promote the growth of antagonistic microorganisms that could potentially deter pathogens. According to Bailey and Lazarovits (2003), the presence of high concentrations of volatile fatty acids in the manure constricts the soil-borne pathogens present in the soil.

Most farmers consider organic amendment as a long-term investment in the soil but the results have demonstrated a clear substantial growth even in short-term benefits. Additionally, field and agriculture experts recommend to use locally available natural organic components. However, compared to cattle and swine manure, poultry manure has shown clear dominance in N-richness.

Along with that, a survey data of the year 2020 by FiBL shows that on an average, a person in Denmark and Switzerland spends 312 euros per year to buy organic products. Though the Indian organic market may appear less encouraging with estimates around 186 million euros now, in the future, we can expect a large bounce in the statistics due to high potential. 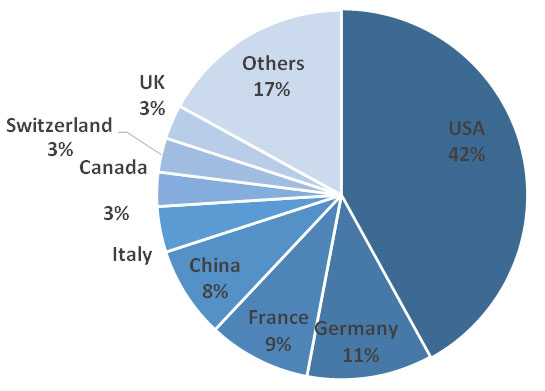 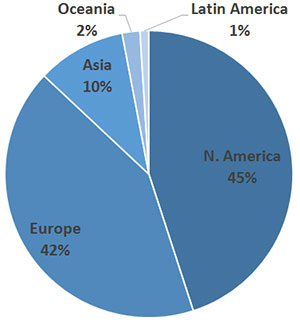 In the European Union alone, there is a huge demand for organic farm products as well as for the products from organic livestock. The data from European Commission 2019 reveals that about 17,871 MT of organic eggs and honey, 5,828 MT of organic fish, 453 MT of organic non-edible animal products, 132 MT of organic sheep and goat meat and 19 MT of organic pork are being imported every year in Europe.

Therefore, it is evident that even with a large number of organic livestock, the European Union is unable to fulfil the demand for products obtained from organic livestock. This makes the venture more mercantile.

For instance, co-relating with the global organic producers enables the small-scale farmers to realise the true potential and market value of their organic harvest. Not to forget, the environmental and socio-economic impact of organic products on the consumer society.

Minimising the exposure to hazardous chemicals and persistent monitoring on the growth of organic produce have brought in a significant influence on improving the consumer health index. Organic livestock production aims at producing environmentally safe and chemical-free food products through cultural, biological and mechanical practices.

Not to mention, the high animal safety welfare standards which they follow (Codex Alimentarius commission, 2007). Traditionally, the comparison between organic livestock farming and the conventional one is made upon various demanding aspects such as environmental impacts, influence on public health, market potential, safety and nutritional standards, animal health welfare and social sustainability.

Organic prices are generally stated high over the conventional produce in the market, solely because of their nutritional quality and freshness of the produce. However, the price label has never really impacted the long term run of the organic market at global scale.

The rate of consumption of organic products and the demand for supply is growing ever so high. Retail chains around the globe are seizing this opportunity to expand their trade market and revenue.

Organic livestock production is often regarded as an important pillar of sustainable rural development. This is because, the organic production model generates more positive and sustainable externalities than the conventional model. The Organic production system not only creates an income, but it also promotes the conservation of agro-ecosystems on a long-term perspective.

Apart from this, what really makes a low-input farming (organic) more productive and a safe alternative to many other practices around? Well, the answer is the stable economy it offers to the farmers both on and off the field.

In addition to this, farmers experience job opportunities, farm profitability, and long-term income. Another fascinating thing about organic livestock farming is its active contribution towards building a stronger economy focused on reflecting the livelihood of rural communities.

In the Northeast and Upper Midwest regions of the US, organic dairy farms have reportedly contributed more compared to the conventional dairy farms in terms of sustainability of the local economy and development of rural communities.

Pasture-based livestock farming has a lot of beneficial impacts on the ecosystem in general. Since both the systems are mutually attached, they often come out with numerous positive reforms, such as increased carbon sequestration, enhanced quality of pastures and lowering the risk of fire.

Efficient utilisation of water resources on the farm is another vital parameter to look into. A lot of farming practices are carried out at rural level where the water availability is often at stake. Organic farming models have proven more water efficient in terms of usage and retention on the field which leads to develop resistance against drought.

The potential to preserve biodiversity is really what separates organic livestock farming systems from the conventional ones. Reduced use of external inputs, enhanced nutrient cycling, precise and active dependence on non-renewable resources have built in a stronger backbone to this system.

This would also enable the system to renew all the existing natural resources around, such as water and soil. Organic livestock systems have reportedly contributed low GWP (global warming potential) compared to the conventional model.

Now, if we compare the milk production and feeding ratio from the organic livestock farming to the conventional one, sources show that greater milk production is observed in organic farms with low feed supply to the animals.

In contrast, the non-organic farms invest on doubling the feed supply, which results in greater extravagance on feed purchase. According to Keifer et al (2014), the organic dairy cow farms have performed better than those conventional ones in terms of economic reliability, long term sustainability etc.

Animals' physical health is also another important parameter to consider while adopting various novel farming practices. In this sense, engaging the various livestock units under the organic model would help in improving the overall health conditions of livestock.

For instance, organic livestock are observed with low calf mortality rate, less reports of mastitis, and abortions. In addition to this, pigs raised under the organic system respond with low respiratory issues and tail wounds. Organic livestock systems (when pasture-based and low-input) are more socially and environmentally reliable.

In a world where the vast majority of the population is being deprived of food security, it is vital to look into organic food supplies that would establish a healthy nutritional profile among its consumers.

However, for this to happen, we must look to spread a positive framework of knowledge among the farmers regarding various sustainable farming approaches, that would eventually bring the food insecurity crisis to a bare minimum.

Therefore, ensuring a profound balance in the functionalities between the organic suppliers and the global market might just turn out to be most influential revolution the human race has ever encountered.