The Food and Agriculture Organization (FAO) has flagged the growing practice of monoculture —cultivation of a single crop at a given area — in food production around the world.

Of more than 6,000 plant species cultivated for food production, fewer than 200 contribute significantly to food production globally, regionally or nationally, according to FAO’s latest report The State of the World’s Biodiversity for Food and Agriculture 2019.

“In many parts of the world, biodiverse agricultural landscapes have been, or are being, replaced by large areas of monoculture, farmed using large quantities of external inputs such as pesticides, mineral fertilizers and fossil fuels,” the report said.

It lists drivers of change affecting biodiversity for food and agriculture, including:

The first factor contributor majorly towards monoculture — as people move to cities they tend to depend more on purchased foods, citing the example of Ecuador.

“They often also tend to lose ties with rural areas and rural foods, and increasingly opt for processed foods rather than fresh foods. Markets may also impose requirements,” the report said.

This pressures producers to “continuously grow or keep only a limited range of species, breeds and varieties of crops, livestock, trees, fish, etc.”

Individual holdings as well as wider productive landscapes become more homogeneous in terms of their genetics and physical structure, the report added.

Such changes often affect the resilience of production systems and their role in biodiversity. Private food standards adopted by supermarkets and consumers have pushed farmers towards particular varieties and management procedures.

“International markets may be particularly restrictive and impose specific requirements for market entry… effectively debar the entry into the market of minor crops from developing countries,” according to the report.

The “emphasis on meat-based diets and the use of a narrow range of major cereals (maize, wheat and rice)” is growing. The report predicts that the demand for standardised foods can reduce the diversity of crops and animals.

It talks about how rural-to-urban migration is more common among working-age men. As the proportion of the elderly and women rise in villages, cropping systems are abandoned for pastures and livestock, requiring less labour. “This is reported to have led to a decline of crop genetic diversity.” 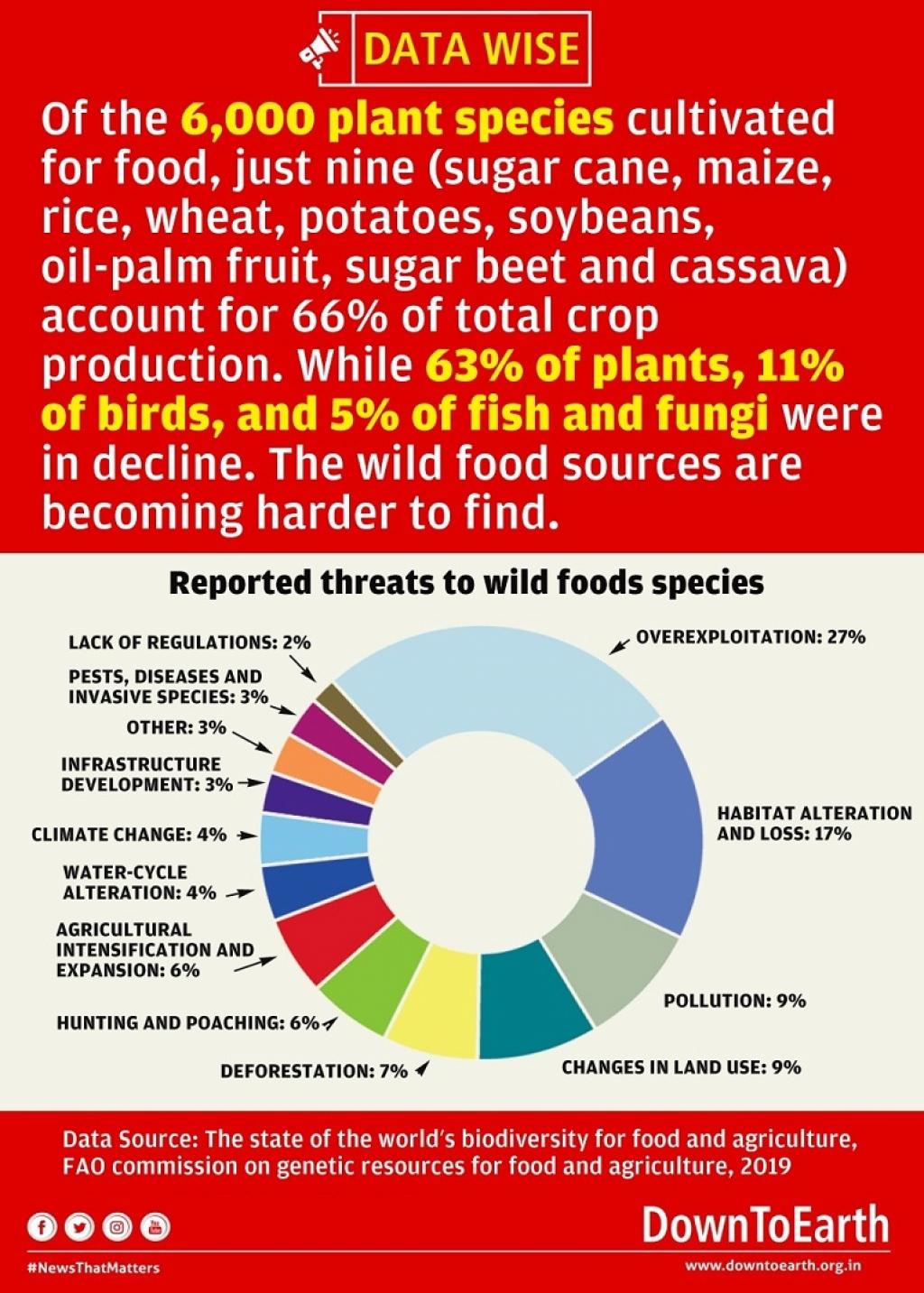 The diverse the better

“If a single variety is widely grown, a pest or disease to which it lacks resistance can lead to a dramatic fall in production. If livelihoods are heavily dependent on the species in question, the effects can be disastrous,” the report warns. Examples:

Diversifying crop cultivation, on the other hand, reduces risk of economic shocks: “Integrating intercrops, hedgerows or cover crops, particularly legumes, into a system can reduce drought stress by helping to conserve water in the soil profile and help to replenish depleted soil fertility.”

Also, “crop diversification, including rotation and intercropping and the use of diverse forage plants in pastureland, can reduce pest damage and weed invasions.”

The growing exploitation of land and water sources was eating in to integrated aquaculture, which in turn was pushing farmers towards monoculture, the report said.

Effective diversification strategies can be implemented through “support from national agricultural extension systems, clear identification of benefits for producers and a willingness to build producer capacity and knowledge,” according to the report.

It stressed on monitoring the effectiveness of diversification projects and programmes from various perspectives, “including overall effectiveness in terms of productivity, livelihoods, sustainability and effects on the status of Biodiversity for food agriculture”.