SC: Farmers, not banks, have first right over proceeds from sugar sales 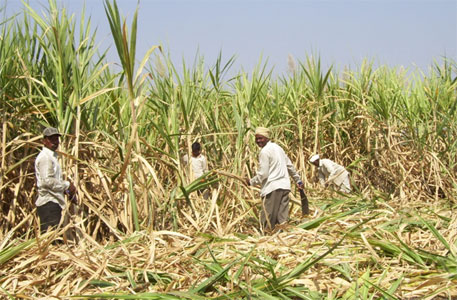 Sugarcane farmers in Uttar Pradesh will have the first right to recover their dues from the sale of sugar by sugar mills, the Supreme Court (SC) ruled on Monday. The mills have been instructed to sell their stocks by October 31 in order to clear farmers’ dues.

The ruling confirms the Allahabad High Court order of September 5, asking mills to pay farmers’ dues by selling the sugar stocks that were hypothecated to public sector banks against loans given to them.

The apex court was hearing petitions filed by the State Bank of India (SBI) and Punjab National Bank (PNB), which had challenged the high court order. The banks had petitioned the SC on the grounds that as creditors, they had the first right over the proceeds realised from the sale of hypothecated sugar if mills failed to repay their loans. SC, however, held that right to life of farmers prevailed over the right of banks to do business.

While sugar mills have borrowed around Rs 3,000 crore from SBI alone, they owe around Rs 2,800 crore in dues to sugarcane growers.

The SC observed that farmers are in financial distress due to the non-recovery of dues from the supply of sugarcane to mills. "If money does not go to the farmers, they commit suicide," the court said.

Some 750 farmers committed suicide in Uttar Pradesh in 2013, following unpaid sugarcane arrears from mills and a deficient monsoon, according to a report.

“This is a historic day for farmers because since independence, the first right on sugar was with the banks. The Supreme Court has recognized that this right lies with the farmers. This will go a long way in solving the problems that cane farmers face,” V M Singh of Rashtriya Kisan Mazdoor Sangathan (RKMS) said in an interview to Mint. It was a PIL filed by RKMS that led to the Allahabad High Court order.