Smart device developed for precise use of herbicides 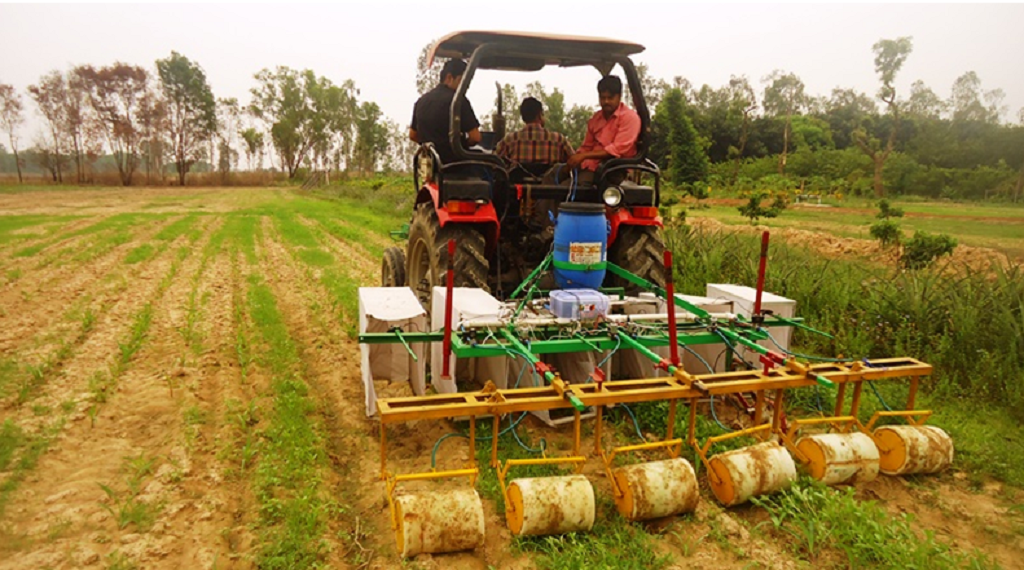 The device is not yet ready for the market as researchers still need evaluate the prototype and make its processing unit more robust, Credit: Author

India loses agriculture produce worth several hundred crores of rupees every year to weeds. While removing weeds manually is laborious, use of chemicals to destroy them is hazardous to environment and crops. A group of Indian and American researchers have developed a weed removal device for precise application of herbicide that can reduce crop damage and contamination.

The tractor-mounted device releases precise amount of herbicide after sensing weed density through image analysis. Amount of herbicide varies for every 5 per cent change in weed infestation unlike the conventional system that uses same amount of chemical on a given plot. The device has been developed for crops with row-to-row spacing of 350-450 millimeters.

Field experiments on dryland with groundnut and maize crops have shown that the use of the device increased production, reduced crop damage and also saved around 80 per cent of the herbicide as compared to conventional systems of herbicide use.

“We have used sponge rollers which apply the herbicide through contact with weeds instead of spray done by conventional devices. This technique overcomes losses due to chemical drift and soil percolation resulting, which reduces environmental contamination,” explained Abhilash Kumar Chandel, a member of the research team, while talking to India Science Wire.

While contact-type weed eradicators have been developed in the past, this device introduces variability to the dose of herbicide in proportion to weed density. The apparatus includes a storage tank, pipelines, cameras, deflectors, ground wheel and sponge rollers, all connected to the back of a tractor moving at a speed of 2.1 km per hour. The processing unit consists of a laptop with digital image analyser application.

The herbicide can be applied simultaneously in six parallel rows which are served by a camera and sponge roller each. The main crop is restricted from field of view of the camera through deflectors so that only weeds appearing between the rows is captured by the cameras and treated with the herbicide thus ensuring minimum crop damage.

The yield coefficient of the plots of two crops treated with the device was higher than the plots where CSA and CCA were used. The results have been published in journal Current Science.

The device is not yet ready for the market as researchers still need to evaluate the prototype and make its processing unit more robust. “We want to replace the laptop with a small analytical device which will also reduce the cost. The reliability and feasibility of the weed eradicator needs to be tested for other crops as well,” said Chandel. The research team also wants to offer a variant of the device which can be handheld since many farmers can’t afford to use tractors.

“The actual efficiency of the device will only be known when it comes to the field as there are several factors beyond technology which can determine its performance. It also needs to be affordable for the farmers,” commented Vikram Ahuja of Zamindara Farm Solutions, a Punjab-based farm equipment company.