Ravines such as these have started appearing in Sarnal village of Gujarat’s Kheda district. Photo: Adithyan PC

The ravines have always been there, lining the riverbank, but after the floods in 1973 they started expanding towards the village,” says 73-year-old Chaggan Bhoi of Sarnal village in Gujarat’s Kheda district. The village is barely a kilometre from the Mahi river in central Gujarat.

“That year, it rained for 24 straight days and the water from the river entered the village, forming a maze of streams. Since then, massive soil erosion has happened, mostly on the periphery of the village. Residents fear that if left unchecked, the ravines would swallow the village and they might have to migrate,” Bhoi adds.

Kheda is one of Gujarat’s four districts — Panchmahal, Vadodara and Anand being the others — severly affected by expanding ravines. This monsoon season, the region saw heavy rainfall due to which new ravines have been formed in Khadol, Gadia and Rania villages of Kheda and Nani Sherdi of Anand.

In the last four to five decades, ravines have increased by 60-70 per cent in the four districts, estimates Satish Macwan of Foundation for Ecological Security (FES), an Anand-based non-profit working to check soil erosion.

“Nearly 30,000 hectares (ha) is currently affected by extreme land degradation and 'ravination' and the rate is increasing. A decade ago, the figure was 20,000 ha. Every year, there is a loss of about 0.58 million tonnes of soil due to erosion,” Macwan adds.

Ravines in India are a geological feature formed millions of years ago when the peninsular plate pressed against the Himalayas. Almost all of India’s ravines are found in the vicinity of the Vindhyas, with over 60 per cent being in Uttar Pradesh, Madhya Pradesh, Gujarat and Rajasthan, as per the National Remote Sensing Centre, Hyderabad.

However, ravines get aggravated by soil erosion, mostly caused by a flowing waterbody. The adjacent land gets eroded to form narrow depressions with sharp slopes. Over time, ravines widen, rendering land uncultivable and infertile with the erosion of the topsoil. 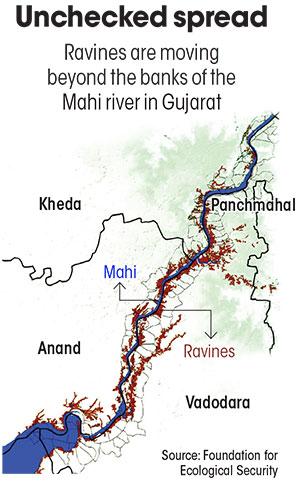 Parts of these four districts form the second largest ravines in India after the Chambal region of Madhya Pradesh. “Undulating topography and loose soil structure, along with increasing loss of vegetative cover, has led us here,” says Chetan Jha, team leader, FES.

“The destruction started after Independence, when people encroached upon forestland and felled trees to farm. Earlier, districts like Kheda had huge forest cover. Now when rain falls, the arable topsoil gets washed away,” says Macwan.

“I have lost 0.3 ha of my 2 ha farmland to ravines in the past five years,” says Nageen, 62, of Sarnal. “I talked to government officials, who visit our village, about any scheme under which I could get some monetary assistance for ravine reclamation. I was willing to bear 50 per cent of the cost but did not get any help,” he recollects.

The reason Nageen could not avail help from a government scheme for ravine reclamation is that Gujarat does not have one. With the rest of his farmland also partially eroded, Nageen has given up full time farming and only grows fodder crops for his animals.

“There is a need for a country-level ravine reclamation programme,” says SK Singh, director, National Bureau of Soil Survey and Land Use Planning, Nagpur. "There is a programme for management of river courses but it doesn’t cover ravines,” he adds.

“The government has money but no planning,” says Dinkar Panchal, field coordinator, Kheda, FES. “Madhya Pradesh has a dedicated programme for ravine reclamation but in Gujarat most work is done under other government programmes, such as the Mahatma Gandhi National Rural Employment Guarantee Act (MGNREGA),” he complains.

This approach has its own limitations. MGNREGA is mostly related to construction of roads or infrastructure building and ravine reclamation is not a priority. “The magnitude of erosion is so huge that it requires a lot of investment. Even short-term land levelling is cost-intensive. Reclaiming land under MGNREGA is just not enough,” says Macwan.

“At the village level, people or small groups should be given long-term tenure rights over the village commons land they reclaim. Then they would feel a sense of ownership,” he argues.

FES has been working in the region since 1987 and is currently undertaking initiatives in about 60 ravine-affected villages in the four districts. Along with the help of community members, the organisation primarily focuses on using low cost soil and water conservation measures to check ravines.

The two things that it has done extensively are building check dams in affected areas and large-scale bamboo plantation. Small earthen check dams in gullies prevent the ravines from spreading, and as the silt keeps depositing, the degraded land gets levelled. On the other hand, plantation of the fast-growing bamboo helps in arresting the run-off.

“Indian Council of Agricultural Research is already talking about bamboo plantation in ravine-affected areas. It has identified some spots and the suitable species. The plan, however, is yet to be executed,” says Singh. “We also need a comprehensive study of country’s ravines. We cannot manage them unless we understand their formation and the local variables,” he adds.