State cracks down on farmer protest, lookout notices against 44 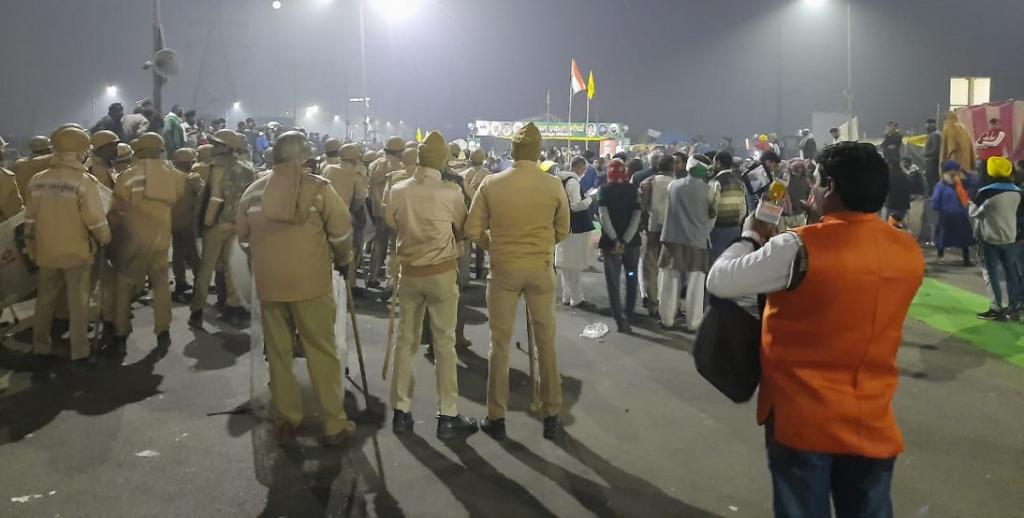 The government started to crackdown on farmer leaders and at protest sites January 28, 2021 two days after the violence during the Republic Day tractor rally.

The Delhi Police has issued notices since January 26, 2021 to different farmer leaders including Darshan Pal, Balbir Singh Rajewal, Rakesh Tikait and Jagmohan Singh, asking them to explain as to why legal action should not be taken against them for “breaching the agreement with police” regarding the rally.

Things also heated up at the Ghazipur border between Delhi and Uttar Pradesh, where the local administration asked farmers to end their protest and vacate the protest site by the night of January 28.

Bhartiya Kisan Union (BKU) spokesperson Rakesh Tiakit, who has been camping at the border for almost two months, said the farmers will continue the sit-in protest.

Police deployment was scaled up at the border on the evening of January 28. Tikait said the administration also cut off power and water supply to the hundreds of protesting farmers on the night of January 27.

The umbrella group of farmer unions, the Samyukt Kisan Morcha (SKM), condemned the action by Uttar Pradesh police in cutting off basic facilities for the protesting farmers at Ghazipur and its attempts to evict the farmers forcibly January 28.

It said in a statement:

People sponsored by the Rashtriya Swayamsewak Sangh and the Bharatiya Janata Party came to the Ghazipur site and leaders explained to the public to remain peaceful against the government connivance to sabotage the farmers’ struggle. Leaders explained to the public about the government’s efforts to continue to discredit the farmers’ movement. SKM also strongly condemned the eviction of protestors at Palwal where the police instigated locals and flared up divisive sentiments

It added that the “nervousness of the government” was evident from how it was installing security forces on all borders.

“Instead of taking action against the real criminals, the police is instead arresting farmers who were protesting peacefully. Police has also seized their vehicles. The Samyukta Kisan Morcha demands that all peaceful protesters should be released, immediately and unconditionally,” it said.

Security was also beefed up at the Singhu border where tensions rose during the day as a group of people claiming to be residents of the area got past the security cordon and demanded that the farmers be evicted as they were facing inconvenience because of the protest.

Protestors also said police had damaged some of the camps at the protest sites, an indication of the government’s attempt to crack down on protestors after two months of peaceful agitation.

The internet services that were cut off in parts of Delhi January 26, have not been restored completely till now at Singhu and other protest sites, protestors claim.

Meanwhile, Punjab Chief Minister Amarinder Singh, in a statement on microblogging site Twitter on the evening of January 28, blamed Delhi Police for using the Republic Day violence as an excuse to harass genuine farmers.

Delhi Police should not use the violence on 26th as an excuse to harass genuine farm leaders in order to weaken the agitation. Lookout notices against them must be withdrawn, They’re not corporate raiders like Vijay Mallya or Nirav Modi, but small farmers. Where will they flee?